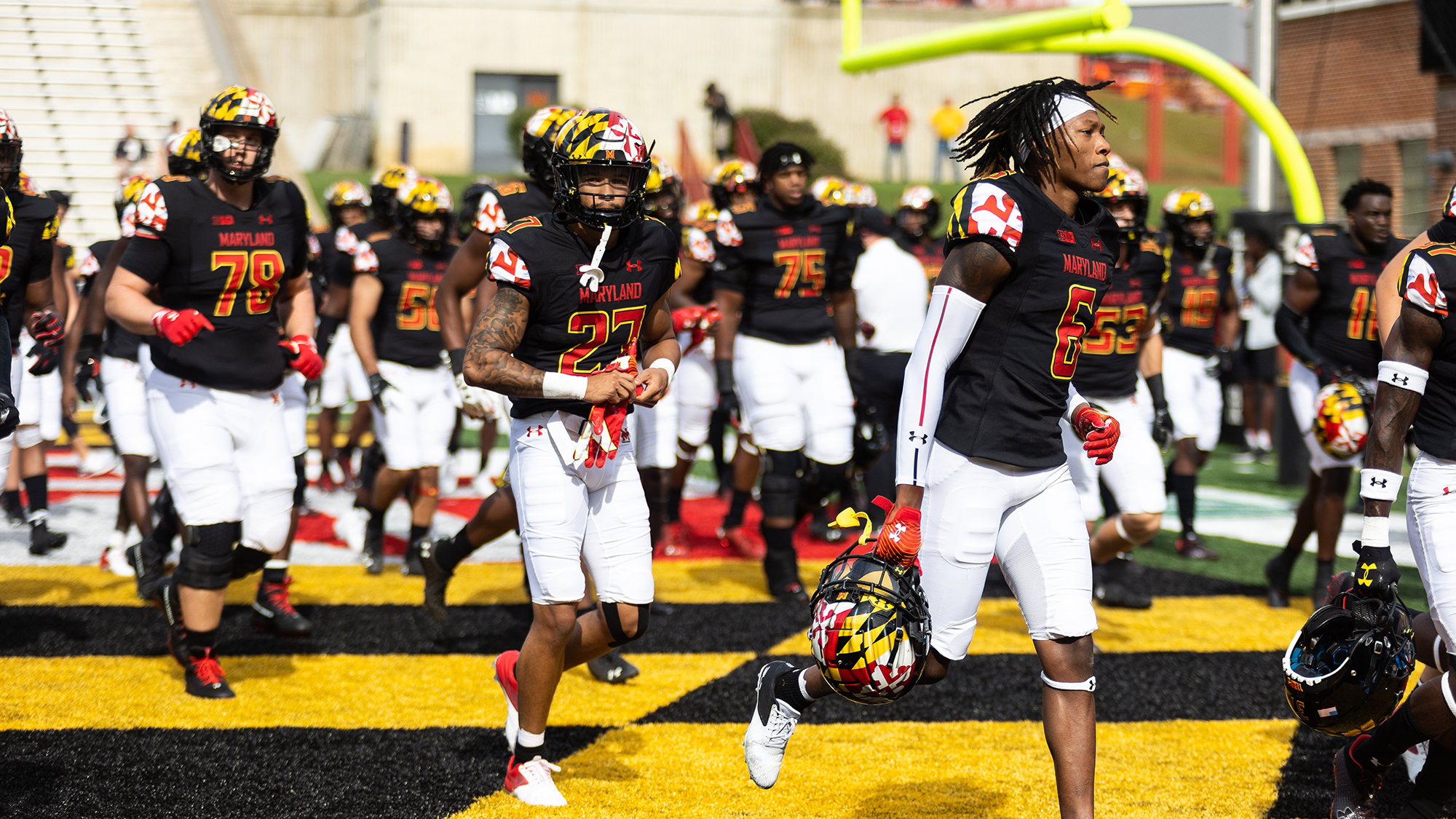 Maryland football players run off the field prior to the Terps' 37-16 victory over Kent State on Sept. 25, 2021. (Julia Nikhinson/The Diamondback)

Some professors at the University of Maryland are not following Provost Jennifer Rice’s recommendation to move their classes online this Friday before a football game against the University of Iowa, which is expected to bring increased traffic to the campus.

Rice sent the recommendation in an email to faculty on Sept. 20. The recommendation has elicited mixed reactions — while some say it’s unavoidable, others are frustrated with the university’s approach.

Patrik Widrig, a dance professor in the theatre, dance and performance studies school, teaches a class each Friday from 1 p.m. to 2:30 p.m. He and his students decided together that they would not follow the provost’s recommendations and instead move forward with an in-person class this week.

“We had over a year of online, and everybody is so happy and grateful to be back in person. We didn’t want to [go online],” Widrig said.

The class Widrig teaches on Fridays is highly interactive and hands-on, so it works best in person, he said. When he surveyed his students, most said they were not worried about traffic when leaving because they would not be driving, so Widrig decided moving online for Friday would not be worth the hassle, he said.

Tim Jacobsen, a photojournalism professor in the journalism school, also opted not to move online. Instead, he will dismiss his afternoon class — which normally runs from noon to 2:45 p.m. — early, at 1:30 p.m.

“For the class that I teach, there’s just a lot of individual interaction,” Jacobsen said. “It’s just easier for students to ask questions when we’re in class together.”

For Chris Lewis, a lecturer in the languages, literatures and cultures school, the issue extends beyond just this Friday.

To him, the university expecting professors to change their schedules means they prioritize football over academics, he said — a pattern he has also seen when the university spends money on new sports facilities but not to update old academic buildings or classroom technology.

“We just got done doing a year worth of online instruction, and the university emphasized over and over again the importance of in-person instruction,” Lewis said. “If they really believe that, I don’t think that they would be … telling us to teach online just to facilitate a football game.”

Lewis thinks the university’s entire approach to sports games this year is hypocritical. He is frustrated the administration emphasizes social distancing and mask-wearing during the week but seems to abandon those rules come football games.

“As soon as we have a football game, they’re not enforcing any of the rules that we seem to have during the rest of the week,” he said.

Other community members also expressed frustration over the provost’s recommendation and other logistics for the game. In a Reddit post, some people expressed irritation over the university requiring them to move their cars to make space for game parking.

In Rice’s email, she wrote that some parking lots would be closed to the general public starting at 2 p.m. Friday to prepare for game parking. Alternative parking would be available to those who decided to stay on the campus in person, Rice said.

Widrig feels the university’s communication about these alternative options was unclear.

“I don’t remember getting an email about that recommendation,” he said. “I didn’t feel informed.”

To avoid inconveniencing faculty and students, Widrig said he thinks the university should just cancel classes entirely if a Friday football game ever happens again.

Jacobsen wants the university to avoid Friday football games altogether to limit inconveniences. But for now, community members just have to live with the potential challenges, he said.

“Whether people like it or not, there’s a lot of revenue being brought in that way,” he said. “We just have to swallow the pill for once.”