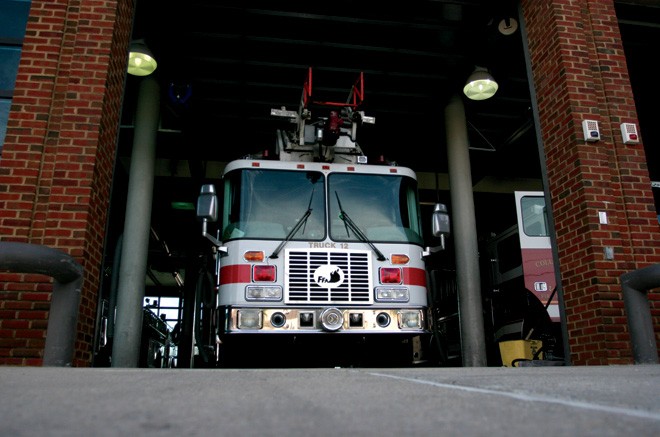 Members of the Tri Delta sorority evacuated their sorority house on Wednesday at about 6 p.m. after a fire broke out in the basement, according to the Prince George’s County Fire Department spokesperson Michael Yourishin.

The sorority house’s sprinkler system put out the bulk of the fire, Yourishin said. Nobody in the house was injured.

“It just goes to show you the importance of having a sprinkler system in buildings like that,” Yourishin said.

Members of the sorority were evacuated for about an hour after the fire started in a dryer in the laundry room, said Tri Delta member Ellie Laffargue.

Tri Delta president Molly Garber, a junior government and politics major, said the dryers aren’t particularly old, but they do get plenty of use with about 40 residents and three dryers. Laffargue, a junior public health science major, was in her room watching “Gilmore Girls” when the house’s fire alarms went off. At first, she thought it was one of many false alarms that occur in the house when sorority members blow dry their hair or accidentally set the alarms off, she said.

Laffargue said she darted down the stairs without shoes on after she heard the house chef scream at residents to evacuate.

“Everyone evacuated really quickly,” Garber said. “People were just a little confused and overwhelmed, but everyone was fine to my knowledge.”Once it was safe to return back into the building, Laffargue says many of the residents noticed smoke in the hallways and in their rooms.

“Even when we were allowed back in, a lot of girls stayed outside because of how bad it smelled,” Laffargue said.

Garber said there was no evidence of smoke damage in the hallways and rooms. Members of the house left doors and windows open for a few hours after, which cleared the leftover smokey odor.

The laundry room is off-limits to residents for the next couple days due to smoke and water damage from the sprinklers, Laffargue added.

Amit Itzhaki, a sophomore computer engineering major, said that after she evacuated, she was nervous that not all of the residents had made it out of the house.

“I was worried someone was sleeping or listening to music or something and they didn’t hear the alarm, but fortunately, everyone had left the building,” Itzhaki said.

At the end of June, Itzhaki’s home in New York flooded, displacing her family. While evacuating Wednesday night, she was worried that she — and her sorority sisters — would be in the same situation.

“I was like, ‘There’s no way this is happening to me again,’” Itzhaki said. “You should feel safe in your own house. So when stuff like that happens, it’s really alarming. But safety has never been a problem here and … I’m really grateful for that.”