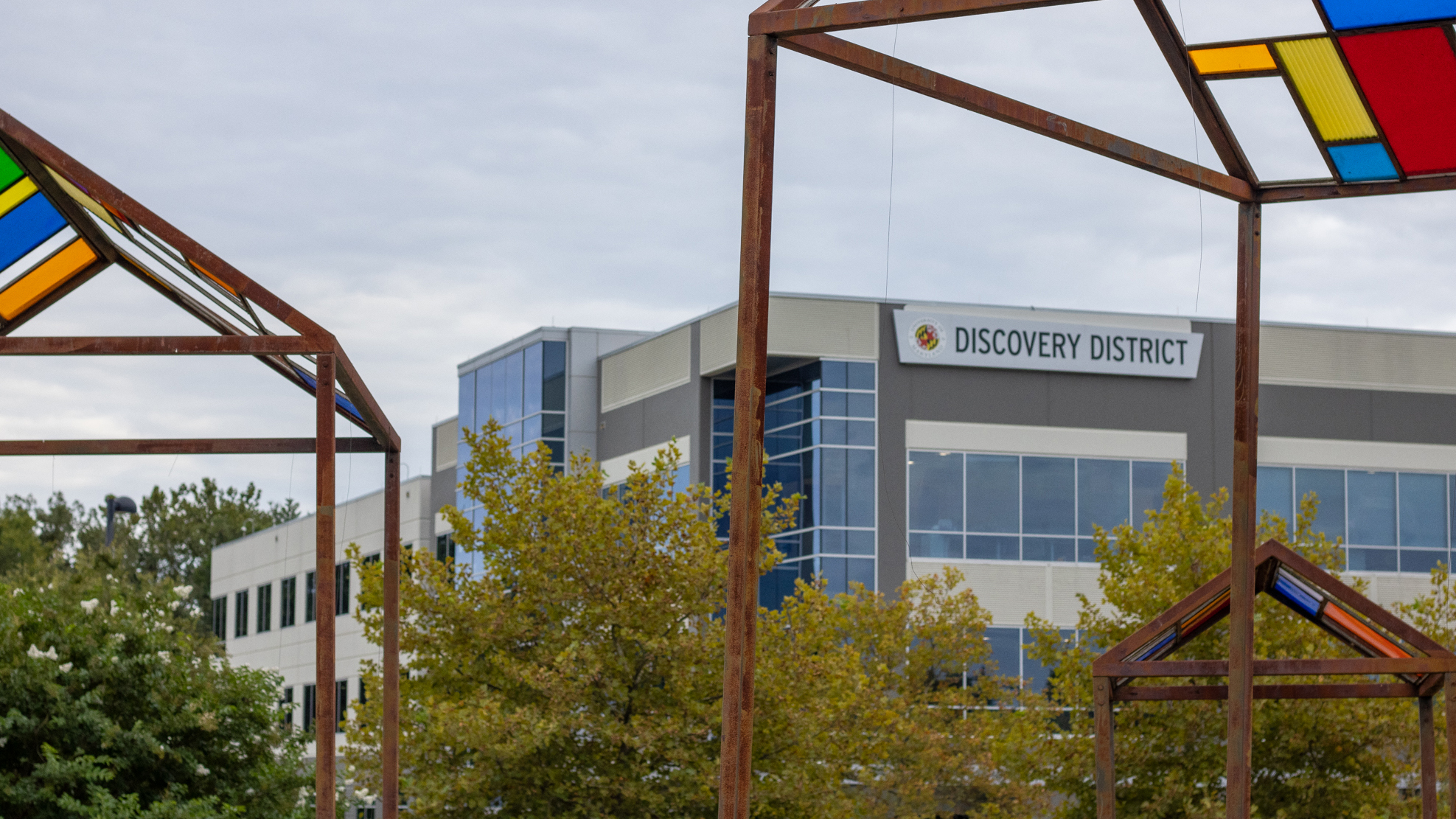 When engineering company Loccioni first began business during the 1970s in Italy, it was difficult to recruit systems engineers. At the time, the economy of the region where the company was located centered largely around agriculture, and so the then-startup company needed to carefully strategize to find talented engineers.

Now that the company has a presence in the Discovery District, it has been able to take advantage of its proximity to young talent from the University of Maryland’s business and engineering schools and to high-tech companies in different industries. Young engineers are part of their business model, said Ignazio Droghini, the company’s managing director.

For companies near College Park such as Loccioni USA, the Discovery District offers opportunities to connect with the greater community and attract young professionals.

The Discovery District, a center for business and research initiatives, is home to several businesses including IonQ and Raytheon. Most businesses are located on the east side of Route 1 near Riverdale and the College Park Metro Station.

Part of the Discovery District’s goal is to attract people and companies to College Park in an effort to make the city more vibrant year-round, explained Ken Ulman, president of Terrapin Development Company.

Businesses can’t exist in the city if it’s “dead” for three months of the year, Ulman said, but that’s changing with new businesses coming to the area.

“We’re seeing this become a place that people want to be a part of,” Ulman said. “That wasn’t always the case.”

For Droghini’s business, the choice for office space came down to the Discovery District and private incubator spaces in Washington, D.C., and Virginia that are aimed at developing startups. The choice was natural, he said.

Now, Loccioni USA is expanding its office space into an additional two suites. The move confirmed for Droghini that the Discovery District was the right choice, and validated Ulman’s vision.

“If somebody takes the risk to move to your location, and then a few years later they grow into a bigger space, it’s sort of validating,” Ulman said.

Jauvon Gilliam, the principal timpanist in the National Symphony Orchestra and owner of Capitol Percussion, an instrument rental company, wants to be part of College Park’s growing vibrant community. Capitol Percussion is currently in the process of building its space in the Discovery District, with plans to move in around mid-November.

The Discovery District’s expansive nature will allow Capitol Percussion to take advantage of the greater community and provide the space necessary to offer practice spaces for local and visiting dancers, musicians and other artists, Gillian said.

“You’ve got the energy that 20-year-olds bring,” Gilliam said. “That’s a unique thing in and of itself.”

Larry Tiffany, CEO of Medcura, also believes in the potential for the city’s growth. Medcura, a platform technology company that uses advanced materials to manage bleeding and treat wounds, moved into their space in the Discovery District in March 2020, just before the pandemic hit. The company chose the location because of its long-standing relationship with this university and the location’s comparatively lower cost.

Tiffany also noted that hiring young people from this university came with advantages.

“We get to meet people very early in their professional career,” Tiffany said. “In some respects, we get to mold them.”

Medcura also worked with Terrapin Development Company to build its facility specifically to accommodate the company’s needs, Tiffany added. The company is looking at expanding both its labs and offices into a directly adjacent space.

Tiffany has also noticed that some younger technical staff are starting to move closer to the workplace.

“Over the next couple of years, it won’t surprise me that more and more of our team does live in and around College Park,” he said.

The Terrapin Development Company is planning to build a complex next to The Hotel as a gateway to the Discovery District, which would include retail, research and office space, along with some market-rate housing for professionals.

“We’re finding that companies that have choices to be located [in] lots of places, many of them are deciding that they want to be here and want to be a part of this community,” Ulman said.