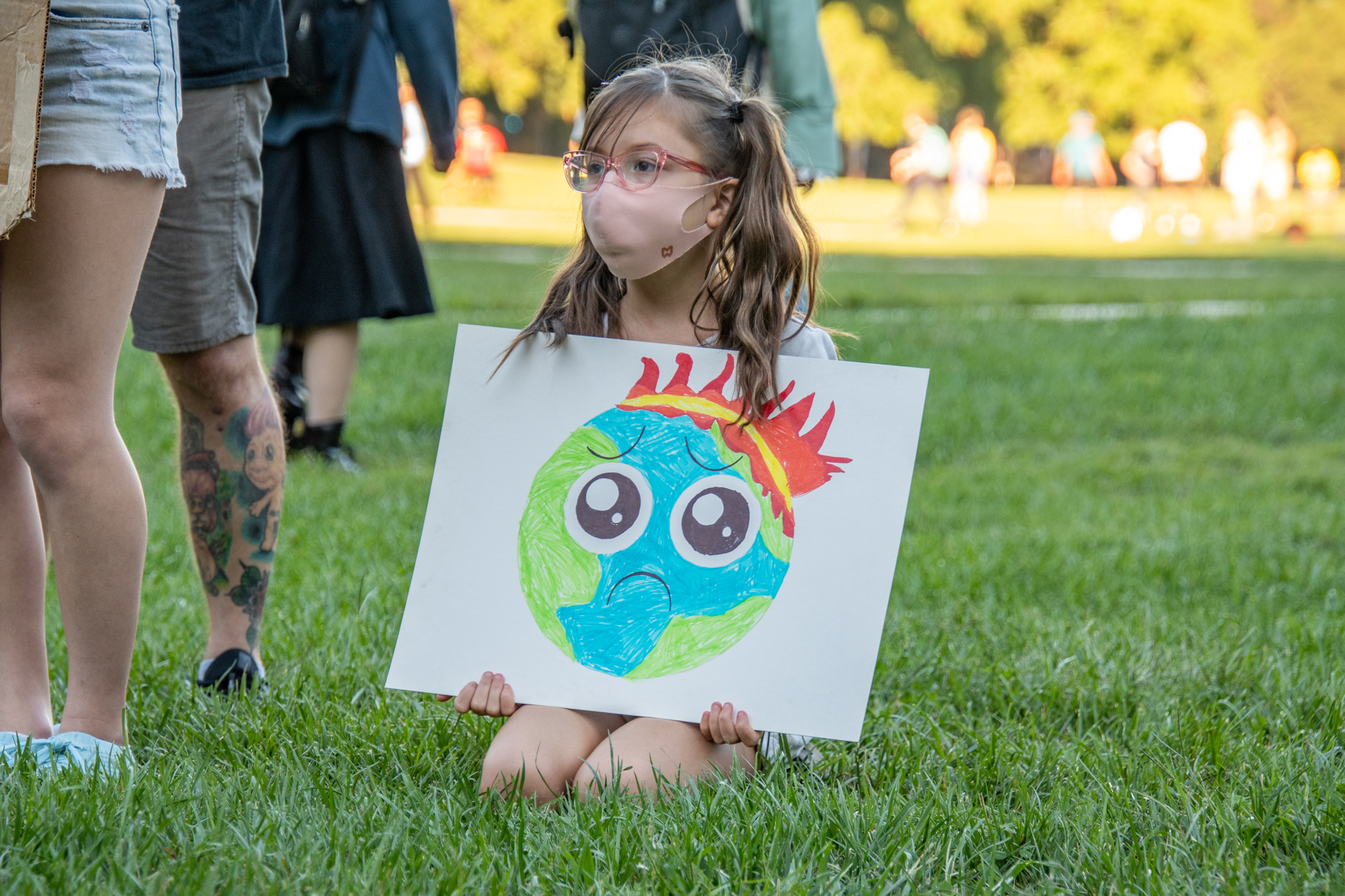 A protestor holds a sign at the climate strike at McKeldin Mall on Sept. 24, 2021. (Joe Ryan/The Diamondback)

Despite the sickness, death and panic the pandemic brought, at the very least it seemed positive for the environment. Commutes decreased, planes were grounded and the economy, in essence, was shut down. In the midst of this global shutdown, emissions decreased by 8 percent — or, to put it into context, the amount of annual decrease scientists have deemed necessary to stay on track with Paris Climate goals.

It would be difficult and impractical to keep our economy shut down for the foreseeable future, so it’s become apparent that when the pandemic lessens and people begin to reemerge into their routines, just driving less or changing some consumption behavior will not move the needle on climate.

However, focus on individual behavior change only shifts blame from large corporations to the everyday consumer. Individual consumer actions aren’t enough to make a climate difference and it’s clear that collective political and social actions are the best way to effect change.

The environmental movement has long been slowed by an emphasis on consumer-based action. Consumers linked their materialistic consumption to the degradation of the environment. In true American fashion, individuals “voting with their wallet” and shifting demand away from environmentally harmful products has been parroted as the solution to solve the climate crisis.

Even though 71 percent of global emissions have come from 100 companies and 55 percent of plastic pollution has come from 20 companies, focus on individual behavior change not only shifted blame from large corporations to average consumers, but also created a new market for “green” products. It’s clear why large corporations favored this approach. Companies have taken advantage of this new niche in the market by promoting themselves as sustainable, receiving more business and positive PR, yet not meaningfully changing their approach toward the environment.

Guilty corporations have been cynically employing these “greenwashing” methods for years. The plastics lobby funded the “Keep America Beautiful” campaign that called on consumers to recycle and stop littering, instead of taking action to actually stop pollution at its manufacturing source. More recently, BP’s carbon footprint calculator intended to help individuals reduce their emissions, implicitly blames individuals instead of the broader fossil fuel industry, which has consistently suppressed, downplayed and lied about their impacts on the climate.

Faced with the current deteriorating climate situation, political and corporate ineptitude, and the seeming helplessness of individual action, many feel a sense of climate doomism, or the loss of hope on any semblance of climate action. However, not all individual actions are weighted evenly. Political and social actions by individuals organizing into collectives have not gotten the press they deserve in the fight against climate change.

Last Friday’s rally in front of McKeldin Library exemplifies the action everyday people should be engaging in to make a real impact on stopping climate change. The speakers focused on the role large corporations have had in historic emissions, correctly placing blame on the system versus the individuals. Their rhetoric was reflected in the bill they were advocating for, which would make large polluters pay for the pollution they cause, with the money going back to frontline communities who have suffered and fossil fuel workers who would transition to new fields.

This emphasis on political action provides effective, macro-scale action that individuals can partake in to make a significant difference. They flip the script on the typical story of individual consumer responsibility, instead emphasizing systemic change and centering marginalized communities through their emphasis on direct benefits and inclusive action.

Due to the scale of the crisis, individuals acting independently in the currently constructed system will not be able to make the change needed to prevent this disastrous result. Swapping out your plastic bottles with a reusable one or using a bamboo toothbrush is not useless — but it’s not nearly enough to prevent the current crisis.

It’s time to stop falling for the corporate propaganda and greenwashing PR stunts. The tale of the “green” consumer who needs to change shopping habits to save the world has been overplayed. It’s time for us all to be green activists.