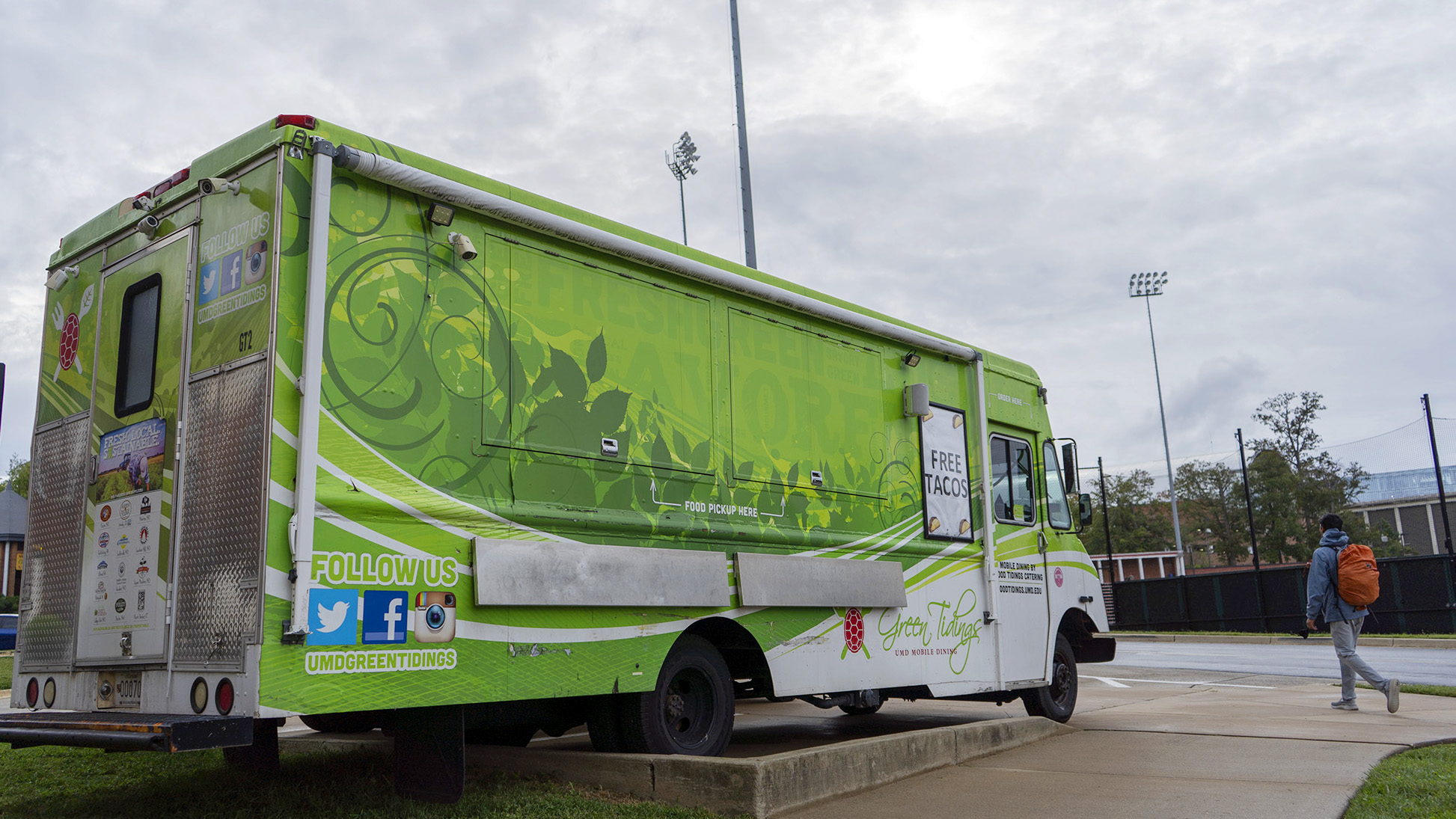 Green Tidings, the big green food truck serving meals around the University of Maryland’s campus, will not be returning this semester due in part to the ongoing labor shortage in the food service industry.

The food truck, which has been tucked away behind the Patuxent Building on Hornbake Plaza since the pandemic began, is in the midst of its longest absence from the campus. The truck opened in 2013 and had previously closed only during summers and inclement weather, dining services spokesperson Bart Hipple said.

Green Tidings is owned and operated by the university and is under the “umbrella” of Dining Services, said Green Tidings Chef Thomas Schraa.

When the truck is up and running, workers from the university’s catering kitchen man the truck, and Schraa also hires a few extra workers.

But since the pandemic, the university has used catering kitchen staff to work in quarantine and isolation spaces, Hipple said. Schraa has also struggled to find extra workers due to the labor shortage.

“I’m not even fully staffed in my regular kitchen, and so, it’s impossible to get the food truck back up and running without proper staffing levels,” Schraa said.

After restaurants laid off workers during the pandemic, the food service industry is struggling to find workers across the country. According to the Bureau of Labor Statistics, leisure and hospitality unemployment rates, which include restaurants, were 9.1 percent in August —  higher than the overall unemployment rate of 5.2 percent

Before the pandemic, the truck would operate on weekdays across the campus, including near the administration building and the farmer’s market on Tawes Plaza. Hipple estimates Green Tidings served about 400 to 550 students each week.

“The food truck has always been fun — fun for us and for you guys. A great thing to have on campus,” Schraa said.

Green Tidings was a sustainable food truck. It used recyclable and compostable food packaging, collected compost and got its ingredients from local farms. Similarly to university dining halls, Green Tidings also worked with the Food Recovery Network to donate its unused food.

Currently, there is no specific timeline for when Green Tidings will return. It’s possible the food truck could be closed during the spring semester as well.

“As soon as I possibly can, I’ll get that bad boy up and running again,” Schraa said.

Madeline Carver, a senior communication major, remembers eating at Green Tidings throughout her freshman year. If Green Tidings returns after Carver graduates, she would “100 percent” come back to eat its food again.

Her personal favorite was the sweet potato fries, and she especially liked the truck’s seasonal menus.

“It literally has the best food on this campus. Better than every dining hall,” Carver said. “Everything is so healthy and tastes so good.”

Chidera Umeozulu, a junior neuroscience major, was such a big fan of Green Tidings, she even had its loyalty point cards. As a freshman, Umeozulu lived in Anne Arundel Hall, which is near the farmer’s market. She would go to Green Tidings every week.

“Coming to college, I was used to home-cooked meals with just like, fresh ingredients.” Umeozulu said. “What I loved about Green Tidings was just how healthy it was. It was fresh and like, it was just good home-cooked meals. Like, I don’t think anything they made was ever frozen or processed.”