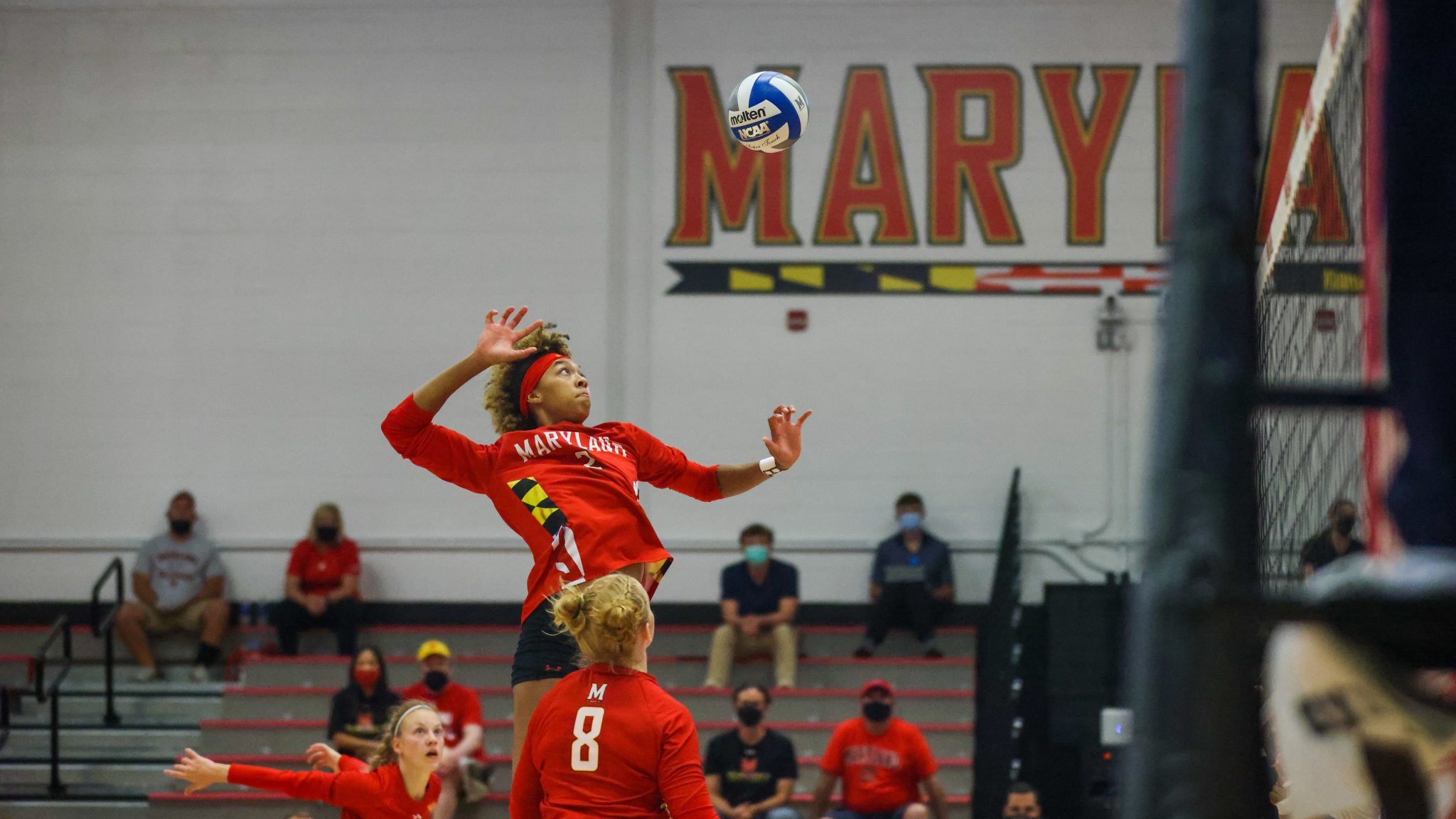 Stony Brook outside hitter Leoni Kunz leapt high above the net, as a perfectly placed set was dropped directly into her wheelhouse. Kunz cocked her arm back and unleashed, sending a high-speed spike in Maryland’s direction.

But Sydney Dowler was there to meet her at the summit.

Dowler walled the kill attempt, sending the missile straight back down for a thunderous solo block to set the Xfinity Pavilion crowd ablaze.

It was the hallmark moment of an utterly dominant defensive day for Maryland volleyball, which swept both Stony Brook and Columbia, 3-0, to move to 12-0 for the first time since 2005.

“[Defense] is definitely one of our strengths, I thought last year we were a pretty good blocking team, and I think this year we’re a much better total defense team,” coach Adam Hughes said.

Entering Saturday’s doubleheader, Hughes and the Terps were winners of 17 straight sets, holding each opponent to 18 points or less in each and every frame in that span.

And while the Seawolves tested Maryland early, it was the Terps’ defense that once again pushed them over the top in their first contest of the afternoon.

Middle blocker Rainelle Jones put on a clinic early, teaming up with Laila Ricks to bat back a Stony Brook spike attempt just a few points into the first set. Jones, who currently ranks third in the nation in blocks per set, accumulated five rejections in the opening frame to suffocate the Seawolves’ attack.

With Maryland hanging onto a four point lead later in the frame, Stony Brook middle blocker Abby Campbell attempted to claw her team back into the set with a high-flying kill attempt, only to be denied by Jones and Sam Csire at the net.

Holding the Seawolves to just a .154 hitting percentage, the Terps snagged a 25-19 first set victory, their 18th straight set win.

“I think lately [Coach Hughes] has talked a lot about consistency, raising up to our standard,” Jones said. “Making sure that we’re doing the small details on the court during games to be successful.”

And while Stony Brook would swing back in the subsequent frame, it wasn’t enough to crack Maryland’s highly-touted defense.

The Terps and Seawolves went blow for blow throughout the second set, playing hot potato with the lead deep into the frame. Stony Brook applied pressure late, converting on three straight kills to force Hughes into a timeout down 22-21.

Following the break, a service error from Campbell, followed closely by back-to-back kills from Ricks and Paula Neciporuka gifted the Terps a crucial set point to push its lead to 2-0.

And as the Seawolves’ middle blocker Enitan Omolewa’s tip-kill attempt was forced wide by two Maryland blockers, the Terps had escaped with a 25-23 second set win.

Riding the momentum of two straight set victories, the Terps coasted to a 25-12 third set domination of Stony Brook, finishing the Seawolves off with 13 total blocks to improve to 11-0 on the season.

“I feel confident leaving whatever area open,” Dowler said of her team’s block, “We’ve got just such a strong defense across the board… I think defense is one of our strengths for sure.”

The Lions, who came into Saturday evening’s contest following a 3-1 victory over Akron earlier in the morning, looked to spoil the Terps’ flawless start to close out the Maryland Challenge.

But despite a strong Columbia push to open the match, Hughes’ squad wouldn’t be deterred.

A litany of kills from the Lions gave the Terps a scare in the opening frame, as outside hitter Noelle Foster racked up six kills to give Columbia an advantage.

Maryland soon recovered, shaking off its sluggish start behind a strong service rotation from defensive specialist Lexy Finnerty to take the opening set, 25-21.

The next set was smooth sailing for the undefeated Terps.

Csire and Neciporuka produced offensively for Maryland in the second frame, each chipping in four kills to apply the pressure on the Lions. The Terps’ defense continued stifling Columbia to a .054 hitting percentage en route to a 25-18 second set victory.

With one set standing in the way of Maryland’s best start in 16 years, the Terps remained relentless to close out the match.

Spurred by a bevy of kills from multiple players, Hughes’ squad walked away with a 25-22 third set victory to close out the Maryland Challenge.

Locking arms on the baseline and singing Maryland’s renowned fight song in front of their raucous band, the Terps celebrated their first 12-0 start in over a decade.