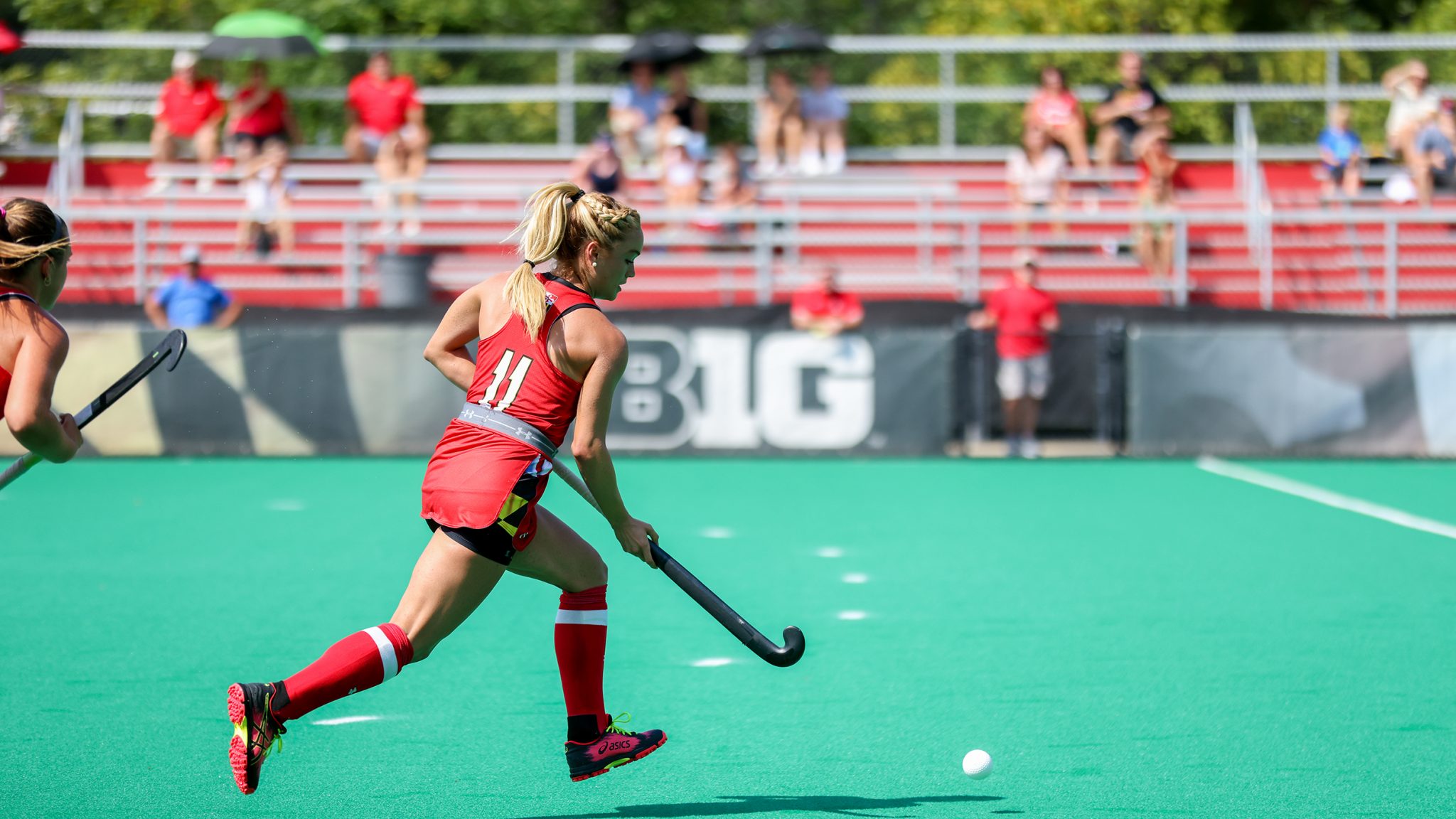 Julianna Tornetta carries the ball down the field during Maryland field hockey's game against UMass Lowell. The game was eventually rained out. (Collin Riviello/The Diamondback)

With just over two minutes left, Maryland field hockey drew a penalty corner. Down 3-2, this was one of its last chances to tie the game against a stellar Boston College squad.

The Terps always have plenty of plays up their sleeve when it comes to penalty corners. And this time, Bibi Donraadt inserted the ball to Julianna Tornetta, who whacked a shot toward the cage.

It missed. Maryland had a chance on the rebound. It came inches away from scoring — but didn’t cross the line. And with the Eagles on the right side of a five-goal onslaught over the first 20 minutes, they held off the Terps to secure a 3-2 win in the opener of the Big Ten/ACC Cup.

“We had a shot at it, and we took it,” coach Missy Meharg said. “Maryland will learn from this.”

No. 7 Boston College (3-0) is one of the best offensive teams in the nation. And it didn’t take long for the Eagles to show why.

Not even five minutes came off the clock when Boston College drew first blood. Kendall Hanlon scored her first goal of the season off an assist from Elizabeth Warner.

But No. 9 Maryland (1-1) is also one of the best offensive teams in the nation. And it didn’t take long for the Terps to answer.

Maryland drew three straight penalty corners and capitalized on the third one. Just as this unit often did in the spring, Donraadt inserted the ball to Maura Verleg, who set up Riley Donnelly to flick one past the goalkeeper — tying the match at 1-1.

Just before the first quarter ended, though, the Eagles added another. On Boston College’s second penalty corner, Sarah Johnson buried the shot.

“We kind of just broke down on the defensive end of things,” Donnelly said. “We really need to work out like high communication and make sure we’re staying really connected back there.”

The fireworks intensified in the second quarter. Early on, the Terps and Eagles traded goals within two minutes of each other.

Two of Maryland’s big acquisitions from the transfer portal shined on its score. Tornetta made a great play to get the ball near the cage, and Margot Lawn nailed a shot for her second goal in as many games. The Terps celebrated, and it was a new ballgame again at 2-2.

But not for long. Meharg praised Boston College’s Sky Caron earlier in the week. And Caron showed why.

The senior sent the ball high up in the air from the midfield. Milagros Arteta was downfield near the goal and smacked a backhanded shot past Maryland goalkeeper Noelle Frost on the first touch.

“They had some great distribution out the back through Sky,” Donnelly said. “Like a lot of long passes, which are really threatening.”

The Eagles took a 3-2 lead into the locker room, as the goals stopped coming as quickly over the end of the second quarter. Both top-10 teams continued to play good hockey — drawing penalty corners and strong goaltending from both sides.

And that was how the entire second half looked. Both sides did all their scoring in the first half, and the Terps came up a goal shy in its first loss of the season.

“These are learning, growth opportunities,” Meharg said. “A little bit more detrimental than we’d like. But we’re gonna learn from them.”