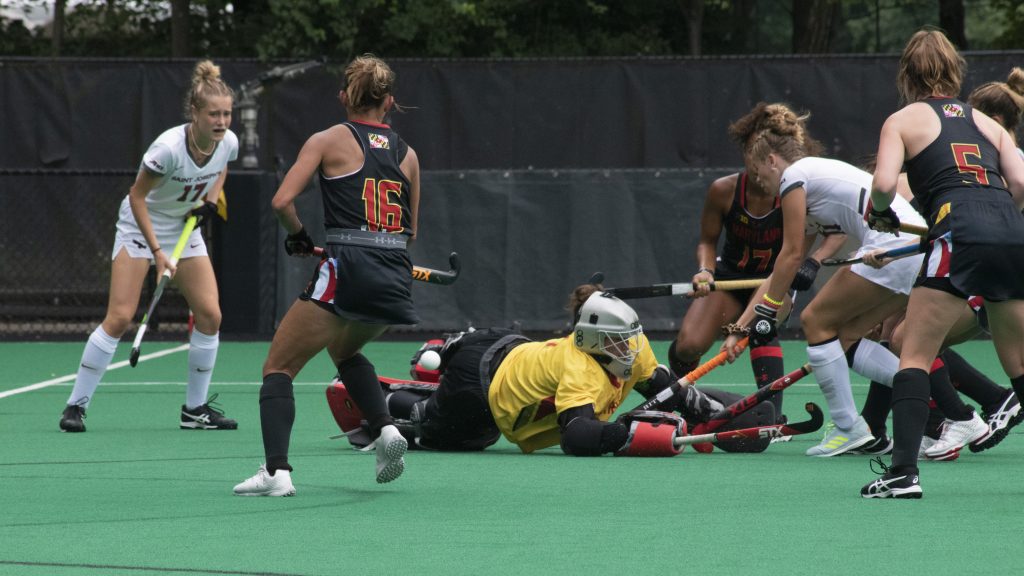 Seven years ago, the University of Maryland officially moved from the ACC to the Big Ten.

During its time in the ACC, Maryland field hockey collected eight national championships and nine conference tournament titles. Missy Meharg became head coach in 1988 and has been in that role since.

Meharg knew it wouldn’t be the last time she’d see her former ACC foes. And the Big Ten/ACC Cup has kept the rivalry going. The Big Ten’s Maryland and Northwestern will meet the ACC’s Duke and Boston College over Labor Day weekend.

“We’re excited to be able to figure out what that competition looks like,” captain Brooke DeBerdine said.

Maryland edged out No. 20 Saint Joseph’s in double overtime Sunday, when forward Bibi Donraadt showed her abilities on both sides of the ball. She dove toward the cage to knock a potential game-winning shot away from the goal line before turning in her own game-winner moments later.

While the Terps emerged victorious, the Hawks had a quick answer for every Maryland goal. For the first time since 2019, the Terps played a game in which both sides scored three or more times.

“We’ve been very, very sloppy with [our] decision in deep defense,” Meharg said. “We’ve really cleaned this up a lot, from communication to expectation to outcome.”

Boston College forward Margo Carlin is a particularly dynamic offensive player. The junior was named an NFHCA All-American in June and is already a two-time First Team All-ACC selection.

“Carlin … is a forward to reckon with,” Meharg said. “You don’t want her with the ball inside the circle or inside the dotted area.”

Carlin and the Eagles have always been a strong offensive team. They have put up three goals in each of their first two games — without a full roster.

Sky Caron was in Santiago, Chile, competing with the U.S. women’s under-22 national team in the Junior Pan American Championships with the Terps’ Emma DeBerdine, Riley Donnelly and Hope Rose.

Meharg described Caron as the field general for this Boston College squad. The senior played in the central defender role on that U.S. team, Meharg said, and has been a key part of the Eagles for the last few years.

“They’re going to have a different level than they did last weekend,” Meharg said.

The Big Ten/ACC Cup was not played last spring, so this weekend will be its first installment since 2019. But Terps’ goalkeeper Noelle Frost, who is in her sixth season with the program, already knows this tournament and these teams very well.

“They all have very great hands in the circle,” Frost said about Boston College.