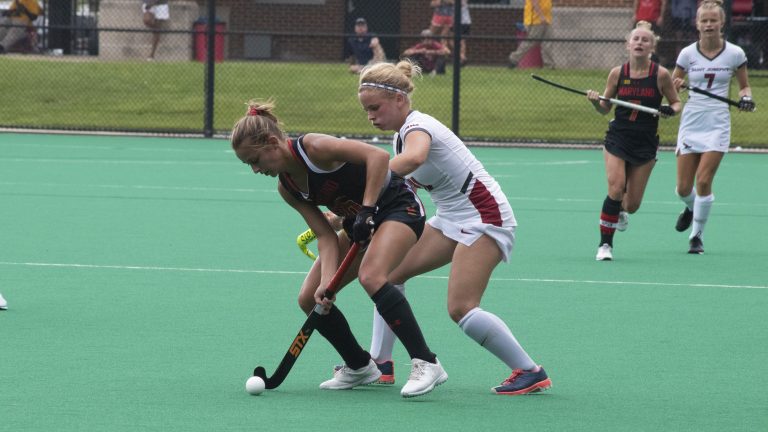 Less than two minutes remained in the first overtime when Saint Joseph’s Anna Miller thought she may have ended a back-and-forth match with Maryland field hockey. She took a shot that was kicked by goalkeeper Noelle Frost and ricocheted toward the back of the net. The Hawks’ players sprinted onto the pitch in cheers.

But Bibi Donraadt was there. The Terps’ senior flew in, dove to the ground and swiped the ball away inches before it crossed the line.

Another 10 minutes went up on the clock. And Donraadt delivered again. She dribbled the ball past several defenders and flipped a shot up in the air.

And just as the Saint Joseph’s sideline did moments prior, the Terps ran out onto the field in celebration. But this time, they didn’t have to run off right after.

The No. 9 Terps edged out No. 20 Saint Joseph’s, 4-3, in their first complete match of the season in a dramatic double overtime victory.

“I’ve never done anything like that,” Donraadt, typically a forward or midfielder, said.

Her heroics caught the attention of her mother, a longtime goalkeeper and one of Donraadt’s practice partners.

“She’s like, ‘I never thought this would happen to you in your career,’” Donraadt said.

Early in the first quarter, the Hawks (1-1) collected a steal on the defensive side before the attack snuck toward the cage and pressured Frost. Celeste Smits got off a shot, which Frost kicked away.

With the players standing on the Hawks’ sideline cheering loudly, Saint Joseph’s drew three penalty corners in the first three minutes — none of which elicited successful shots.

Later in the first quarter, Emma DeBerdine made an adept move right in front of the cage, finding some open space as Kyler Greenwalt tried to tap in a loose ball. St. Joseph’s goalkeeper Robin Bleekemolen fell to the pitch and dove, swatting the ball away.

DeBerdine was stationed in front of the net, watching Bleekemolen closely. She smacked the loose ball into the back of the cage and got the Terps (1-0) on the board.

While DeBerdine’s goal gave the Terps an early upperhand, St. Joseph’s quickly struck back. Once the Hawks drew their fifth penalty corner of the first quarter, they found the equalizer — knotting the match at one.

While the Hawks were certainly winning the penalty corner battle, Maryland kept making the most of each offensive trip, pressuring its opponent with promising shots.

And once it drew its first penalty corner, Maryland found itself back on top. Taylor Mason smacked in the ensuing shot, pushing the Terps ahead, 2-1.

But St. Joseph’s wasn’t done with its fierce attack. After Frost knocked away a penalty corner shot, Cassidy Atchison was standing in a perfect position to jam home the rebound.

“I would be shocked if they didn’t sweep that A-10 with no problem,” coach Missy Meharg said.

The match was knotted at two for a while, until Margot Lawn made her presence as a Terp known in her first match.

After receiving a pass from Donraadt toward the right of the cage, Lawn looked straight at Bleekemolen in net. She rocketed a shot past her to give Maryland a 3-2 lead.

“It’s just very exciting to see how much forward movement we have now, with Hope [Rose], Margot [Lawn] and Julianna [Tornetta],” DeBerdine said. “We just have a ton of energy coming in from those three girls, as well as the rest of the team.”

Lawn’s goal gave Maryland plenty of confidence, but St. Joseph’s didn’t back down. The Hawks’ Celeste Smits netted a goal to tie the match at three.

Throughout an intense fourth quarter, which featured several video reviews that paused the match, both sides had chances to score. But they didn’t.

And for the first time since Oct. 3, 2019, against Northwestern, Maryland played beyond 60 minutes.

Within the first three minutes of overtime, Smits fired a shot that missed just wide. The Terps quickly moved coast to coast and drew the first corner of the fifth period, and the shot missed.

The teams continued to trade offensive bursts as both sidelines exchanged loud, fiery cheers. When Donraadt’s shot got past Bleekemolen, one side was finally able to celebrate.

“Seeing the team running at you is just such a fun feeling,” Donraadt said. “It really gives you that feeling that we’re there for each other and are having just so much fun.”

No. 9 Maryland field hockey beats No. 17 Princeton in overtime, 4-3

‘This is my team now’: Maryland field hockey’s Julianna Tornetta to play her former team

No. 7 Maryland field hockey falls to No. 8 Penn State in overtime, 3-2