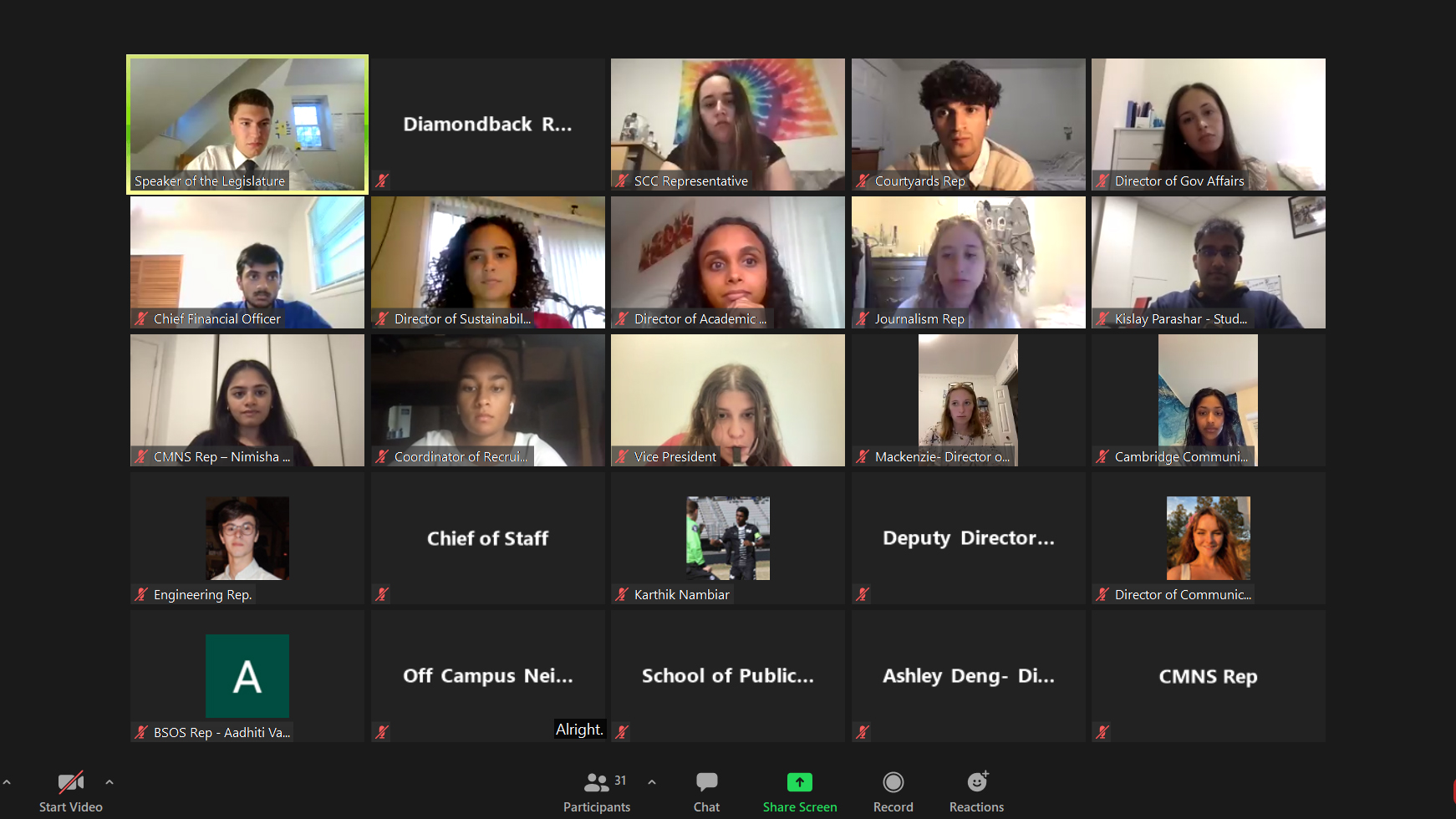 The SGA held their first meeting of the year virtually due to severe weather on Sep. 1, 2021. (Ryan White/For The Diamondback)

As the weakened remnant of Hurricane Ida barred down on College Park Wednesday with persistent rains and gusts of wind, the SGA’s hopes of an in-person reunion were soaked.

What was supposed to be not only their first general body meeting of the semester, but the first in-person meeting since the online transition, became yet another Zoom meeting. But after more than a year of practice in the virtual realm, business went on as usual with a single emergency agenda item proposed and voted on.

The lone act, which passed with a vote of 14-0-2, inks the University of Maryland Student Government Association’s new contract with TurboVote.

TurboVote is a product of Democracy Works, a nonpartisan nonprofit claiming to have helped over 10 million voters, and has partnered with over 300 higher education institutions, other nonprofits and companies since 2012, according to its website. The act passed ahead of a series of elections, including the 2022 midterms and the 2024 presidential election.

[As first SGA meeting of the year nears, here’s what to expect from the body this fall]

The 4-year contract with the company, which promotes voter accessibility, is worth about $6,000, which will be withdrawn from the legislative reserves.

Designed as an assistance tool, TurboVote is an online application that helps users register to vote, covers absentee ballot rules and sends reminders about election day in all 50 states and Washington, D.C., for all levels of government — local, state and federal.

SGA has been using TurboVote for years and was paying about $3,000 a year for the service. With the new 4-year contract, the governing body stands to save money — roughly $6,000 in savings compared to what they paid for in their yearly contract.

“We plan to keep using TurboVote and so why not save us some money while doing so,” said Steven Berit, a sophomore computer science and government and politics major. The Courtyards representative sponsored the act.

In early November, the city of College Park will be holding its municipal elections for mayor and all eight council member seats.

“We’ve seen the success TurboVote has had,” Berit said. “We’re nearing 75 percent of students on campus registered to vote and we’re trying to get that push to get there.”

Students can register for TurboVote through a step-by-step process on its website.

In past years, the SGA’s TerpsVote coalition ambassadors would campaign on campus and help students sign up on the spot, and according to Berit, that will resume this year. The SGA will also reach students through online methods such as Listservs.

In addition to the act, two appointments were confirmed as well, including Mackenzie Miller, a senior public policy major, as the new director of student affairs.

“My hope is that as director of student affairs that I’ll be able to improve equity and accessibility on campus as well as improve the safety on campus, especially for students of marginalized groups,” Miller said during the meeting.

The SGA’s next body meeting will be Sept. 8.