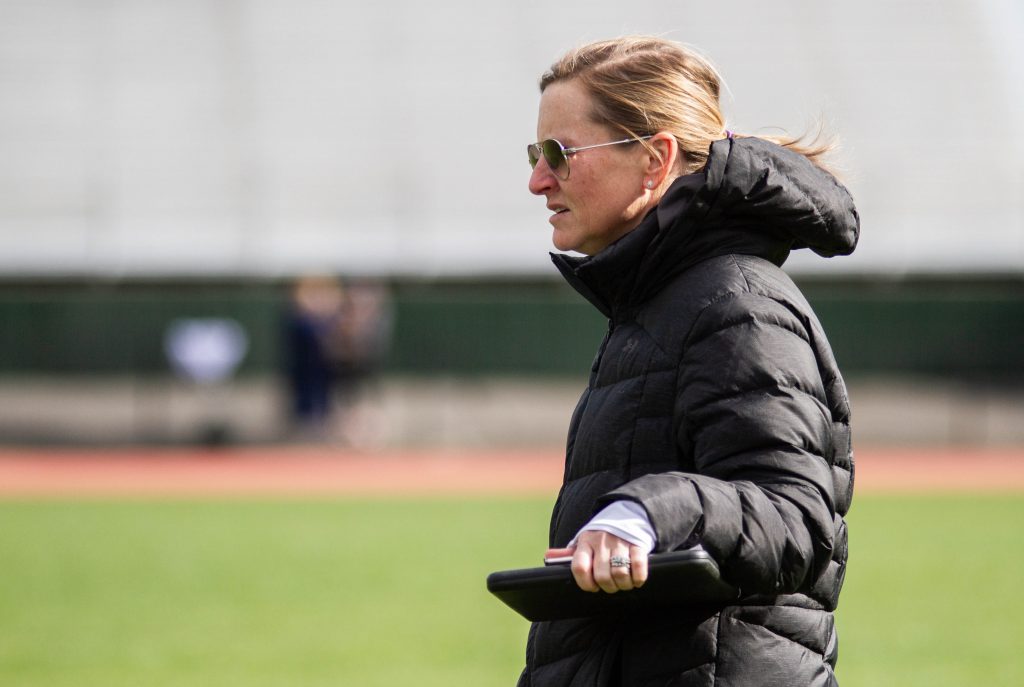 After an early exit in the 2021 NCAA tournament, Maryland women’s lacrosse has wasted little time in retooling its lineup with the addition of five impact transfers, bringing much-needed depth from the previous season.

Among the new players who will be introduced to coach Cathy Reese’s squad are attacker Aurora Cordingley, defenders Abby Bosco and Clancy Rheude and midfielders Shannon Smith and Natalie Pansini.

“We’re really just expecting a lot from them,” Reese said. “And I know that they’re going to bring a whole other dimension to our team.”

Cordingley is a familiar face to the Terps, coming to College Park as a graduate transfer from Johns Hopkins. In six career matchups with Maryland, the attacker has accumulated 14 goals.

Despite a 15-game schedule in 2021, Cordingley had a strong season for the Blue Jays, notching 39 goals and 18 assists, earning a spot on the IWLCA All-American Third Team alongside the Terps’ Hannah Leubecker and Grace Griffin.

Hailing from Oakville, Ontario, Cordingley offers another experienced hand up front. A new attacker that can offer veteran leadership will be key for the Terps as they look to replace Brindi Griffin, Catie May and Hannah Warther, who graduated and accounted for 35 percent of the team’s offensive output this season.

“She seems like such a dynamic player,” Grace Griffin said. “Playing defense against her, I have so much respect for her.”

Although she’s only played six games in the past two years, Bosco could be an instant game-changer for Maryland’s defense. The graduate transfer comes to play after becoming an All-Ivy League midfielder at Penn in 2019.

Before the 2020 season was cut short, the Suffern, New York, native had 13 ground balls, 12 caused turnovers and 12 draw controls, setting herself up to dominate the Ivy League in her junior year.

She was a midfielder her first three seasons, but for the sole game Penn played her senior year, she anchored the backline, grabbing four ground balls, causing two turnovers and picking up six draw controls.

And even with all of her talent on the defensive end of the field, she possesses strong attacking ability, scoring 18 goals in her career.

Rheude comes to the Terps from Albany after having arguably the best 2021 season of any of the transfers. Hailing from Canandaigua, New York, Rheude lit the America East aflame in her sophomore season, being named the conference’s Co-Defensive Player of the Year, making the All-Conference First Team and earning a spot on the IWLCA All-Northeast Second Team.

She ranked second in the America East in ground balls, third in draw controls and fourth in caused turnovers.

With reigning IWLCA National Defender of the Year Lizzie Colson graduating, the Maryland defense was going to need a boost, and Bosco and Rheude are strong additions to the unit.

“The level of experience that some of the seniors and more experienced players can bring will definitely help with us and some of the younger players that we have,” Leubecker said.

For Smith, coming to play under Reese will be a homecoming for the Phoenix, Maryland, native. Inside Lacrosse’s No. 13-ranked freshman entering 2021, Smith didn’t get much playing time at North Carolina, seeing game minutes in just eight games. She amassed three goals, four ground balls and one caused turnover.

Much like Smith, Pansini has little collegiate experience but exciting potential. In her freshman year with Princeton, she didn’t take the field in any of the Tigers’ five games.

However, she was a two-time U.S. Lacrosse All-American in high school, a four-time Under Armour Underclass All-American and the No. 17-ranked Class of 2020 recruit by Inside Lacrosse. Those accolades came from her time at The Agnes Irwin School, where she was a teammate of Maryland defender Kacy Hogarth.

As up-and-coming midfielders, Smith and Pansini will be able to learn under one of the best two-way players in collegiate lacrosse, Grace Griffin.

Along with their five transfers, the Terps will welcome nine freshmen to the team, featuring a league-high six Under Armour All-Americans.

There are plenty of new pieces to Reese’s squad for the 2022 season. Putting it altogether will be tantamount to getting Maryland back to the final four and national championship game that eluded it last season.

“Everybody brings something different, something unique and something special to where we are,” Reese said.