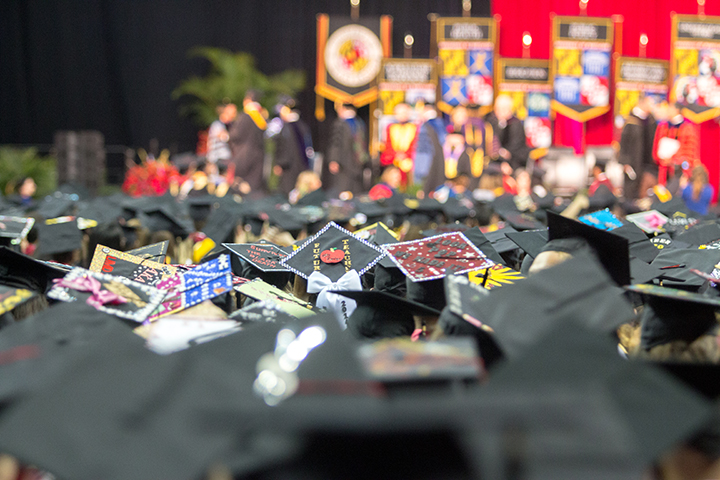 Days before commencement ceremonies begin, some University of Maryland students set to graduate are scrambling to secure their caps and gowns.

The university is partnering with Oak Hall Cap & Gown — a family-owned, Virginia-based company that makes caps and gowns from recycled plastic bottles — to provide graduation regalia this spring. Even though students placed orders before the May 1 deadline, many have not received caps, gowns, stoles and other regalia.

According to an email from Deddison Won, the university bookstore representative operations manager, all Oak Hall orders were sent out from Thursday to Saturday and will arrive by graduation on Friday.

Some students have received their orders, although there does not seem to be “any rhyme or reason” as to why, said Matthew Mills, who will be graduating with a degree in computer science this week.

But some students who still haven’t received regalia are frustrated.

Mills said he and his roommates have not received their red University of Maryland stoles. They’re turning to a do-it-yourself project instead.

“My roommates and I… ordered generic red stoles from Amazon,” Mills said. “We’re planning on getting patches from the UMD bookstore to sew on, or iron on, so that we have something that looks somewhat like the original.”

Other students have attempted to create community-based solutions, organizing a regalia exchange so students who don’t receive their Oak Hall order in time can find a cap, gown and stole to wear to commencement.

Gio Steckel, who is graduating with a master’s in finance this week, received an email from the master’s program office at the business school in April.

Steckel ordered regalia for his undergraduate commencement last year and it was slightly delayed. This year, he ordered early as a precaution, he said. He still has not received his regalia.

“I feel defrauded,” Steckel said. “It just feels like such a simple thing, and for some reason it’s complicated for them.”

Issues with Oak Hall seem to stretch beyond this university. In the company’s Twitter replies, individuals from various colleges are voicing complaints about late delivery dates, a lack of information about where their regalia is and similar issues.

On Better Business Bureau, Oak Hall has a user rating of one out of five stars, with over 40 reviews about delayed shipping and a lack of communication from the company. One of the reviews is from before the pandemic.

Oak Hall is not currently responding to calls. Instead, students who try to contact the company to check on their orders hear an automated message about the company’s “extreme volume of orders.” In the message, Oak Hall says it is “fulfilling all orders and meeting all graduation dates.” Oak Hall did not respond to multiple requests for comment from The Diamondback.

Some feel that messages like these aren’t enough, pointing to a lack of transparency from the company throughout the ordering process.

“It’s ridiculous because I haven’t even received… order confirmation or anything like that. I don’t have a receipt or an invoice or anything,” said Joey Whiting, a psychology major graduating this week.

Whiting got a message from UPS that his regalia would arrive Thursday evening, but he went to the bookstore to purchase a back-up cap and gown because he was doubtful that the Oak Hall order would arrive, he said.

Numbi Lutebula, a geographical sciences major, is waiting for her stole from Oak Hall to arrive. If it doesn’t come by Friday, she’s considering skipping graduation, she said.

“I don’t want to be that one person that is missing [an] item,” Lutebula said. “This should have just not happened in the first place.”

Other students who don’t receive their regalia plan on attending commencement without it, Mills said.

“This is literally what their business does and this is what they’re paid to do, and it shouldn’t be… something that seniors need to stress about,” Whiting said.