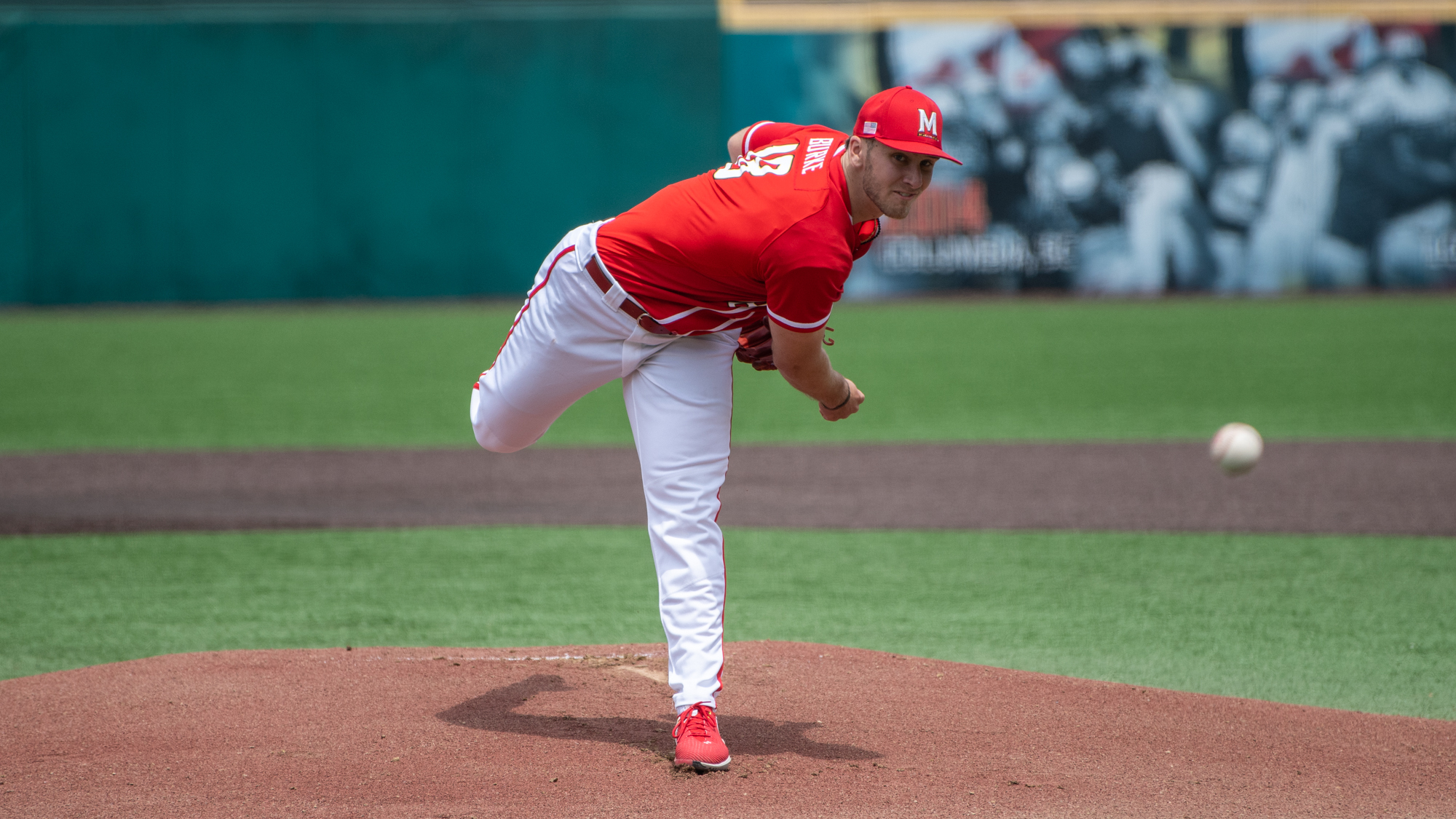 Sean Burke fires a pitch during Maryland baseball's 7-2 win over Purdue on May 16, 2021. (Joe Ryan/The Diamondback)

As Sean Burke departed the mound, the cheers rose around him. Coming off two shortened appearances, Maryland baseball’s ace had returned to form, and the crowd saluted his efforts.

Burke confounded Purdue’s bats for six-plus innings in a bounceback start for the redshirt sophomore. He was backed up by an offense that started fast and cruised the rest of the afternoon.

It culminated in a 7-2 win for the Terps on Sunday, sealing a sweep of the Boilermakers.

Maryland picked up its fifth straight win and 14th victory in its last 16 games. The Terps continued their surge toward the top of Big Ten standings with two series remaining. Much of that was thanks to Burke’s sterling command.

“Burke had a super efficient start for us,” coach Rob Vaughn said. “[He] was as efficient with his pitch count as he’s been all year.”

Still, the Maryland right-hander found himself in an early jam.

Burke faced two Purdue runners in scoring position with one out in the first inning. Ben Nisle strolled to the plate and took a 1-0 pitch to shortstop Ben Cowles. He was too deep in the hole, and the afternoon’s first run crossed the plate.

It was an ominous sign for Burke, who had pitched just 5.2 innings since April 23. After tossing 117 pitches in that start against Iowa, Vaughn had limited Burke in order to rest his arm. While he had managed to only allow one run across those frames, his strikeout-to-walk ratio plummeted.

[Maryland baseball stays hot, pulls away from Purdue for 6-1 win]

But those early struggles quickly faded. After that first-inning single, the redshirt sophomore did not allow another hit until the sixth. He attacked the Boilermakers’ hitters with his low-to-mid 90s fastball, forcing weak contact as he peppered the strike zone.

Though Burke, who entered Sunday leading the Terps with 75 strikeouts, did not punch out a batter until the fourth, he was able to limit the free bases that plagued his last two appearances. Burke walked just two batters and hit another, stranding one of those runners and picking off the other in the third. At one point, he retired eight in a row.

“[My] arm felt much better this week, and I felt much more comfortable on the mound,” Burke said. “I think that confidence just from feeling that and experiencing that first inning allowed me to settle in throughout the game.”

Purdue found minimal momentum again in the sixth with a leadoff single. Burke worked two quick outs, but Nisle struck again. He connected on a full count offering, narrowly missing a home run as he clubbed an RBI double.

But Burke recovered and forced Zac Fascia to fly out to left, ending the threat and keeping Maryland ahead. Burke’s strong outing — two runs (one earned) and four strikeouts in six-plus innings on 88 pitches — allowed a scorching Terps offense to stay hot.

Matt Shaw powered the depleted lineup, falling a triple short of the cycle. He opened his day with a solo home run to immediately answer the Boilermakers’ first-inning run. The freshman then doubled in the second and singled in the sixth, the latter knock leading to a run.

That first-inning blast sparked an offensive onslaught against Purdue right-hander Cory Brooks. Maryland sent 10 batters to the plate in the frame, with Tommy Gardiner tripling in two and Luke Shliger singling in another to open a 4-1 lead.

That edge expanded in the fifth. With the inning’s first two batters reaching base, Troy Schreffler roped a two-run double down the left field line to send the Terps up five.

“We have a really good approach,” Gardiner said. “We’re getting a lot of leadoff guys on … and then what it really boils down to is we’re executing really well.”

But the Terps’ pitchers stayed strong even as Burke departed after allowing a leadoff single in the seventh.

Elliot Zoellner relieved the ace and sat down six straight batters, including four strikeouts. He then worked around a ninth-inning single to close out the series and cap an impressive display on the mound that Maryland hopes to carry forward into its final six games.

“This was, I thought, our best weekend of baseball the entire year,” Vaughn said.