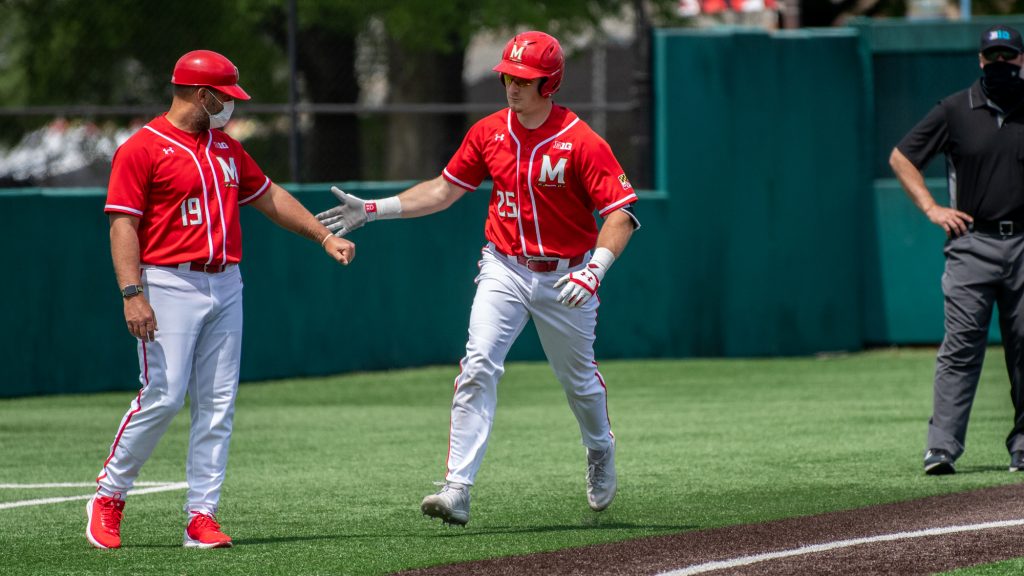 Justin Vought celebrates with a teammate during Maryland baseball's 6-3 win over Minnesota on May 2, 2021. (Joe Ryan/The Diamondback)

Behind a combined seven RBIs from Justin Vought and Matt Shaw, the Terps rolled over Purdue in their series opener, 11-0.

Playing without marquee bats Max Costes and Randy Bednar, Maryland needed a spark from its lineup to take down the Boilermakers.

A grand slam is usually a pretty good way to spark an offense. In his opening at-bat, Vought did exactly that.

“The grand slam was huge, but what led to the grand slam I think is the biggest piece of that,” coach Rob Vaughn said. “[Bobby Zmarzlak] floats a ball but gets the ball in play … Tommy Gardiner gets into a two strike count and takes some really tough pitches.”

With his fourth home run in his last two games, Vought helped the Terps to a five-run lead in the first. Behind strong pitching from starter Nick Dean, Maryland faced little opposition from a stagnant Boilermaker lineup that couldn’t scratch across a run on Dean.

“This is the first time … where I feel like that was a legit complete game,” Vaughn said.

Buoyed from a strong offensive start, Vaughn’s squad danced to a steady beat of runs, like Ben Cowles’ RBI single in the second and RBI base hits from Shaw and Gardiner in the fourth.

If Maryland missed Costes and Bednar, the strength of their bats certainly didn’t indicate it. A two-RBI double from Shaw gave him three RBIs on the day, and it put the Terps on the brink of a double-digit lead.

As darkness closed in on Bob “Turtle” Smith Stadium, the Terps kept circling the bases. An RBI single by Gardiner in the sixth and a booming homer from Cowles in the next frame put the game way out of reach for the Boilermakers.

While Maryland kept thriving on offense, Dean was relieved by Sean Fisher in the seventh, capping off an outing of six hits in six innings for Dean. Fisher continued the shutout performance from the sophomore for the next two innings.

“When [Dean] has four [pitches] he’s going to be pretty dominant,” Vaughn said. “You can throw four pitches in any count and he can command all four.”

Three strikeouts by Fisher in the seventh and eighth moved the Terps closer to the shutout, and all they needed was a solid ninth to seal it. Zach Thompson took the mound in the ninth, and the shutout aspiration came to fruition.

“That’s what winning baseball looks like,” Vaughn said. “They did a phenomenal job taking care of business tonight.”