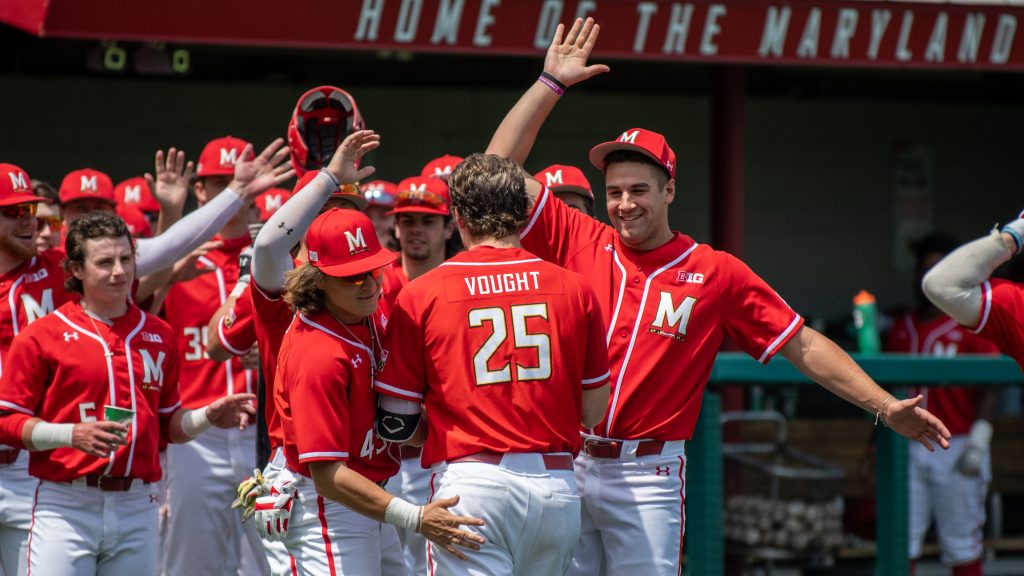 Justin Vought celebrates with his teammates during Maryland baseball's 6-3 win over Minnesota on May 2, 2021. (Joe Ryan/The Diamondback)

Justin Vought hasn’t had the senior year he hoped he would.

Vought had only five hits the entire season, good for a .132 batting average, before he got the start in game two of a doubleheader at Illinois Saturday.

“I’ve been struggling this year a lot,” Vought said. “Feel like I’m letting the team down when I’m struggling at the plate.”

It took one day to turn things around.

His three-homer outing against the Fighting Illini tied a school record, and afterward, Vought was over the moon with his performance. Not only did he have his best career performance at the plate, he helped clinch a crucial series win for Maryland.

With the season past the three-quarter mark and the Terps hot on the heels of Big Ten leader Indiana, every game counts. This one was no different.

After its series win, Maryland is now tied with Iowa for fourth place in the conference and remains in the race for the top spot.

Had the Terps lost another game over the weekend, they would have been 3.5 games back with nine to go. Their margin of error is small already, but falling that far back would’ve made the task of catching Indiana much steeper.

With help from Vought and Chris Alleyne, who put up three RBIs in the first game of Saturday’s doubleheader, coach Rob Vaughn’s squad remains firmly in the hunt.

Vaughn challenged his squad to do better after they put up a blank in the first game of the series, and they responded.

Lately, they always have.

Previous examples include sweeping Ohio State after dropping a series to Nebraska and conquering Iowa after starting 0-3 against the Hawkeyes.

If it wasn’t for the Terps’ ability to bounce back, they might have carried their poor hitting performance from Friday into the doubleheader Saturday. Illinois pitcher Andrew Hoffmann stunned the Terps at the plate, allowing zero earned runs and earning the shut out.

“Ran into a buzz saw with Hoffmann, but we responded really well,” Vaughn said.

The last time Vaughn’s squad was shut out was in the season-opener against Michigan State, which started a three-game losing streak. Since then, Maryland has only lost consecutive games twice.

The series clincher Saturday also proved that the Terps have no problem winning away from home. And with an away series at Michigan following Purdue, they’ll have another chance to show what they can do on the road.

If they win now, they’ll compete in June. Lose, and they’ll find themselves narrowly missing out. Vought saved the team this time, but who knows who will step up next.