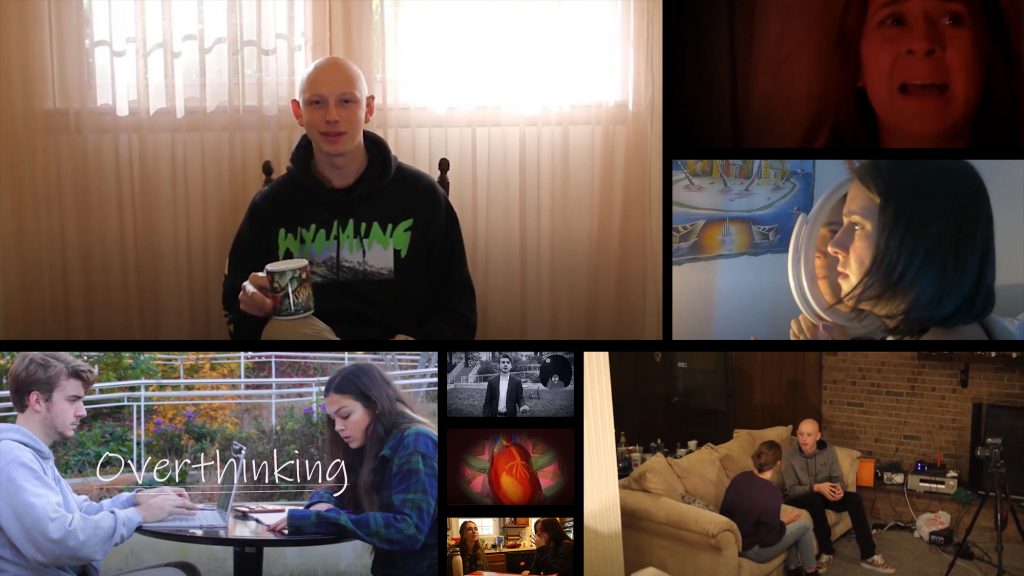 "The Auteur", "Overthinking" and "The Sound Behind" are premiering at the film festival Friday. (Screenshots via YouTube)

Making a student film is a game of problem-solving. How do you bring a dream to life with a tiny budget and limited equipment, all while balancing school? You need to schedule shoots, coach actors and compose music, just to name a few tasks. Each one has its own problems, too, creating a maze of decisions and compromises going into your final cut. Throw a pandemic in the mix, and you see the struggle of student filmmakers today.

Each semester, members of the Maryland Filmmakers Club produce short films made entirely by students. Since returning to the campus, directors have resumed filming projects, but only under pandemic guidelines. Actors and cast members must be tested, everyone must stay six feet apart and crowded spaces can’t be used.

“When it’s so stripped down and you don’t have as many hands on set, you’re sort of limited in what you’re able to do, which are already limited because, you know, we’re student filmmakers,” said Stone Heyman, the club’s president. “We don’t have a high budget and our equipment isn’t always the best, so we were always finding solutions.”

Heyman’s film, The Auteur, needed few adjustments. The movie is a mockumentary of an eccentric director, so sets and crowded areas weren’t needed, but smaller aspects of the shoot still needed attention.

“I don’t want to be worried about: Is my PA standing too close to my cinematographer or has my actor been tested,” the junior information systems and operation management major said. “That’s another aspect that goes into the process that we hadn’t had to deal with before.”

For others, however, the restrictions completely changed the structure of their films. Robert Wolle, the club’s vice president, had to change his film’s entire course to accommodate guidelines. Wolle’s film last semester, The Sound Behind, initially included his lead in a crowded classroom, interacting with other students. To mitigate risk, Wolle cut down his cast to just one person in-person.

“I knew it was going to be unfeasible to have a lot of people all comfortable with filming in person,” the junior physics major said. “It will also be very unsafe, so I decided that I wanted to cut down the number of people.”

Wolle also changed the set to require only one room: the lead’s dorm. The plot also changed to include Zoom calls and other pandemic normalities rather than face-to-face interaction.

“I think for me, I’ve been more pushed to tell smaller stories,” the senior mechanical engineering major said. “I’ve been trying to keep my scripts down so it only has two main characters.”

Although cutting down a film’s scale may compromise a director’s vision, it also pushes them to think creatively to use limited resources. For example, in Overthinking, Zimmerman included a drawn animation sequence in the middle — a decision that added to the film’s personality without requiring more cast members.

The pandemic also impacted the club as a whole — new membership has been much smaller than in previous years, and with restrictions stopping in-person events, the club’s board has had to think of new ways to involve members.

“Instead of having some of those meetings that we did in the past, it’s changed to bring in more guest speakers to talk about their experience to the industry,” Zimmerman said. “We have editors come in and do editing tutorials, we had some people come in and give a talk on how to film on a budget or in the pandemic.”

Participation decreased as members were reluctant to participate in in-person events. Typical productions require a large number of production assistants, but this semester was different.

“I would definitely say that there was less people that were willing or interested in helping in the process from a production standpoint,” Heyman said.

With the pandemic improving, the club is hopeful they’ll see more interest and get new members to join.

“I hope that once we get out of COVID, then there’s going to be even more fervor for people to actually get together and make these films,” Heyman said.

If you want to catch what the student filmmakers have been working on this semester, you can tune into their semester film festival on May 7 at 7 p.m.