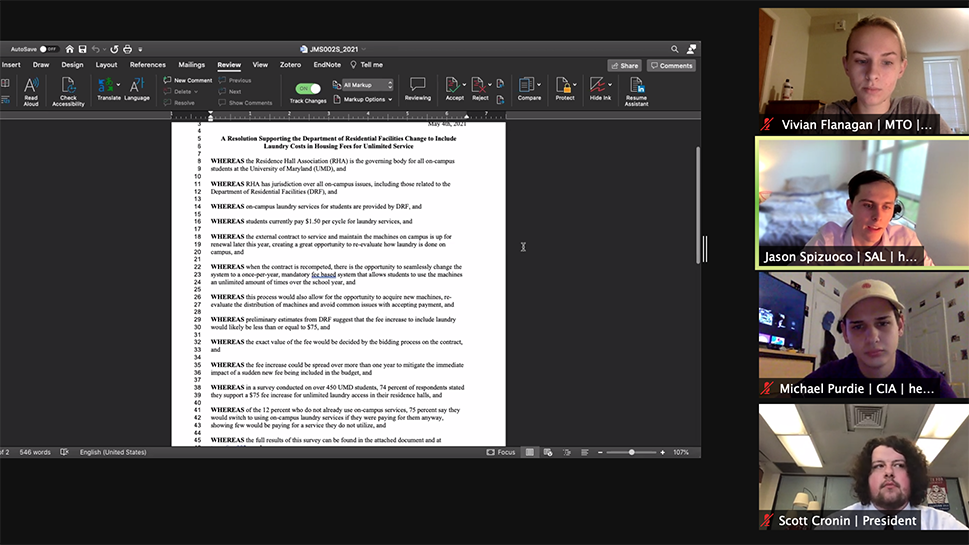 The RHA met virtually on May 4, 2021. (Christine Zhu/For The Diamondback)

The University of Maryland RHA Senate unanimously passed a resolution Tuesday urging the department of residential facilities to include laundry costs in housing fees for unlimited service.

The resolution comes as the external contract to service and maintain the machines on campus is up for renewal later this year. When the contract is revisited, there is the opportunity to change the system to a once-per-year, mandatory fee-based system, according to the resolution.

Under a changed policy, students wouldn’t have to worry about getting charged after glitches in the machine’s payment system or unknowingly paying to use faulty machines. Additionally, students on scholarships wouldn’t need to pay for laundry out-of-pocket.

Currently, the department of residential facilities provides on-campus laundry services for students at $1.50 for each washer or dryer cycle. The resolution, authored by senator-at-large Jason Spizuoco, defines one load as one run of the washer and one run of the dryer, amounting to $3.

Preliminary estimates from the department of residential facilities suggest the fee increase to include laundry would likely be less than or equal to $75, according to the resolution. The exact value of the fee would be decided by the bidding process on the contract.

Spizuoco, a junior aerospace engineering major, calculated that on average, students living in residence halls spend $96 per academic year on laundry — that’s $3 per weekly load across a 32-week academic year.

“You probably might not do some right at the very beginning or at the very end, but still, that’s like $20 over the $75 estimate, so it wouldn’t be more, for sure, if you’re doing one wash a week,” he said.

Spizuoco conducted a survey of the laundry habits of over 500 students. About 88 percent of respondents say they do their laundry in machines provided by campus housing, about 11 percent say they take their laundry home and about one percent find off-campus solutions, such as laundromats or a friend’s house.

The Residence Hall Association encourages the department of residential facilities to enact this fee gradually over multiple fee cycles.

Kylee Robertson, a senator and sophomore psychology major, asked for a prediction of how many fee cycles it would take to implement the increase.

Spizuoco estimated the fee would be enacted over two to four years. In discussions within RHA’s resident life advisory team and resident facilities advisory board, as well as with residential facilities director Andrea Crabb, students spoke of increasing the fee in three $25 increments if the total was $75.

Freshman electrical engineering major Scott Fleischmann, a senator and chair of the dining services advisory board, asked how laundry payment would work in the period between pay-per-cycle laundry and the full mandatory fee enactment.

Spizuoco clarified laundry services would switch immediately to unlimited access upon implementing the first increment of the mandatory fee — which would be for the 2022-23 academic year at the earliest, since fees for the 2021-22 academic year have already been approved.

“[The department of residential facilities] would probably lose some money on the laundry, but they felt it was better to not just dump the $75 fee all at once,” he added. “You would see a raise of $25 but immediately get all the access.”

The fee would allow for the most “financially insecure” students to avoid separate payment for laundry as it would become covered under scholarships, according to the resolution.

“Right now, if you get a full-ride scholarship … or financial aid to pay for your room and board, you still have to pay for laundry … out of your own pocket,” Spizuoco said. “But if this is included in the room and board cost, scholarships would then cover that so that’s maybe $70 to $100 per year that the most financially insecure students would not be paying out of their pocket.”

CORRECTION: Due to an editing error, a previous version of this story misstated that there were 450 respondents to Jascon Spizuoco’s survey on laundry habits. There were over 500 respondents. This story has been updated.