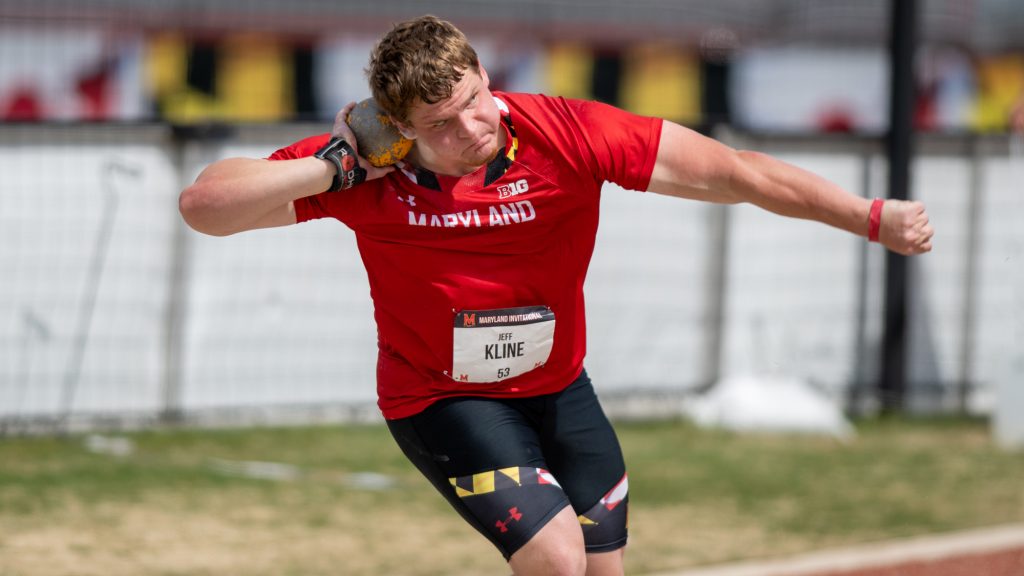 Jeff Kline winds up for the shot put during the Maryland Invitational for Maryland track and field on March 27, 2021. (Joe Ryan/The Diamondback)

Jaida Smith felt the nerves as she set her feet on the block, readying herself for the women’s 200-meter race.

In the lane behind her was Ohio State’s Anavia Battle, a five-time individual Big Ten title holder and one of the fastest sprinters in the nation. Inclement weather conditions didn’t make things any easier either, but the junior reminded herself of what’s ahead: the Big Ten championships.

So, Smith sprinted toward a blazing 23.65-second finish, breaking a school record set by Toni Jefferson in 2002.

But for Smith, whose goal has been to sink below the 24-second barrier, the weight of breaking a nearly 20-year-old record still hasn’t quite set in yet.

And her performance set the tone for the rest of a record-setting weekend for Maryland track and field in Columbus, Ohio. The Terps came away with eight personal bests and a number of program records and podium finishes.

The performance comes at the perfect time, as the team gets ready for championship season.

Among the highest achievers this past weekend were members of the throwing teams. Jeff Kline and Hayden Tobias stole the show, with the freshmen duo giving their strongest performances all season.

Kline etched his name into Maryland history when he threw for a mark of 18.58 meters in the shot put. While it wasn’t enough for a podium finish, the mark was a personal best and moved Kline to No. 4 in school history.

Meanwhile, Tobias took home a first-place finish in the men’s shot put open. His mark of 17.82 meters was a personal record and the eighth best time in program history.

On the women’s side of the field, senior Angel Nkwonta celebrated her birthday with a third-place finish in the women’s hammer throw. Her toss of 59.46 meters fell less than one meter shy of second place.

The story was the same on the track as well, as the Terps continued to accrue records and podium finishes.

It started with Bria Mack and Smith, who both delivered strong performances in the qualifying round of the women’s 100-meter dash. The two advanced to the finals behind times of 11.61 seconds and 11.73 seconds, respectively. Mack turned it up a notch in the finals, finishing the race in a blistering 11.60 seconds — moving the senior to No. 4 all time in the team record books.

Sophomore Anna Coffin, who was competing in her first meet since the 2020 indoor season, showed no signs of rust. She set a personal record in the women’s 1500 meter with a time of 4:39.25. It marks the third consecutive personal record for Coffin, each set in a different event.

Joe Ewan and Kamari Trotz showed out on the men’s side of the track. Both set personal records in the preliminary round of the men’s 100-meter dash, nearly finishing back-to-back with times of 10.60 seconds and 10.68 seconds, respectively.

Trotz outdid himself by the narrowest of margins just one hour later, when the freshman ran a new personal record of 10.67 seconds in the 100-meter finals. Ewan followed with a time of 10.70 seconds as the two finished sixth and seventh.

With Big Ten and NCAA championships looming, Valmon and Smith said they believe Maryland’s success this weekend could serve as momentum moving forward.

“This is something we can build on in the next few weeks heading into championship season,” Valmon said.

“I just tried to tell myself, ‘This could be what it’s like in two weeks at Big Tens,’” Smith said.