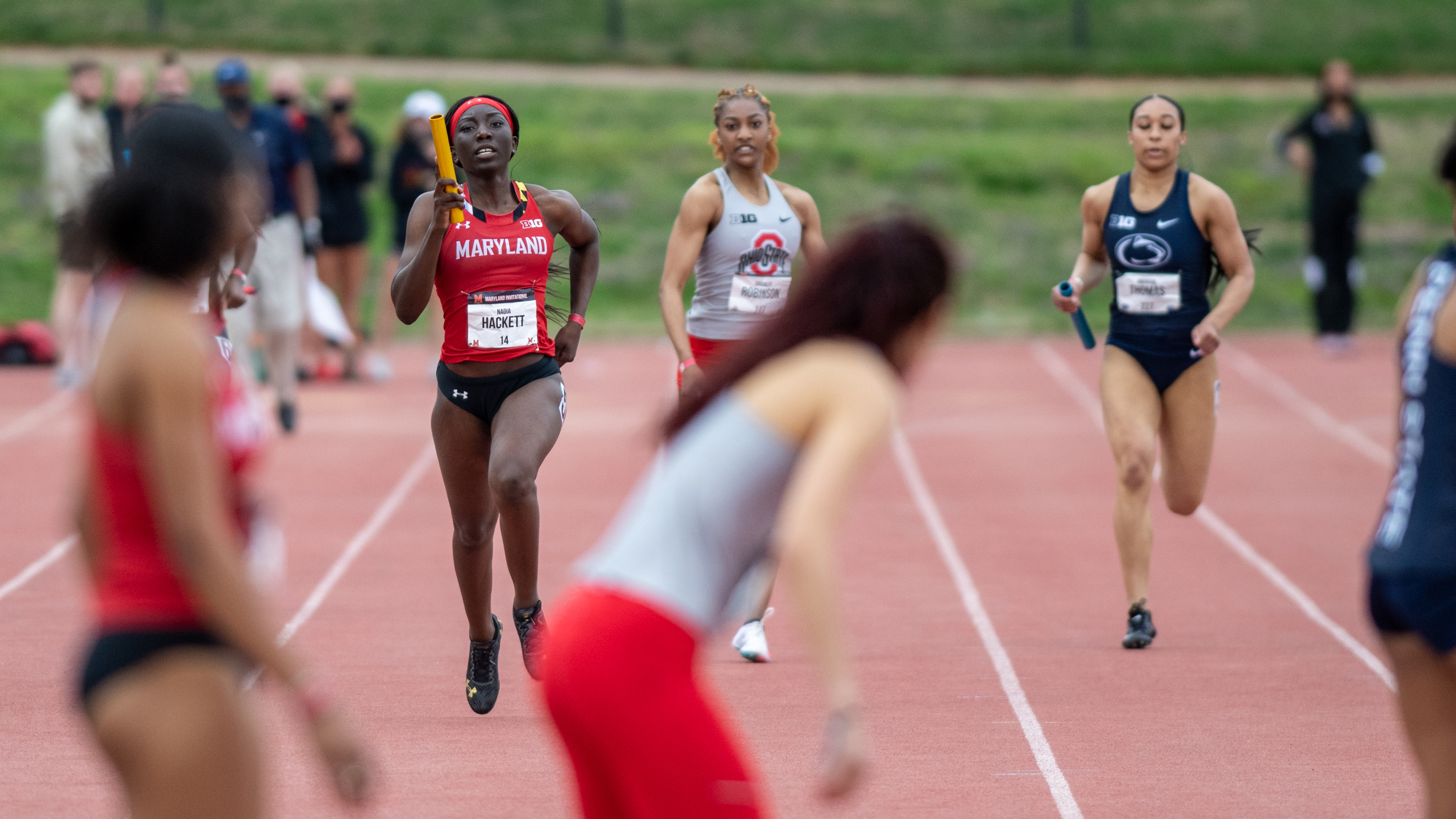 Senior Nadia Hackett darts down the track in the 4x400m relay during the Maryland Invitational at Kehoe Track in College Park on March 27, 2021. (Joe Ryan/The Diamondback)

As Nadia Hackett lined up on the track and got on her block for the women’s 100-meter hurdles, there was one thing on her mind that she and her coaches had been working on: confidence.

It was the missing piece to her game.

As the senior got on the block, awaiting the gun shot to take off, it was the main thought on her mind: Be aggressive and confident.

And the rest was history. Hackett bolted off the block for a 13.77-second finish, good for first place, a personal record and the third-fastest time in school history. She excelled elsewhere during the weekend, too, earning first place in the women’s 400-meter hurdles with a mark of 1 minute, 2.02 seconds.

It was an experience that left the senior feeling blessed.

“I’m feeling very grateful for the opportunity to come back after a year of not competing and being able to work my way up the ranks and the record book,” she said. “This performance has definitely set a standard for myself, so my goal is only to improve from this and continue to trust myself and my coach.”

Hackett’s performance Saturday at the Rutgers Tri-Meet capped an electric weekend for a Maryland track and field squad that set 13 personal records. Many of the dashing performances came from members of the throwing teams.

Star thrower Angel Nkwonta, who had a slow start to the outdoor season, bounced back in impressive fashion, taking first in the women’s hammer throw with a mark of 60.44 meters. She had a good showing in the shot put as well, throwing for a distance of 14.79 meters, good for third place.

Meanwhile, Alice Barnsdale took second place in the hammer throw with a mark just shy of Nkwonta, throwing for a distance of 59.96 meters.

Leah Blackall had a stellar weekend as well, earning her second first-place finish of the outdoor season in the triple jump. Her mark of 12.54 meters was her best competition attempt since 2019.

One of the team’s most consistent athletes, Gerald Norgbe, had another strong showing in the triple jump, finishing second with a mark of 13.88 meters. The last time the sophomore finished outside the top three in the event dates back to over a year ago.

Drake Murphy and Brandon Turpin both saw career bests in the men’s 110-meter hurdles with times of 14.84 seconds and 14.98 seconds respectively, while freshman Peter Capozzoli set a personal record in the 800-meter with a time of 1:58.68.

And Brady Snelson clocked a new personal best in the 1500-meter with a time of 3:57.42. While the senior was less than a tenth of a second away from a third-place finish, he was able to shave nearly seven seconds off his previous record, a mark he set in 2018.

In the 1500-meter race, Samantha Facius took off at a career-record pace, setting a personal record of 4:39.57. But the sophomore was unable to overtake Rutgers’ Brooke Riedy, trailing the victor for a second-place finish. Facius’ teammate, Mackenzie Morgan, slotted in third with a time of 4:44.52.

It was a magnificent showing for a Maryland squad that looks to keep getting better and better. The 13 personal records set this weekend — the most by the Terps this season — is a signifier of promising results to come.

“I saw a lot of fight from the squad, and we are moving in the right direction,” coach Andrew Valmon said.