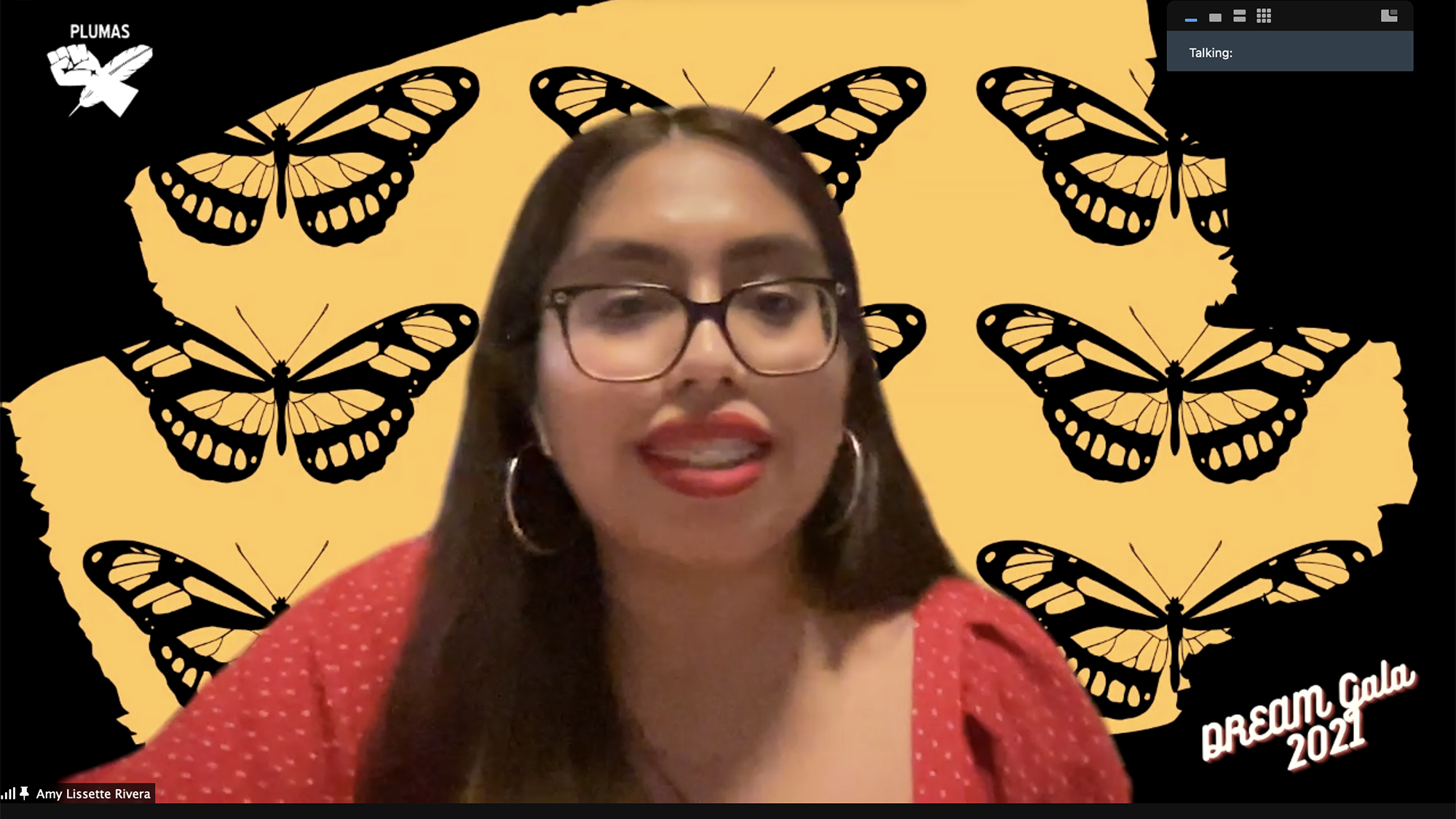 Amy Rivera, president of Political Latinxs United for Movement and Action in Society, speaks at the virtual DREAM Gala on April 29, 2021. (Amanda Hernández/For The Diamondback)

CLARIFICATION: This story has been updated to better reflect Erica Puentes Martínez’ speech. In her speech, she quoted a 2014 Diamondback guest column by former PLUMAS member Astrid Diaz.

Latino-based advocacy group Political Latinxs United for Movement and Action in Society held its fourth ever Dream Gala — an event celebrating the accomplishments of the national and local immigrant community.

Leading up to the event, PLUMAS raised $790 to support the Dream Fund, which supplies undocumented students with money to cover legal fees and other emergencies. During the 2018 and 2019 Dream galas, PLUMAS raised a combined $7,000.

The virtual gala was hosted jointly by PLUMAS President Amy Rivera and Rocío Fregoso-Mota, the University of Maryland’s coordinator for immigrant and undocumented student life. The gala’s theme was “looking back to move forward,” which included reflection on the successes and challenges in the immigrant community in order to strengthen the community’s future.

“We’re going on a journey together,” Rivera said.

Rivera first discussed the origins of the Dream Gala, which started during the 2016-17 academic year to financially support undocumented students and to celebrate immigrant life and community.

Rivera then walked about 25 attendees through a timeline dating back to 2012 — a year before PLUMAS was founded at this university. The timeline detailed several key events in the immigrant community, such as the creation of the Deferred Action for Childhood Arrivals program and the implementation of the Maryland Dream Act, which allows undocumented high school seniors to qualify for in-state college tuition.

Karen Guzman, one of PLUMAS’ co-founders, and parent and community organizer for the Prince George’s County Educators’ Association, spoke shortly after. She reminisced on how far PLUMAS has come in eight years. Growing up in a mixed-immigration status family from Bolivia, the topic of immigration hits home, she said.

[UMD no longer has a contract with ICE]

Guzman emphasized the impact PLUMAS’ presence had on the Latino community on the campus in creating solidarity and safe spaces.

“Every single PLUMAS member and leader who has been involved from 2013 through 2021 is writing history and perhaps this time we’ve traded the pen for a marker and are writing it in even bigger, bolder brighter letters, both in UMD and in our communities,” she said.

Erica Puentes Martínez, a former PLUMAS president and current faculty assistant at this university’s African American studies department, also spoke on her experience in the organization and the current state of immigration rights. She stressed the importance of holding all politicians accountable regardless of their political affiliation.

Guzman tapped Puentes Martínez to take on the presidency in 2014 after only meeting once before. They hardly knew each other then, but looking back now, they shared a deep connection. They “shared struggles as Latinas, as daughters of immigrants, as young women of color,” she said. But what truly united them was their “restless desire for justice and… love” for their communities, she added.

“I felt and was animated by this love, time and time again by many people,” Puentes Martínez said. “I saw it in the other student organizers from various communities that we work with, and I learned a lot about this love from the youth immigration rights activists.”

There was once a time, though, when Puentes Martínez and others never thought to challenge the Democratic party, she said. She added that many felt members of the Democratic party were allies in their struggles. After protesting the deportation of undocumented immigrants at a rally for Hillary Clinton at this university, Puentes Martínez said she found the power of “disruptive, direct action.”

“The time for respectability has long passed,” Puentes Martínez said, echoing former PLUMAS member Astrid Diaz. “Why should we wait patiently and politely as politicians sit idly while our families are torn apart?”

The event’s last speaker, Cathryn Paul — an alumna of this university and research and policy analyst for CASA Maryland — spoke on the several state bills that passed over the past couple of months concerning immigration policy and safety.

The Dignity Not Detention Act, which was passed in early April, bans the renewal or creation of new state contracts with detention facilities — essentially shutting down “ICE detention in Maryland as we know it,” Paul said.

The Maryland Driver Privacy Act, which also passed this month, prohibits U.S. Immigration and Customs Enforcement officers from accessing driving records and other MVA data that belongs to undocumented residents without a warrant.

“We have not seen real immigration reform in Maryland since the DREAM Act passed,” Paul said. “This is a humongous step forward.”

In addition to these policy changes, Paul also celebrated the establishment of the Governor’s Office of Immigrant Affairs and expansion of earned income tax credit eligibility, which can help qualifying individuals who file with ETINs to receive upwards of $1,000 or more, she said.

Rivera and Fregoso-Mota discussed different ways members of the university community can support the immigrant community such as volunteering with local groups such as CASA and the Audelia Community Response Team. The group also shared resources for students such as the Undocumented Student Program and CARE to Stop Violence.

Guzman also reflected on the organization’s name. In Spanish, “plumas” translates to “feathers.” In Egyptian and Native American cultures, it symbolizes heightened awareness, lightheartedness, enlightenment and divinity in progress, she said.

And if you were to drop the ‘S’ in PLUMAS, you’re left with “pluma,” which means pen and signifies the group’s efforts to promote change, she added.

“We are and have been writing history through our organization,” Guzman said.