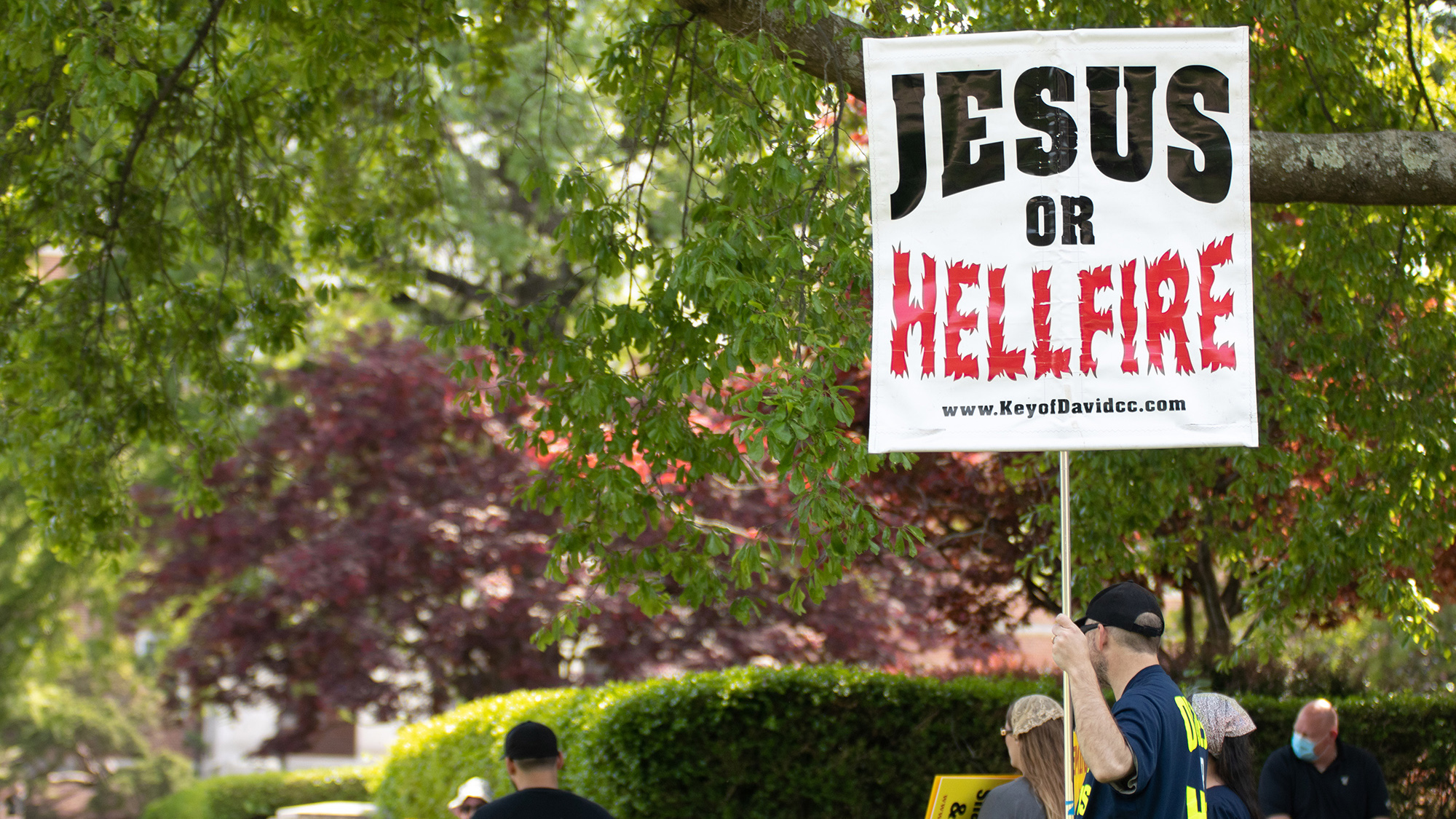 A demonstrator from the Key of David Christian Center holds a sign that reads "Jesus or Hellfire" on the McKeldin Mall on April 28, 2021. (Julia Nikhinson/The Diamondback)

By Emily Williams and Christine Zhu

A group of six demonstrators armed with signs that read “Jesus or Hellfire” and “feminists are whores,” drew a crowd next to the University of Maryland’s McKeldin Library, as they yelled at students, especially those who were women, Muslim, Jewish or part of the LGBTQ+ community.

For about three hours, the group attempted to preach at students, telling them that they were sinners and going to hell for not being a Christian, being a “whore” or being gay. Yet they were met with laughter, the singing of “WAP” by Cardi B and Megan Thee Stallion and applause from dozens of students when they were told they were going to a “lake of fire.”

And this isn’t the first time it’s happened.

In September 2019, members of the Key of David Christian Center, in a similar fashion, made sexist, homphobic and islamaphobic remarks on campus. Subsequently, the campus community responded by turning out in large numbers to confront the group. But this time a different group of two men, two women and two children were met with a smaller crowd of students.

“My first chuck was kind of lackluster, I didn’t get enough arc… so [I] had to go up there, get it, persevere, and then chuck and I got a nice skid, went right through his feet,” he said.

Alpha Bah, a sophomore mechanical engineering major, was skateboarding through campus on his way to study, when he decided to “have some fun,” he said.

Instead, one of the demonstrators said he wanted  to “judge” Bah. The demonstrator said that Bah stood at a six on a scale of 1-to-10 of how likely it was that he would go to hell.

While Bah acknowledged that these people were “trolling” and their words weren’t to be taken seriously, he said the comment was a bit upsetting, because it is the month of Ramadan — a time when Muslims are trying to better others and their communities, regardless of religion, Bah said.

“The fact that they are so sad that they have to come out here and, like, tell us all this, and, like, try to pull up this whole ruse,” Bah said. “Low key, it’s like thank you for the free entertainment.”

Junior biochemistry major Caleb Karbowsky was also “judged” by the man. A self-described “very devout Christian,” he found it “excessive” that the group was so quick to judge.

“They should try and just let everybody mind their own business and if they have their own beliefs, that’s fine… but they shouldn’t try to force it on other people,” he said.

Sisters Josie and Xanxan Danckaert watched the spectacle unfold, and wondered why the group decided to come to a college campus — where there appeared to be little hope of converting anyone if that was the group’s intention, they said. At one point, the demonstrators said that women shouldn’t be in college, which coupled their sign that said “women belong in kitchens.”

“She’s telling us why we shouldn’t be in college at our college. It’s not gonna work out very well,” Josie Danckaert said.

Freshmen Chris Egan, an astronomy major, and Reece Gamble, a government and politics major, sat on a ledge on McKeldin right next to the demonstrators, joining a group of students who continuously refuted the claims from the demonstrators, which included that the female students were all whores because they were wearing clothing appropriate to the 84 degree weather that afternoon, and that to be a man, you had to change a tire, say no to women’s sexual advances and be a “born again virgin.”

The two said they were there for the entertainment.

“It’s funny to watch it happen more than anything and that’s why I’m not particularly offended,” Gamble said.

Sarah Wishinsky, a freshman psychology major, said she was coming to study on the mall with her friends, when she saw the demonstrators’ signs. At first she wasn’t sure whether it was a social experiment or not, and decided to stick around while waiting for her friend, she said.

Then, the group started saying that only Christians go to heaven.

“I was like, ‘I’m Jewish what about me?’” Wishinsky said. “They were like, ‘You’re going to hell,’ and they’re like ‘You have blood on your hands,’ all that.”

Wishinsky said students just made a joke out of them.

At the end of the day, Bah said, no one should be giving the group any merit or credit. And the general consensus of students counter-protesting was that this group was not going to influence any other students with their message.

CORRECTION: Due to a reporting error, a previous version of this story misstated the phrase on a demonstrator’s sign. It read “Jesus or hellfire,” not “Obey Jesus or hellfire.” This story has been updated.