The 10 best Maryland sports squads from the past four years 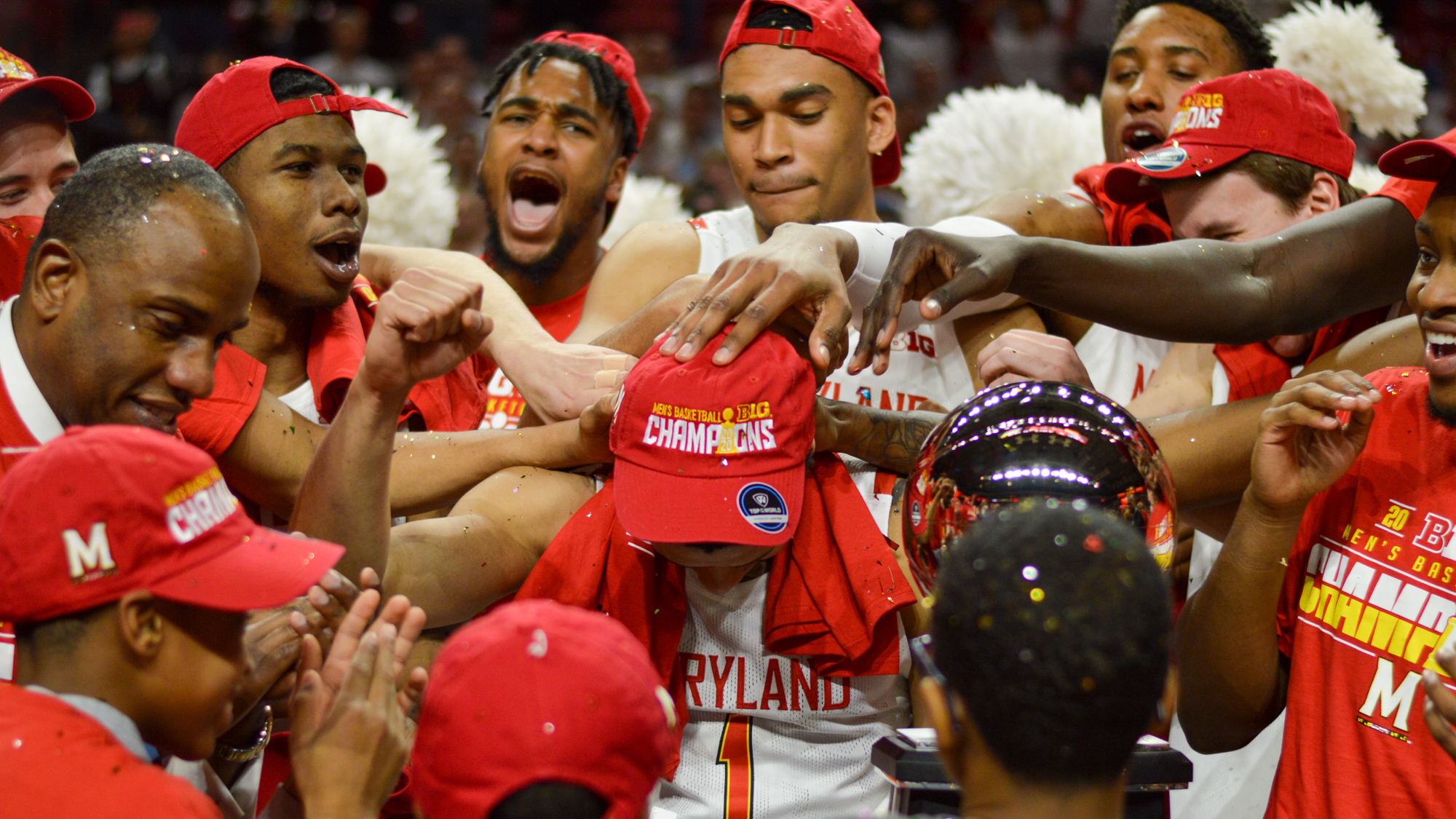 Maryland men's basketball celebrates winning a share of the Big Ten title after an 83-70 win over Michigan at Xfinity Center on March 8, 2020. (Joe Ryan/The Diamondback)

The University of Maryland’s class of 2021 has seen a bevy of high-level athletics. From national championships and Big Ten tournament titles to a pandemic rocking the sports world, there has been no shortage of action surrounding Maryland athletics. Here are 10 of the best Maryland sports teams over the past four years.

Two days after its best offensive showing in the last 15 years, Maryland women’s lacrosse’s defense stepped up in the NCAA Championship, with goalkeeper Megan Taylor holding Boston College to its lowest-scoring total of the season. As the clock hit zero, coach Cathy Reese’s team had completed a 22-1 campaign and claimed its 15th national title. The Terps were consistently among the best teams in the country, going undefeated in Big Ten play and ranking in the top five in both scoring offense and scoring defense.

In the 57th minute of the 2018 NCAA men’s soccer national championship game, Maryland captain Amar Sejdic nailed a penalty kick to push the Terps ahead of Akron, 1-0. That was all Maryland needed to secure coach Sasho Cirovski’s third national title. The victory ended a perfect postseason for the Terps, who allowed no goals during the NCAA tournament. Four of the five players in that defensive line are currently on MLS rosters, a testament to its ability to protect the net.

No. 2 Maryland was in a stalemate with No. 3 Princeton for over 77 minutes during the 2018 NCAA tournament semifinal game. In overtime, Big Ten Freshman of the Year Bibi Donraadt split two defenders and nailed a shot, sending coach Missy Meharg’s squad to its 14th national championship game. The team ultimately lost to North Carolina in the championship, its third loss all year. Still, Maryland finished the season as one of the best offenses and defenses in the nation — falling to a Tar Heels squad with the best goal differential in the nation.

On March 13, 2020, the Maryland women’s basketball team had just won the Big Ten tournament before the NCAA canceled the tournament due to COVID-19. But March 13, 2021, was a different story for coach Brenda Frese’s squad. The top-seeded Terps, who had lost two games all season, blew out the Iowa Hawkeyes and soon earned a No. 2 seed in the NCAA tournament. The team had one of the best offenses in NCAA history, led by the prolific Ashley Owusu and lights-out shooting of Katie Benzan. In the Sweet 16, Maryland was punished for its one poor showing of the season, falling to Texas.

On a December evening in 2019, Anthony Cowan Jr. launched a deep 3-pointer. His shot sank through the net, sending the Maryland crowd into a frenzy. The shot helped catapult the No. 3 Terps to a victory, storming back from a 15-point deficit. This game was one of many memorable moments for Jalen Smith, Cowan and the rest of coach Mark Turgeon’s 2019-20 squad. The season culminated with a win over Michigan to secure a share of the Big Ten regular season championship, before the cancellation of the end-of-season tournaments.

The only thing in the way of No. 1-seed Maryland’s fifth straight trip to the final four was the hottest team in the country. Facing Cornell in the NCAA tournament quarterfinals, a six-goal run in the second half powered the Terps to a 13-8 defeat of the Big Red in Annapolis. They eventually fell to Duke University in the NCAA Semifinals.

Ashley Owusu stood on the platform at the center of the court with her smiling teammates after No. 6 Maryland women’s basketball blew out Ohio State, 82-65, to claim the Big Ten championship. The Terps’ star freshman guard had just scored 17 points and added 11 assists. While this win for coach Brenda Frese’s stellar squad turned out to be its last because of the COVID-19 pandemic, it capped a season where the Terps ran through Big Ten play with a 16-2 record — and a campaign that culminated in a 17-game win streak.

After the 2018 Big Ten women’s lacrosse tournament title game was tied 3-3, attacker Megan Whittle broke the game open for Maryland. She netted back-to-back goals, sparking a five-goal run. The Terps wouldn’t look back from there, leaving Ann Arbor, Michigan, with a 21-12 win, their third straight Big Ten championship. The team ultimately lost to Boston College in the NCAA semifinals.

On a cool evening in October 2019, Maryland field hockey hosted Michigan State for its senior night and home finale — and a chance to clinch the regular season Big Ten championship. And it did. Coach Missy Meharg’s squad pulled off a 5-1 rout of the Spartans and capped a nearly perfect regular season, with just a pair of 1-0 losses coming against Duke and Michigan.

Maryland women’s golf hadn’t reached the NCAA tournament in seven years. But after a number of impressive showings throughout the 2018-19 season, the Terps ended up securing a trip to Opelika, Alabama, for the NCAA regionals, where they placed seventh out of 18 squads.