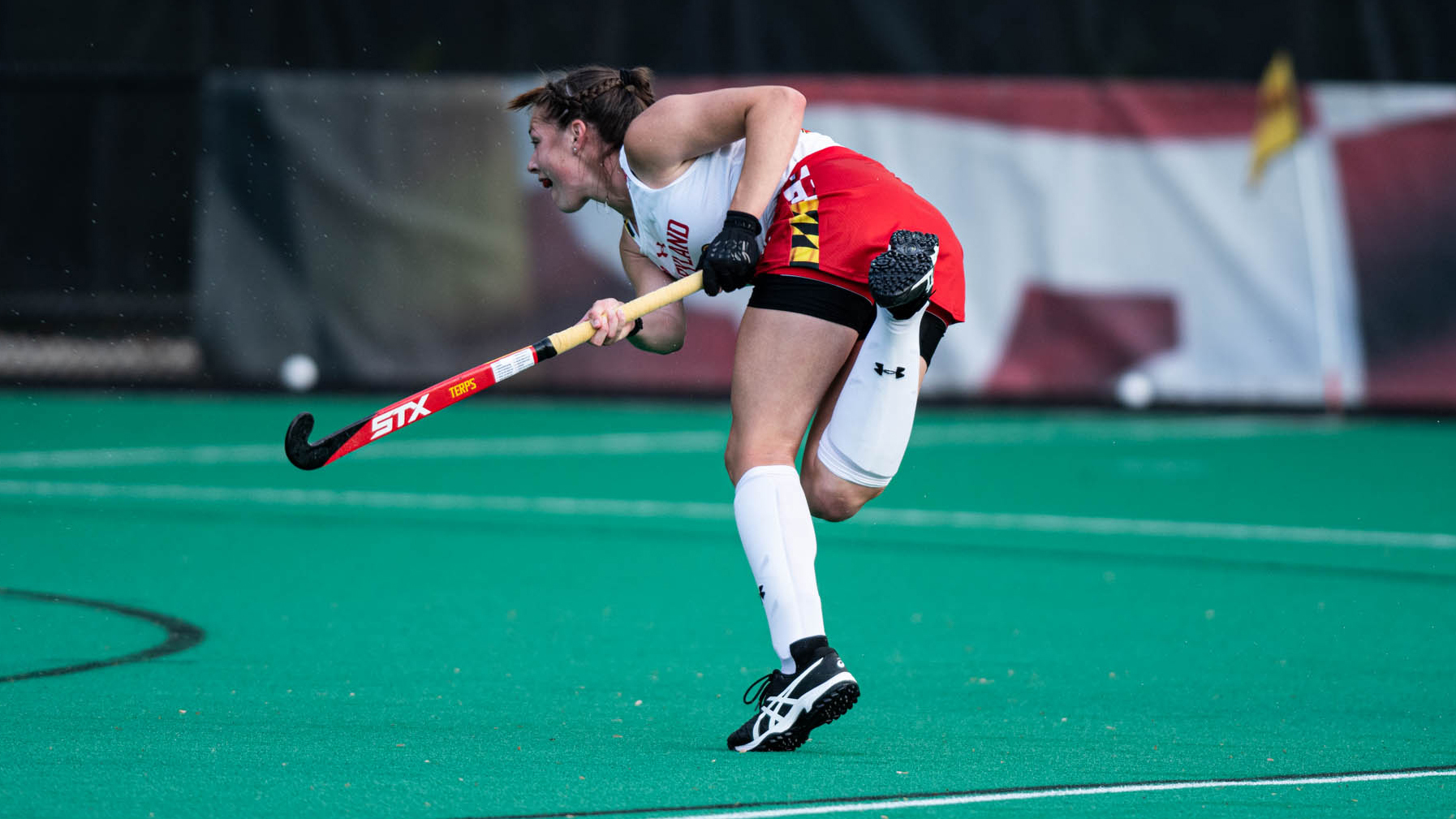 Riley Donnelly stood tall, staring down Rutgers goalkeeper Gianna Glatz. For the third time this season, Maryland field hockey had drawn a penalty stroke, and its drag-flicking shooter was looking to bury it for the third time.

And she did. With triple zeros lighting up the clock on the Field Hockey and Lacrosse Complex scoreboard, Donnelly dragged her shot past Glatz, giving the Terps a 2-1 advantage over a top-ten opponent.

They didn’t look back. Maryland posted its second-highest scoring performance of the season, downing the No. 6 Scarlet Knights in a 4-2 slugfest.

Coach Missy Meharg has talked throughout the season about the importance of not just drawing penalty corners, but capitalizing on those opportunities. And on Friday, the Terps did just that: three of their four goals resulted from penalty corners.

“I would say in a week we probably trained an hour and 45 minutes just on penalty corners,” Meharg said. “Penalty corners are one of those things that if you just keep working and being vigilant, they’re going to fall.”

As the sun peeked over the Field Hockey and Lacrosse Complex, Maryland’s attack got started early. After a series of passes, Kyler Greenwalt took a hard shot that bounced off Rutgers goalkeeper Glatz’s blocker.

The Scarlet Knights soon gained possession and drew the match’s first penalty corner. Bridy Molyneaux’s subsequent effort evaded goalkeeper Noelle Frost, leading a wave of white and black jerseys to rush in front of the cage. The ball eventually drifted out of play and Rutgers was awarded another corner.

This time, the Scarlet Knights capitalized. After the initial shot from Milena Redlingshoefer was kicked away by Frost, it ended up in the back of the net, courtesy of a last-second intervention by Liz Romano.

Not even four minutes into the match, Rutgers had a 1-0 lead. And it took about eight minutes for the Terps to draw their first corner — when Donnelly was instantly greeted by a swarming Scarlet Knights’ defense after attempting the shot.

The wind started to blow as the clock was reset to 15 minutes. And neither offense could get a shot off for nearly seven minutes.

But when Maryland did break out of its shotless stupor, it did so with style. Donnelly was the point figure, cushioning a set before rifling a shot that careened off the post and out of play.

Then came the storm. Three-and-a-half minutes later, defender Maura Verleg blasted the ball toward net. Glatz got a strong touch on the ball, sending it up into the air.

But midfielder Emma DeBerdine was quick to pounce, slipping in to tap the ball into the cage and knot the score at one.

“Getting goals is fun,” Emma DeBerdine said. “It was exciting.”

Still, Meharg’s squad wasn’t done. Not even when the horn sounded to end the first half.

With triple zeros on the clock, Maryland was awarded its fourth penalty corner of the half. On the subsequent effort, a foul was adjudged on Rutgers, giving Meharg’s squad a penalty stroke.

And for the third time this season, Donnelly buried the free shot, using her signature drag flick to send the ball past Glatz — giving the Terps a 2-1 upper hand as they excitedly ran to the locker room.

Maryland’s liveliness continued to show itself in the second half. Penalty corners — a challenge for the Terps at times this season — offered yet another outlet for Maryland to overpower the Scarlet Knights’ weary back line.

On their sixth corner of the day, they struck once more. Fiechter set the ball up for Verleg, who summarily rolled her shot sharply inside the right post.

“I’m super proud of Maura. She had a new penalty corner that we put in,” Meharg said. “And she nailed it the first time we’ve used it.”

Maryland was fired up. It had a two-goal lead over the No. 6-ranked team in the nation. And it kept its intensity going throughout the frame, eventually adding a fourth in similar fashion.

The Terps lined up for another corner attempt with just under a minute to play. Donnelly missed on her initial stroke and the ball veered across the circle. DeBerdine was the beneficiary, slotting her second goal to put the game away.

“It was very chaotic,” DeBerdine said about all the action that transpired before her second goal. “It’s exciting to finally just end it and put it in the cage, get the goal and finish it.”

The Terps headed to the fourth quarter with a commanding 4-1 lead — and already had their second-most goals scored in any match this season.

But Rutgers wasn’t quite out of gas just yet. Off its second straight corner, Redlingshoefer slotted past Frost, cutting the deficit to two with just under eight minutes to play.

Still, Maryland found a way through, holding the Scarlet Knights fairly quiet as the game drifted to its finish. With a constant threat on the other end of the pitch, the defense killed the game off with relative ease.

The Terps cruised to victory over top-ten opposition, adding a bit of color in a season largely defined by dullness.