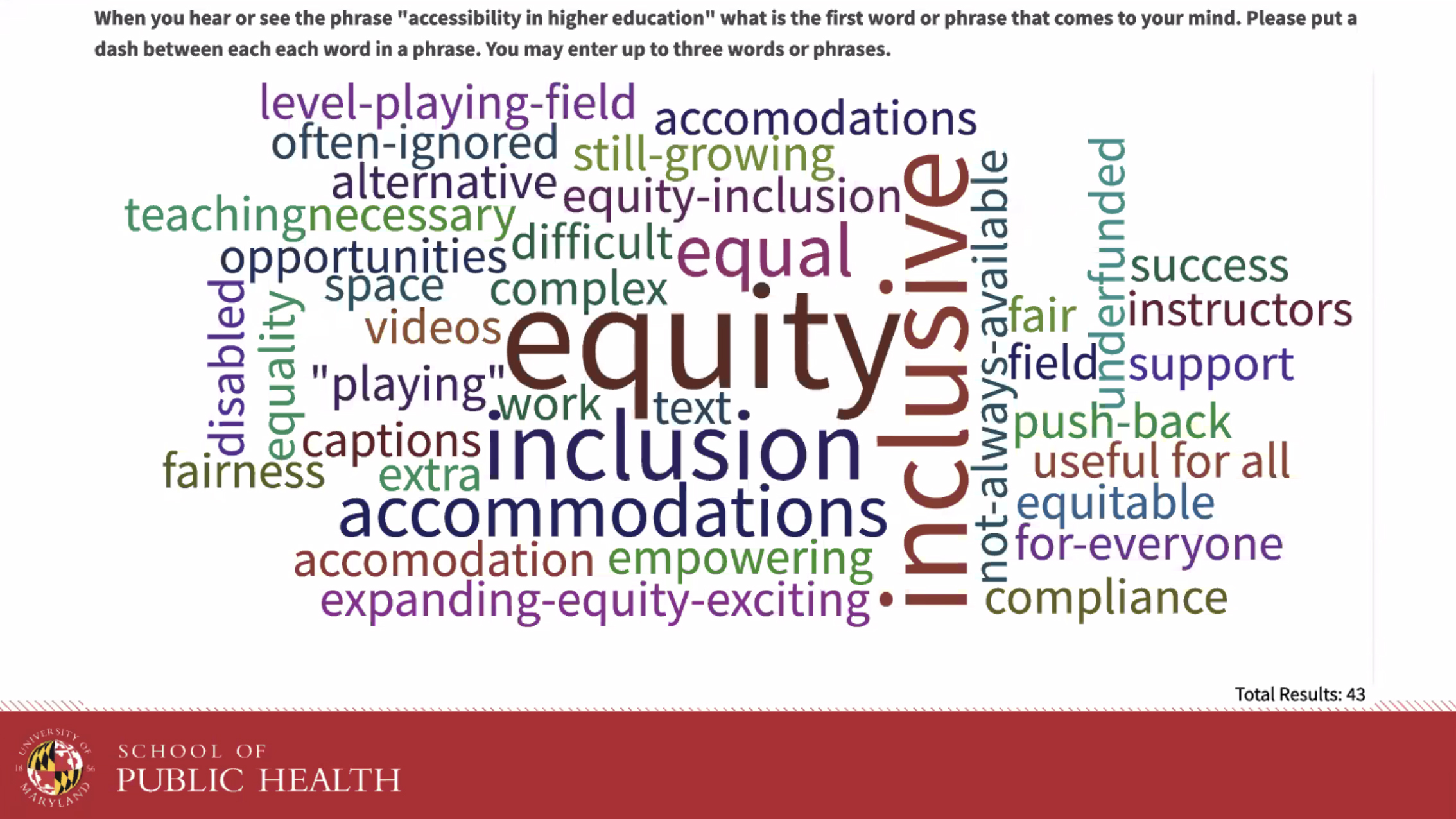 The University of Maryland held a disability summit over three days from April 12-14, 2021. (Michelle Larkin/For The Diamondback)

By Michelle Larkin
For The Diamondback

More than 1,000 people attended the University of Maryland’s disability summit this week, which focused on spreading awareness and educating the disability community.

The event, hosted by the President’s Commission on Disability Issues, marked the fourth year the disability summit has taken place at this university, but it was the first to ever dedicate three days instead of one.

“The online environment allowed us to bring in presenters from across the globe and extend the summit across three days, which is really also a lot more accessible for folks,” said Amanda Strausser, one of the summit’s organizers. “It’s just another layer of accessibility for people who cannot sit through a whole conference.”

The summit had 21 presentations on topics about disabilities, ranging from policing to accessibility in the wake of the pandemic. All of the presentations addressed challenges people who have a disability often have to overcome and how others can help.

Stephanie Cork, a co-chair of the summit, wrote in an email that this year’s summit was possible because of “the exhaustive labor of those behind the scenes.” The summit had 45 volunteers working, according to Strausser.

Strausser also said about 40 percent of the summit’s registrants were from this university, and most of the remaining attendees were affiliated with other universities, organizations and nonprofits.

One of the summit’s presenters was Raymond Nardella, a disability law researcher and employee of this university’s Department of Resident Life.

Nardella has Tourette’s syndrome and shared his experiences and insight with attendees. He called the disability “exhausting” and “painful” but said it is something he now embraces.

Nardella also talked about law enforcement and what they should know about people with Tourette’s. He cited an example he personally experienced in an airport where a TSA officer thought he was on some type of drug and asked for his medical history, which left him feeling “ashamed.”

The documentary, which featured the city of Baltimore, began with the story of Holloman and how she lost her son, who had a disability, after she called 911 to transport him to the hospital and he was killed by police.

“Police officers [are] not equipped to deal with that type of people, because they have no compassion,” Holloman said. “My goal is to make sure that they can put in some type of legal law writings, to stop police officers from being the first responders when you call out for mental health.”

The documentary showed a 2016 statistic that found 33 to 50 percent of individuals killed by police were people with disabilities.

Kristin LaFollette, an English professor at the University of Southern Indiana and co-editor of the book Queer Approaches: Emotion, Expression and Communication in the Classroom, also presented at the summit.

In her presentation, she discussed how classrooms should be constructed differently so those who suffer from post-traumatic stress disorder have a more inclusive learning space. Her presentation was based on her work with students who self-identified as having PTSD.

She said students with PTSD often struggle with sitting close to others and in confined spaces, so classrooms should remove extra furniture, space out students and desks, keep the door open and welcome service animals to help those who have PTSD.

Alex Peterson, who also helped organize the summit, said this year’s event stood out because there were “so many perspectives,” and it tied in disability with race and gender identity, making it intersectional.

Not only were some of the attendees watching from other countries, but some of the summit’s speakers presented from outside the country, too.

“It would be great to see the permanent institutional support to make this sustainable, accessible and inclusive going forward,” Cork wrote.