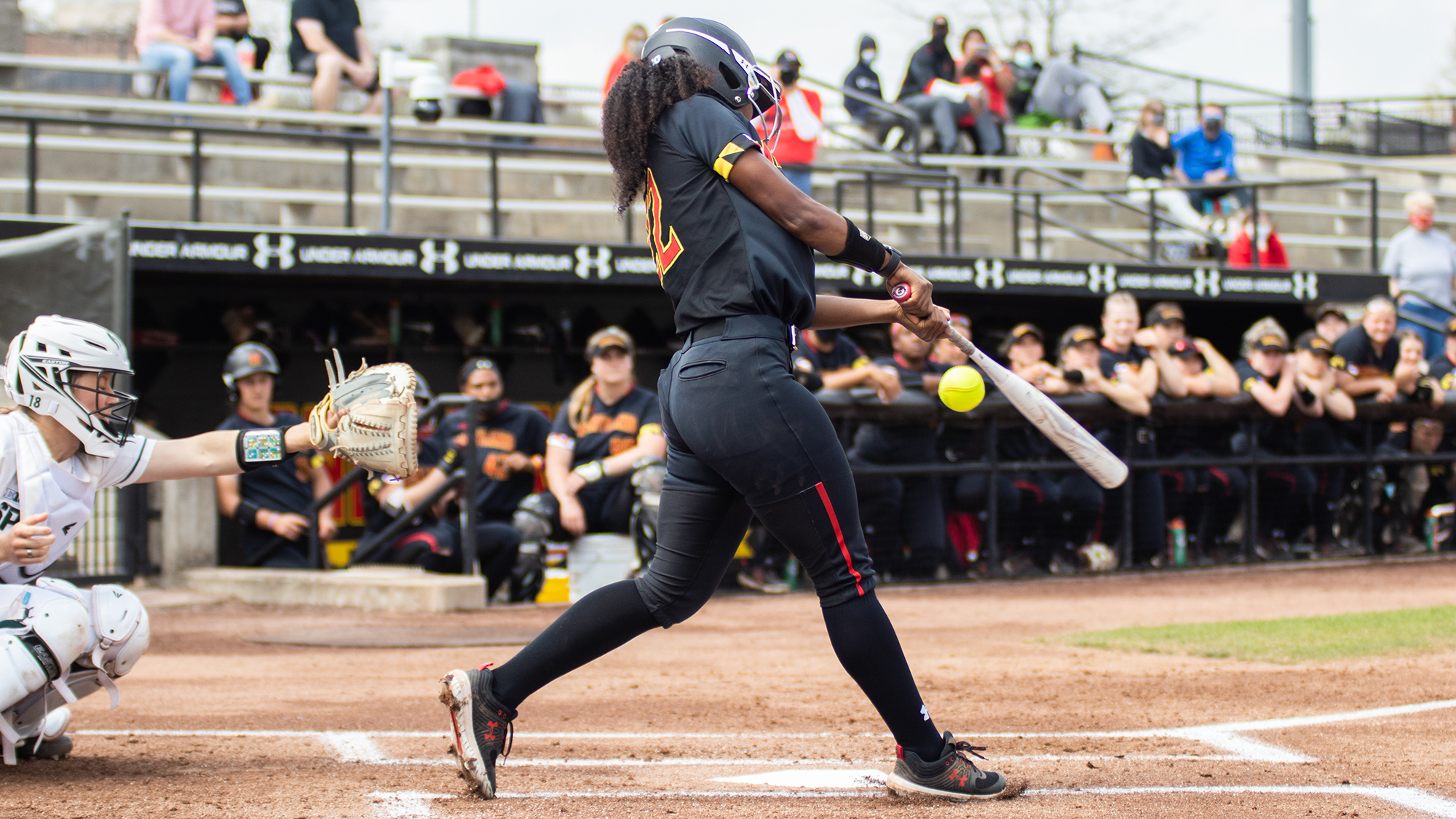 Jaeda McFarland was on third base and ready to run in the seventh inning. Maryland softball hadn’t won both games of a doubleheader yet this season — but a 60-foot dash would change that.

As Ruby Butler popped up into left field, McFarland tagged up and took off to the plate.

The throw from the outfield got closer. McFarland dove headfirst to the plate to avoid Michigan State catcher Kendall Kates. McFarland’s hand dropped to the plate before Kates could make the play, and a long home series losing streak was broken.

“I just tell myself to give it my all and avoid the tag, there’s not much you can do once you’ve already started [running],” McFarland said. “I just trust that whatever my coaches tell me, or if there are other players behind the bag, they’ll let me know what’s going on.”

The Terps brought a series win home to College Park for the first time since April 2018. Against the Spartans, coach Mark Montgomery’s squad earned its first mercy-rule victory, while many players had their best offensive performances of the season.

The weekend began ominously, though. Maryland struggled to generate any offensive momentum against pitcher Ashley Miller, who didn’t allow any runs in the series’ first game.

But after that contest, the Terps were able to turn their offense around. In Friday’s nightcap, Maryland mercied Michigan State in five innings. And on Saturday, it took both contests with strong offensive showings.

“I think our presence and our intentions changed,” McFarland said. “We talked about our loss after game one and we really discussed how we needed to come back and do it for each other and be part of this program, be bigger than yourself.”

That pep talk led some players to their most dominant offensive performances of the season. Among those breakout stars was infielder Taylor Okada. She recorded seven hits, three RBIs and one run on the weekend.

In Saturday’s contests, freshman Michaela Jones took the next step in the batter’s box. She hit her second career homer while driving in and scoring two other runs.

McFarland made five runs, one of them being her walk-off dive.

“It was really fun and exciting to be able to do that, and I think it goes to show that we’re getting better and all of our pieces are starting to fall into the right place,” McFarland said.

The Terps are leaving College Park next weekend to take on Michigan, the Big Ten’s second-best team. McFarland and her teammates aren’t nervous, though.

Its wins against Michigan State and offensive achievements against Northwestern have prepared Maryland for a difficult series next weekend and beyond.

“I think these wins have definitely brought us closer and have made us trust each other more,” McFarland said. “I think that will help us as we roll in Michigan next weekend.”