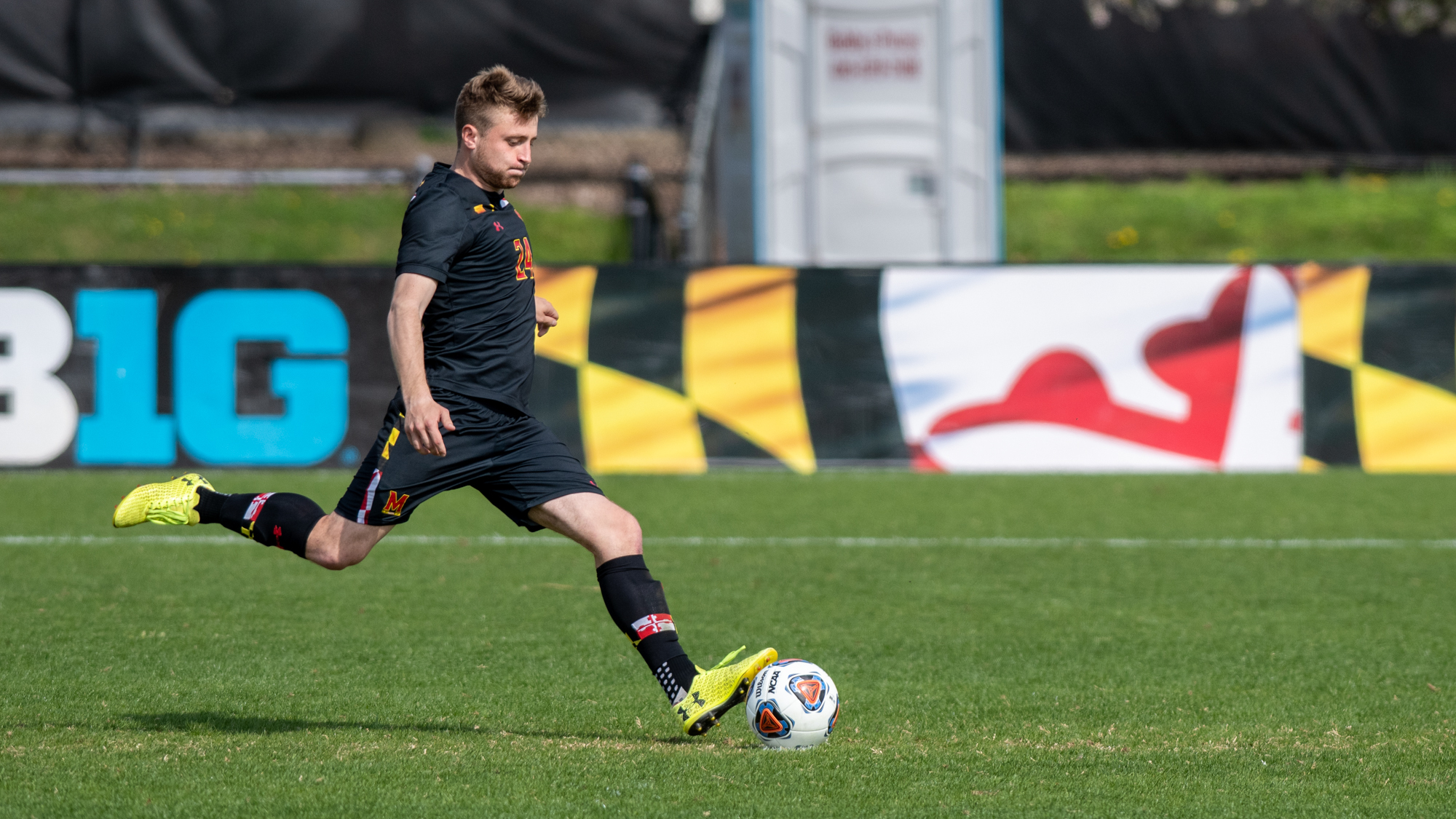 It was a long sprint to the corner flag for Maryland’s bench. But every single one made it. Mike Heitzmann was there first, swiftly followed by Jamie Lowell, the two celebrating. Heitzmann had just blasted a penalty down the middle past Rutgers keeper Oren Asher to win in the Big Ten tournament quarterfinal.

The shot was the culmination of a thrilling Saturday afternoon at Ludwig Field between the Terps and Scarlet Knights, one full of chances and controversy. And after two overtimes, Heitzmann’s winning strike sealed it on penalty kicks.

Both teams equaled each other’s efforts for 110 minutes, with two second half goals sending the game to overtime. Neither side found an edge in overtime, either. After a series of dubious no calls — one that earned Maryland men’s soccer coach Sasho Cirovski a red card for dissent — the game was decided by penalty kicks.

And the Terps prevailed.

“I knew I wasn’t gonna miss. I just knew it,” Heitzmann said.

Both teams slotted home their first attempts from the spot, but a miss from either side left it knotted at four after five penalties apiece. Lowell batted away the first kick in sudden death, giving Hetizmann a chance to win it; and the redshirt senior obliged, banging in the winner and sending Maryland’s fans into raptures.

“As soon as the second overtime whistle rang, I didn’t feel that stressed,” Lowell said. “I believe in the guys.”

After an energetic yet fruitless first half, the game came alive in the second. Maryland asserted itself, creating a flurry of chances. But Rutgers remained lively on the break, with Ola Maeland scoring the game’s opening goal with a dramatic bicycle kick in the 75th minute — busting out a backflip in celebration.

But his joy would be short lived. Justin Gielen responded shortly after, curling in a wonderful goal of his own with seven minutes remaining to knot the game at one.

“I was just screaming my head off,” Lowell said. “We needed that one.”

It was the culmination of an intense second half. The Terps asserted themselves in the opening minutes, the tandem of Ben Bender and Alex Nitzl creating opportunities down the left side of the pitch. Eric Matzelevich was the first beneficiary, lashing a shot of goal that was saved by a leaping Asher.

Brayan Padilla was next, whipping a free kick right into Asher’s arms. Gielen followed with a chance shortly after, pushing the ball past his man in the box and shooting from a tight angle, but Asher once again responded with a save.

“The second half, we came out on fire, and really pushed the game,” Cirovski said.

The Scarlet Knights remained a threat, though, something Ritchie Barry suggested by forcing a tight one-on-one save with 25 minutes to play. And Maeland proved it with his flying volley to put the Scarlet Knights ahead, 1-0.

Maryland responded eight minutes later. Gielen was offered too much space outside the box, and took two touches before bending the ball into the corner.

Both teams pushed for a winner as the game drew to a close. Asher and Lowell were both called upon to make saves, and both obliged to keep their sides in the game.

“I gotta give it all to the backline. They shut them down, only gave up a few chances,” Lowell said.

So, overtime was needed to settle the score.

Maryland had its chances. Gielen had shots blocked twice. Padilla sent one wide after a deflection. Asher made a last ditch save off Padilla. The referee denied the Terps a dubious penalty.

And the frustration boiled over for Cirovski, who barked at the ref one too many times, swiftly being shown a red card.

The score was yet to be settled at the end of the first overtime period.

However, the second offered little else. Both teams looked short of legs, with Barry coming the closest, drawing a save from Lowell from short range. So, penalty kicks settled it.

And despite running for 110 minutes, the Terps had one more sprint left — one of jubilation and delight.

“Now it’s on to the semis,” Cirovski said.