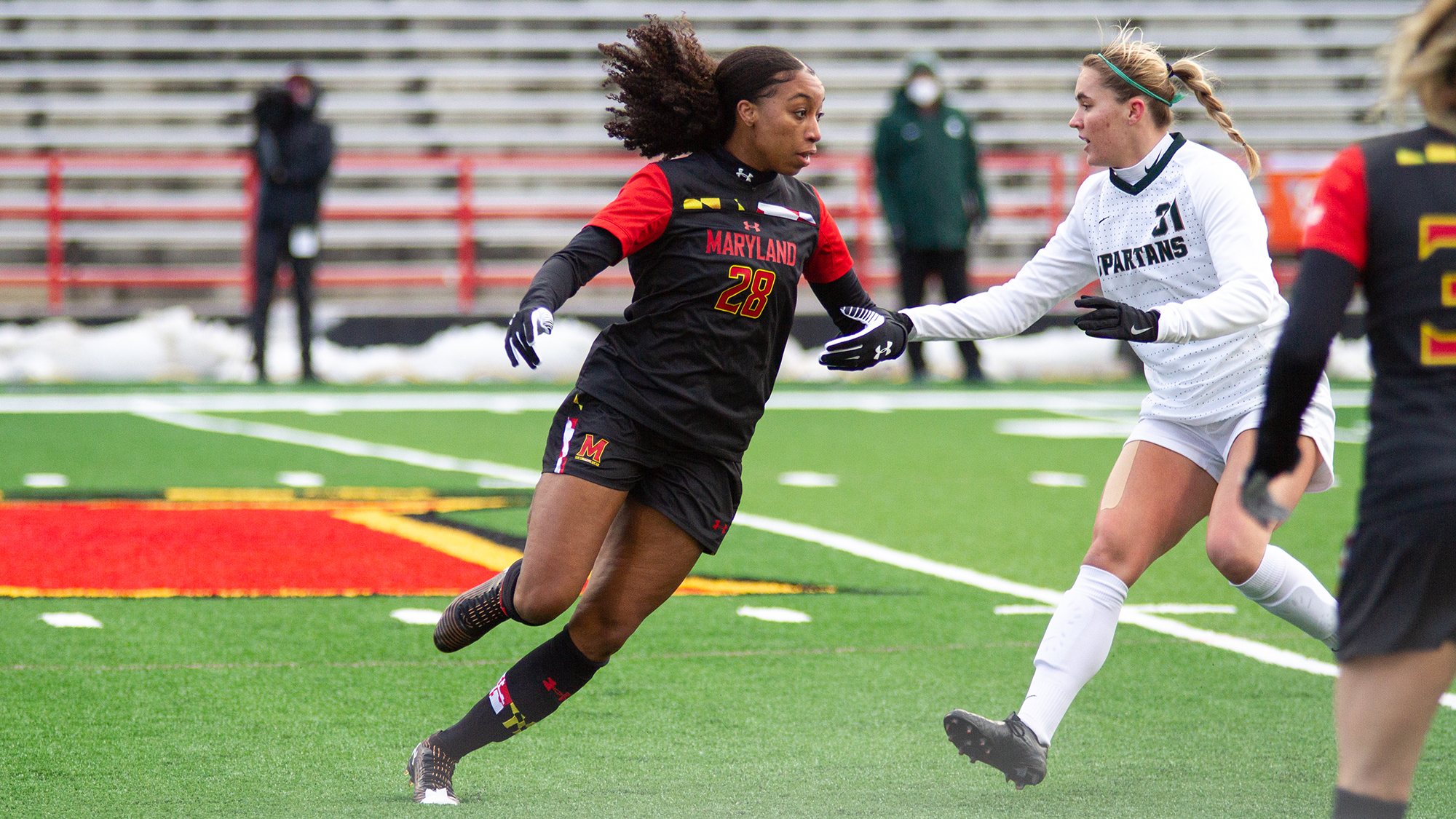 Mikayla Dayes darted down the left wing, cut inside a defender, and then looked up for a cross. As she peered into the box, she saw 4 white Minnesota jerseys, and one lone Maryland shirt, making a late run. She tried to angle her cross in, but it was comfortably cleared away — leaving Dayes frustrated.

It was a familiar sight for Maryland women’s soccer Sunday afternoon, as they toiled offensively. And after conceding in the second minute, the Terps looked lost on the other end, and could never recover, falling to the Gophers 1-0.

Maryland had its moments against Minneosta — a flashy dribble here, a good pass there. But it couldn’t string together enough to generate a clear chance on goal. And McKenna Buisman’s second minute goal was enough to carry the Gophers past the Terps.

Coming off a difficult loss to Wisconsin, Maryland women’s soccer entered its game against Minnesota hoping to finally change the course of its 2021 season.

It’s been a familiar story for the Terps. While they have a great deal of talent among their individuals, they have struggled to find synchronization as a holistic unit. Each game has become increasingly more predictable, with the opponent scoring the first goal at the start of the game, and Maryland trying frantically to catch up for the remainder of the match.

Much like last Wednesday’s loss to Wisconsin, head coach Ray Leone utilized many of his younger players today against Minnesota.

First-year Terps such as Krista Varrichione, Anna Carazza, Cathrine DeRosa and Milan Jerome-Pierre all got the chance to play in Sunday’s match.

It’s the second time that Leone has turned to his younger players for production this week.

“It’s easy to sit on the sidelines and see things,” said Leone after the loss to Wisconsin. “But now they know what it feels like to be out there.”

The Gophers, however, came out strong.

Two minutes into the game, Minnesota midfielder Katie Duong sent a long, airborne ball to the feet of McKenna Buisman. From there, Buisman charged past a diving Krista Varrichione and sent the ball to the back of the Terps’ net — throwing her arms up in celebration.

And Minnesota continued to push for a second throughout the rest of the first half. Varrichione was equal to a number of the Gophers’ efforts, though. She notched back-to-back saves off Makenzie Langdok and Celina Nummerdor in the 20th and 22nd minute. She denied Buisman a brace in the 26th.

While Varrichione was holding steady in net, Maryland’s offense made hardly a dent on the stat sheet for the first half.

Maryland couldn’t manage any shots until the 40th minute, when Olivia Reese and Alyssa Poach each attempted to score, both balls traveling towards the center of the net, and both saved by Gophers’ goalkeeper Megan Plaschko.

At the beginning of the second half, Coach Leone made a few changes to the lineup, including a choice to substitute Kennedy Tolson for Krista Varrichione.

Now well rested, Tolson was back in goal and prepared to keep the match close.

The second half of the game proved to be similar to the first — with the Gophers taking significantly more shots on net.

However, despite the heavy presence of the ball on Maryland’s side of the field, Tolson stood strong.

She tallied 3 second half saves, continuing the strong work of her predecessor between the sticks.

For all of their defensive prowess, the Terps simply couldn’t get anything going on the other end. There were lots of close moments: drives down the line that led to potential crosses, passes that showed promise in the final third.

But as the clock ticked down, Maryland lost its shape, its attacks becoming erratic, and went quietly.

So, the Terps couldn’t get anything going — turning in another stout defensive performance but struggling on the other end.

And though there were positives — good saves, flashes of offensive potential — Maryland still succumbed to another loss, and is facing a winless season.