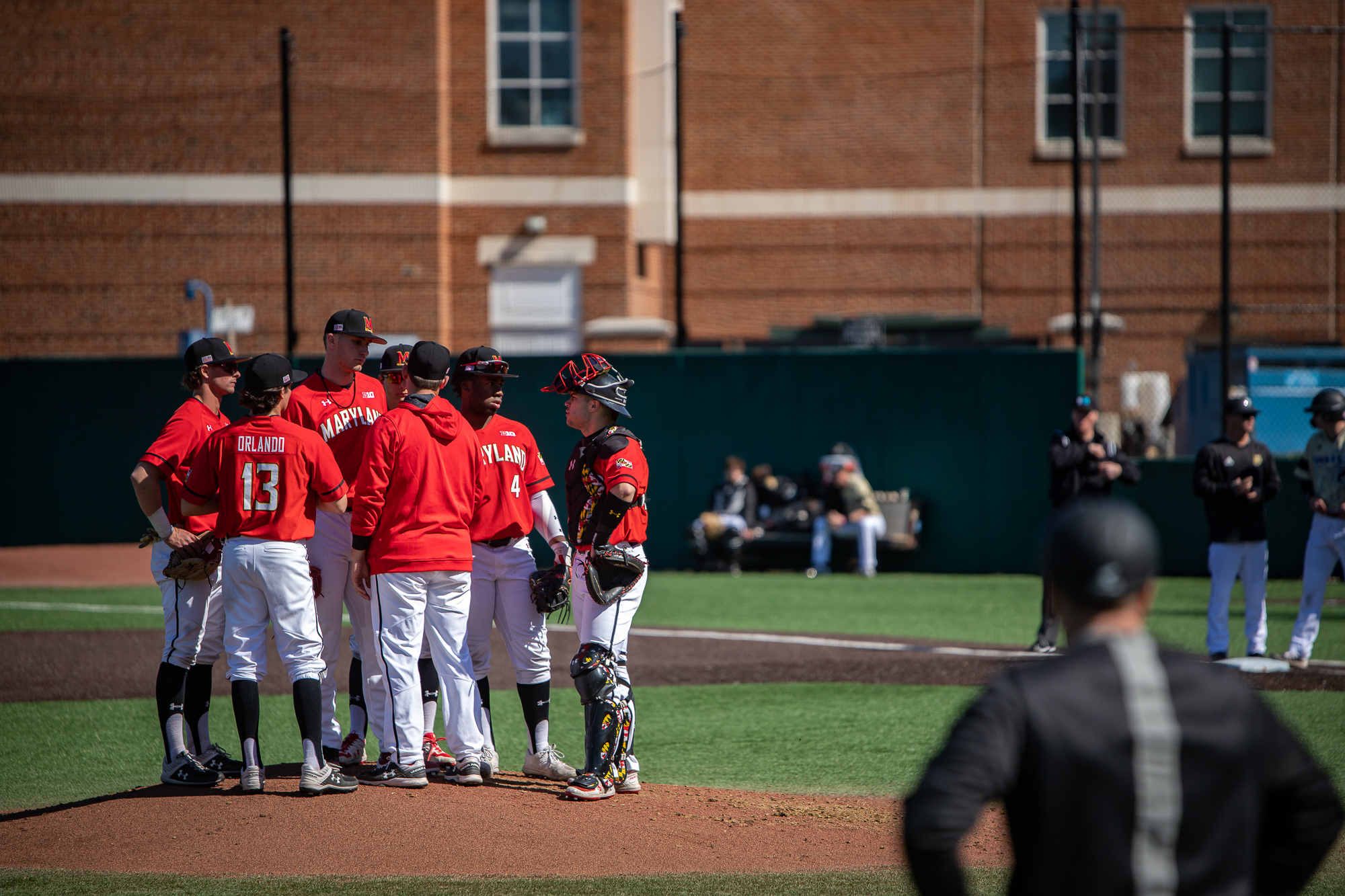 Coach Rob Vaughn meets at the mound during Maryland baseball's

All throughout Sunday afternoon and evening, there were two common themes that gripped Maryland baseball in its matchups with Iowa and Ohio State: The Terps couldn’t hit the ball with any sort of consistency, while their opponents could.

That’s all it took to send Maryland back home with a 5-9 record after losses to the Hawkeyes and the Buckeyes in Sunday’s doubleheader.

“Tough, tough day,” coach Rob Vaughn said. “Feel like we’ve been sitting here way too many times saying “hey, it was a good baseball game,” and we end up on the other side of it.”

The early returns weren’t good for the Terps bouncing back at the plate.

Through five innings of their first game of the doubleheader, Maryland had only one hit that yielded their only run of that stretch. Unless Connor Staine pitched a near-perfect game, Vaughn’s squad was staring down their second straight loss at the hands of the Hawkeyes.

But Staine didn’t quite have the juice.

In the first few innings, he was enough to keep it competitive, even as the Terps’ bats familiarized themselves with short stints at the plate.

After allowing an early solo home run and an RBI single in the second inning, Staine pitched a quiet outing. The sophomore managed five strikeouts in the outing and dominated at certain points in the third, fourth and fifth.

All it took was a disastrous sixth inning to break the game open for Iowa, though.

Staine walked the first batter and the next two advanced off of singles. The bases were loaded and set for catastrophe. It struck via a two-RBI single from Brayden Frazier and Vaughn pulled Staine in favor of Tyler Blohm.

With Blohm, things got worse. Runner after runner rotated around the bases as the Hawkeyes added to their lead over three at-bats. Sean Heine came in and ended the Terps suffering on the scoreboard.

The Hawkeyes exploded on offense to the tune of eight runs in the sixth alone to build a 10-1 lead that the Terps would never recover from en route to a 11-2 mauling. Overall, Maryland garnered five hits in the matchup — all few and far between — and never looked likely to mount a serious rally.

“We just aren’t quite ringing the bell enough,” Vaughn said.

With the Buckeyes up next, the now 5-8 Maryland needed to bounce back or risk falling behind in the Big Ten standings.

And with Nick Dean making his first start of the season, the Terps seemed up to the task.

The sophomore struck out three and allowed three hits in the three innings of action with one earned run. And his performance was supplemented by an equivalent caliber of offense.

Chris Alleyne hit a lead off home run to push Maryland out in front early. And although the offense failed to score again until the sixth inning, it appeared far more dangerous than it had against the Hawkeyes.

Ohio State would add a home run in the fourth and that would be enough for Vaughn to pull Dean in favor of Sean Fisher.

The offensive consistency wasn’t quite there yet. And neither teams showed hope of that until the bottom of the fifth inning.

Ohio State got runners on second and third, and they capitalized. One sacrifice fly and a double later, and the Buckeyes claimed a 3-1 lead.

Reliable Maryland hitters Maxwell Costes and Ben Cowles had been hitless up until the sixth, when laid down a vital bunt to score Luke Shliger. With an error scoring Bednar on the previous at-bat, the Terps had tied up Ohio State in interesting fashion.

Not to be outdone, Ohio State hoped to top the Terps in similar fashion in the bottom of the seventh.

All it took was a mistake.

As Buckeyes’ Kade Kern swung his bat forward on a David Falco pitch, the ball took a short bounce to second baseman Kevin Keister, who gathered and then dropped it, helping send two Buckeye runners home after he failed to get off a clean throw to first.

With the mistake, Maryland was now down 5-3 in a crucial game. Still, it was more than ready to respond.

A Ben Cowles RBI single in the eighth breathed new life into the Terps ‘ offense. Maryland loaded the bases shortly thereafter, setting the stage for a momentous rally.

Randy Bednar took the first two pitches calmly to make it a hitter’s count at 2-0. The 2-0 pitch was an easily predicted fastball that Bednar missed, 2-1. One hard cut toward a low ball to the right and a miss, 2-2.

A foul ball later, Bednar had a make-or-break situation with two outs, the bases loaded and two strikes against him.

The pitch was low and away but it caught Bednar by surprise. He swung and missed before walking away with his head down. The Terps had missed a massive opportunity to tie it.

“We’re playing good baseball, we’re just one hit away,” Cowles said. “One hit away from winning those two games but we’re confident.”

TJ Brock had stuffed the Terps late, and he finished it for the Buckeyes in the ninth. The red-hot junior struck Cowles out to send the Terps to 5-9.

“Our job has to be to come out tomorrow and prepare to play a really good baseball game,” Vaughn said. “Regardless of what happens the sun is gonna come up on Tuesday, hopefully.”