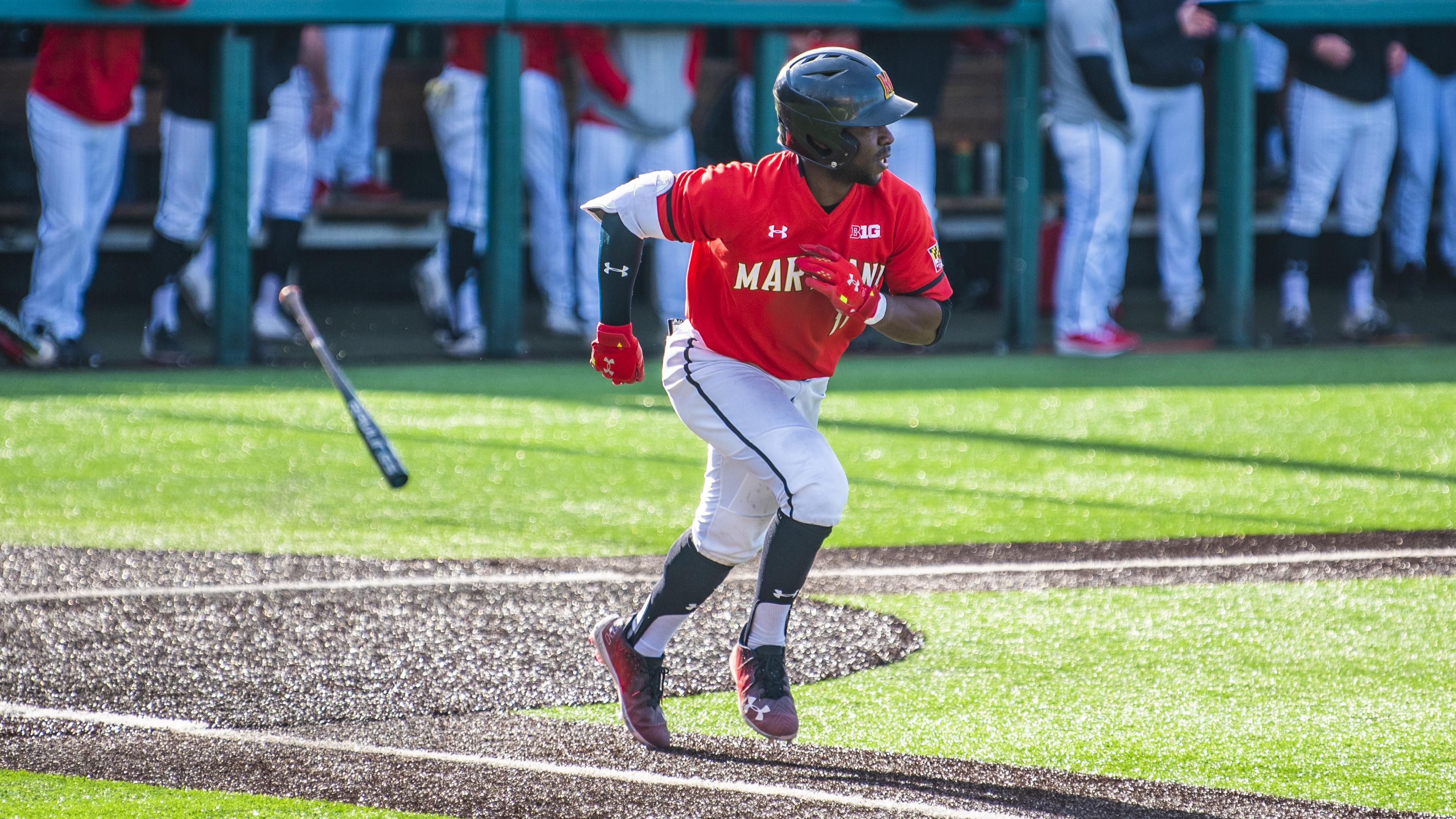 Outfielder Chris Alleyne charges up the first base line during Maryland baseball's 8-7 loss to Rutgers on March 13, 2021. (Eric Harkleroad/The Diamondback)

Ice cold is how Iowa and Maryland baseball came off at the plate. With the moon rising late, the Hawkeyes and Terps couldn’t stop clearing the fence.

But for all the offensive fireworks, it was the Hawkeyes who were the timelier of the two sides. Zeb Adreon smashed a ninth-inning home run to lift Iowa over the Terps, 6-4 on Saturday night.

From the first pitch to cross home plate, it seemed Sean Burke wasn’t going to make it easy for Iowa to put anything on the board.

“That’s the best start [Burke] has given us all year,” coach Rob Vaughn said.

After retiring Iowa’s starting trio of batters in order in the first two innings, Burke had already attained four strikeouts in only six batters.

Maryland didn’t find any success at the plate either, with Iowa pitcher Drew Irvine doing the same as Burke excluding a Benjamin Cowles double in the second.

In the third, Iowa managed its first hit of the day from a triple down the right field line, but couldn’t plate a run.

Both teams had put runners in scoring position early and both walked away with nothing to show for it.

With a formidable pitching duel defining the game through 3 innings, the Hawkeyes needed a boost to screech ahead.

Burke wound up, Ben Norman pulled back and swung. The ball went back, back, and cleared the wall before falling back in play. Maryland had fallen behind 1-0 in the fourth.

For Iowa, that’s all it took to start having success at the plate. For the Terps, it was an unsightly outing with the bat, outside of Benjamin Cowles’ double in the second. Despite the newfound offense, neither team was stringing together anything spectacular.

Burke upped his total to nine strikeouts in five innings in an outing where he got little support . With each passing inning, the Terps seemed to be hammering a monotonous trend that saw them nowhere close to equalizing with the Hawkeyes.

The sixth inning saw Iowa digging a deeper hole for the Terps to climb out of. After a Norman strikeout, Matthew Sosa reached first on a passed ball and Iowa quickly advanced him to third with a momentous double by Peyton Williams.

Sosa would cross home on a groundout by Tyler Snep, and Maryland faced a seemingly impossible 2-0 hole.

With a Randy Bednar single and a Maxwell Costes walk in the bottom of the sixth, the Terps had the tools to take the lead. Cowles was up at plate.

And Cowles had just the right timing.

The pop-up by Cowles to center field lost every Hawkeye outfielder in the sunlight and fell to the ground in a race against time to home plate. With Bednar having already scored and Maxwell Costes heading frantically home, Maryland had the tying run.

“First time all-year we caught some luck,” Vaughn said. “Their second baseman wanted no part of catching [Cowles’ fly-ball] and we end up scoring two.”

With a chest-first slide, a safe signal and an excited Costes heading to the dugout, the Terps had a shot with a 2-2 stalemate.

After Sam Bello relieved a spent Burke, he retired the Hawkeyes in order and helped the Terps to the plate again.

This time, unexpected heroes would step in.

Matt Orlando led off at the plate with minimal expectations in the seventh, given the sophomore had only three hits on the season and a 0.103 batting average. He had only been on base six times all season.

Nevertheless, a hard hit off the end of Orlando’s bat sent the ball screaming toward the left field fence and out. He claimed a 3-2 Maryland lead in a hard-fought game.

With the home run gates torn off, Iowa’s Peyton Williams hit a two-out, two-RBI home run out of the park and Maryland’s Bednar would follow up with a solo home run to center at the Terps’ next at-bat.

With the game tied 4-4 heading into the final inning, neither team was going out quietly.

Iowa was up first and Bello spotted two outs sandwiched between a double for closer Ryan Ramsey. He needed just one out to end the inning tied.

Adreon smashed a devastating two-RBI home run sending the score to 6-4. Once Adreon reached home, he clanged helmets with his teammates in clear elation.

“It’s a difficult thing to do [closing the game],” Sean Burke said. “You’re thrown into the fire there but it’s something [Ramsey] has done over and over.”

Maryland stopped the bleeding with a fly-out on the next at-bat and needed three runs to end the night victorious.

For Maryland, they had the runners, but it wasn’t enough. Chris Alleyne grounded out with Ott and Orlando on and the Terps fell to the Hawkeyes 6-4.

“Long day tomorrow playing two nine-inning [games]…got to lock in and try to go out and we’re going to empty the tank,” Vaughn said.