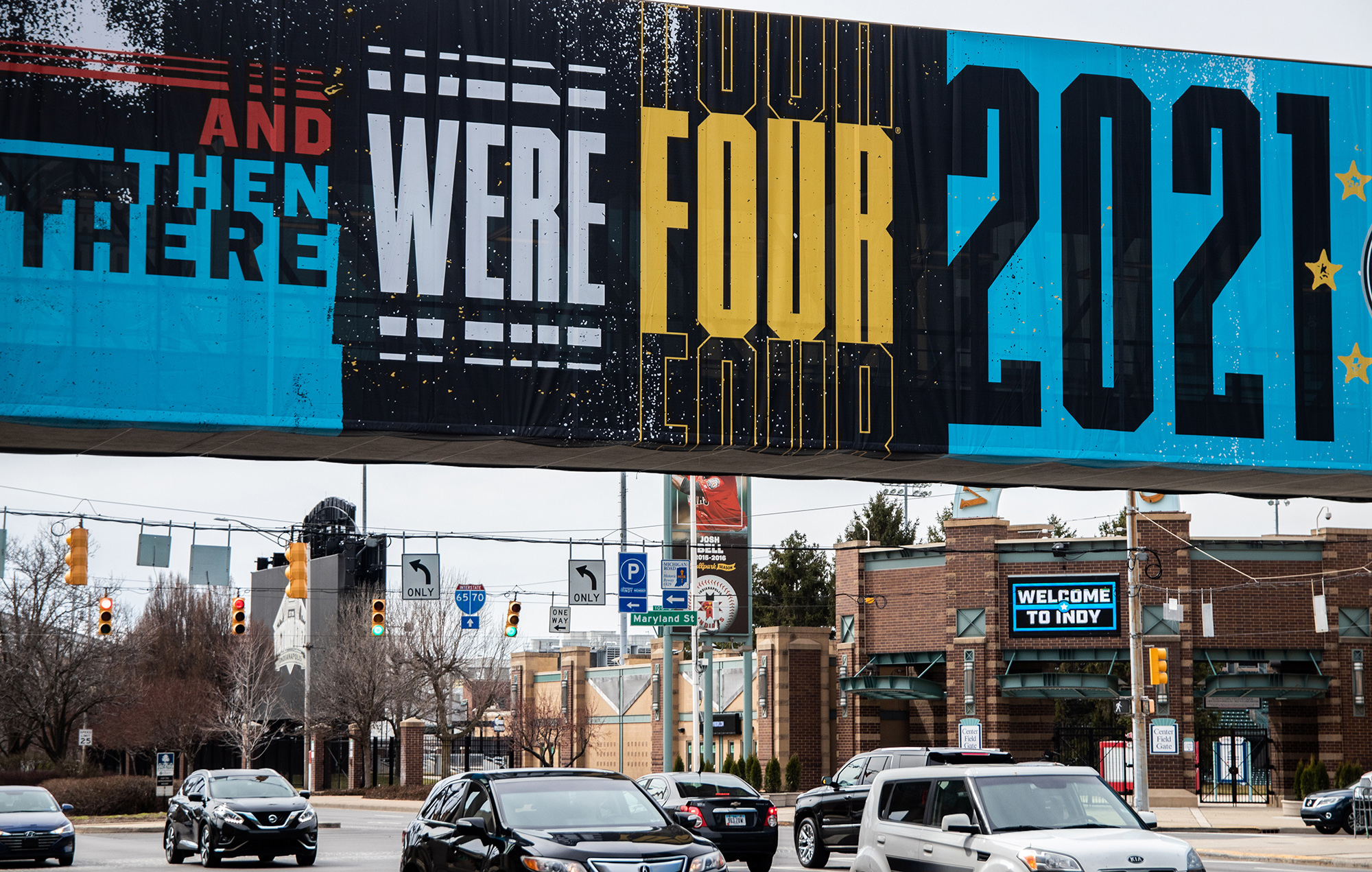 A March Madness sign outside of the JW Marriott Indianapolis hotel on March 13, 2021. (Julia Nikhinson/The Diamondback)

A Maryland legislator who backed a bill to enact state-level protections for athletes “exploited” by higher education institutions is calling on Congress to do the same nationwide at the onset of the NCAA Division I basketball tournaments.

The National Collegiate Athletic Association, a nonprofit organization that administers intercollegiate athletics, has strict rules barring athletes from receiving most types of income related to their sport, including compensation for endorsing a product. The NCAA has been considering opening those rules, but the effort has stalled amid anti-trust scrutiny by the Justice Department.

Maryland is close to joining a small but growing number of states who have passed name, image and likeness laws; cross-filed bills in the state Senate and House of Delegates both passed their third readings in their respective chambers earlier this month.

Lierman said in an interview she hopes Congress will see the state-level action and feel compelled to act.

“The ultimate goal should be to make sure that every college student athlete in America has, minimally, the same rights to use their own name, image and likeness to earn income,” Lierman said.

The Maryland legislation is named in honor of Jordan McNair, a former University of Maryland football player who died after a heatstroke during a team workout in 2018. The bill also includes mandates for athletic programs to implement “guidelines to prevent, assess and treat serious sports-related conditions” such as heat illness.

Marty McNair, Jordan McNair’s father, added his voice to Lierman’s statement calling for athletes to be able to profit off of their names, images, and likenesses. In an interview, McNair said he thought of the NCAA as a sort of all-powerful “Oz-like entity” for a long time. McNair said that more and more people are realizing that even the NCAA has to obey state laws.

“I applaud the state of Maryland’s perseverance and fortitude to keep our student athletes safe and protected as well as educate them on their self-worth and value while playing sports at its higher level collegiate institutions. I sincerely hope other states continue to follow Maryland’s lead,” McNair said in the press release.

The push for national change comes as some college basketball players pushed for reforms on social media under the hashtag #NotNCAAProperty. One was Darryl Morsell, a player on this university’s team, who in a tweet wrote “OUR VOICES WILL BE HEARD #NotNCAAProperty.”

OUR VOICES WILL BE HEARD. #NotNCAAProperty

Between school and sports, players don’t have time to earn money on the side from a job, said Kareem Montgomery, who played as a defensive back for this university’s football team while he earned his master’s degree in supply chain management. Meanwhile, schools profit from deals with brands such as Nike.

“NCAA college sports  — it’s a business,” said Montgomery. “They don’t get huge TV contracts for no reason,” he said. “Universities are invested in it … the NCAA is obviously invested in it. So everything else is a business until it hits the players and that shouldn’t be the case.”