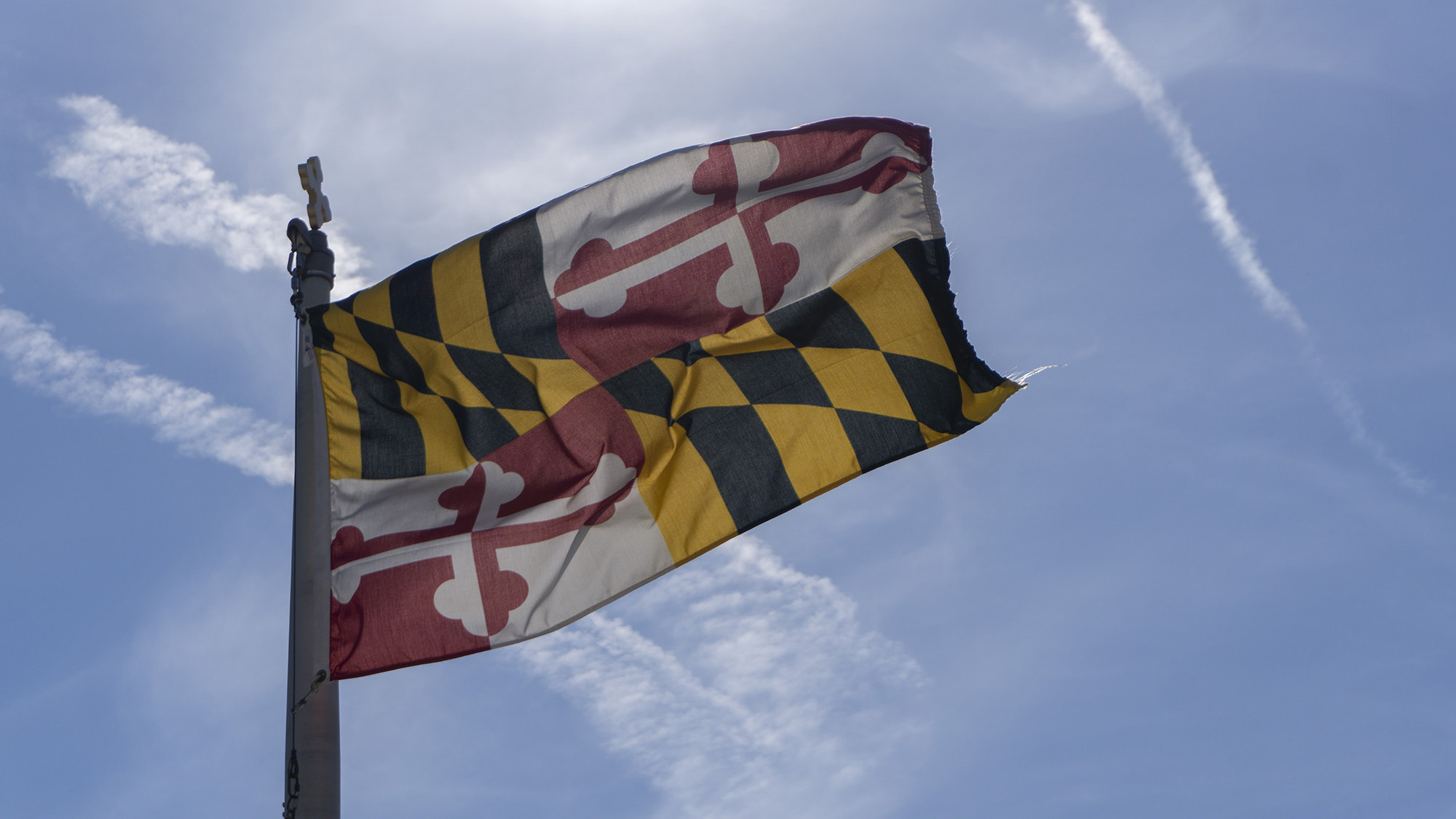 The Maryland Flag on top of the Stadium Drive Garage on March 10, 2021. (Taneen Momeni/The Diamondback)

Maryland state senators heard testimony Thursday on a bill that would repeal the state’s official song, whose Civil War-era lyrics call on Marylanders to join the Confederacy.

Those testifying in favor of the bill, including a former and current state archivist, said that a song that sides with the pro-slavery cause of the past should not be enshrined nor sung today. Two leaders of the state’s Sons of Confederate Veterans chapter opposed the legislation at Thursday’s hearing, slamming the push to strike the song as an attempt to erase a part of Maryland history.

“Maryland, My Maryland” was adopted from a poem written by James Ryder Randall and is set to the tune of “O Tannenbaum.” Its lyrics urge the people of Maryland to fight against the “Northern scum,” led by the “tyrant” and “despot” President Abraham Lincoln.

Sen. Cheryl Kagan (D-Montgomery), the bill’s sponsor, said that this year was her third attempt to repeal the song. Many of her predecessors tried and failed for years to do the same.

Kagan pushed for lawmakers to move the bill forward with speed given recent events, including the police killings of George Floyd and Breonna Taylor and the Jan. 6 attack on the U.S. Capitol.

“This is not a new issue nor is it complicated,” Kagan said at the hearing. “We must repeal Maryland’s offensive, Confederate-themed state song.”

The University of Maryland’s marching band stopped playing it in 2017, after the white supremacist rally in Charlottesville, Virginia, where one woman died.

Edward Papenfuse, who spent nearly four decades as the Maryland State Archivist before he left the role in 2013, said the riot at the Capitol should make it clear why Randall’s song should not hold a place of honor.

“If those who violently stormed the U.S. Capitol on Jan. 6, 2021, had wished to rapturize their efforts in a poem and place it to music, they could not do better than James Ryder Randall did with what is now our state song, ‘Maryland, My Maryland,’” he said at the hearing.

At the hearing, Papenfuse read from a letter written by Randall in 1884, in which the poet described feeling inspired after reading a newspaper account of Maryland Confederate sympathizers attacking Union soldiers passing through Baltimore.

“This account excited me greatly. I had long been absent from my native city, and the startling event there inflamed my mind that night,” Randall wrote.

Tim Baker, the current state archivist, said that one of his official responsibilities is to evaluate and make recommendations on matters like this. A state song is more than just a historical relic — it’s a statement of values, he said, his voice welling with emotion.

“Symbols and designations are profoundly meaningful. Not only do they help define who we are, they signal to the world what matters to us,” he said.

Two people, both members of the Maryland chapter of Sons of Confederate Veterans, testified against removing the song. They denounced the legislation as harmful to the passing on of knowledge about a painful yet important time in the state’s past.

John Zebelean, the organization’s adjutant, which names its leadership roles after military titles, said the song wasn’t about slavery; the call for Marylanders to join the Confederate cause stemmed from Lincoln’s unjust treatment of the state and its people, Zebelean said.

“There’s not a racist word in it. It speaks of despotism, and ‘despot’ fits Mr. Lincoln’s administration,” he said, speaking of the president’s 1861 decision to suspend habeas corpus in Maryland. “I urge this committee to resist the temptation to obliterate more of Maryland’s historical past.”

Like Kagan, Thursday’s committee hearing was not Papenfuse’s first time arguing on behalf of scrapping the song. He hoped this year, lawmakers would see it through.

“It is time to put ‘Maryland, My Maryland’ back on the shelves of the archives,” he said, “there to be interpreted as an artifact of a past, that I fervently hope — fervently hope — is behind us.”