Sanya Glauber leads Maryland gymnastics to a 195.65 at the Big Ten championships 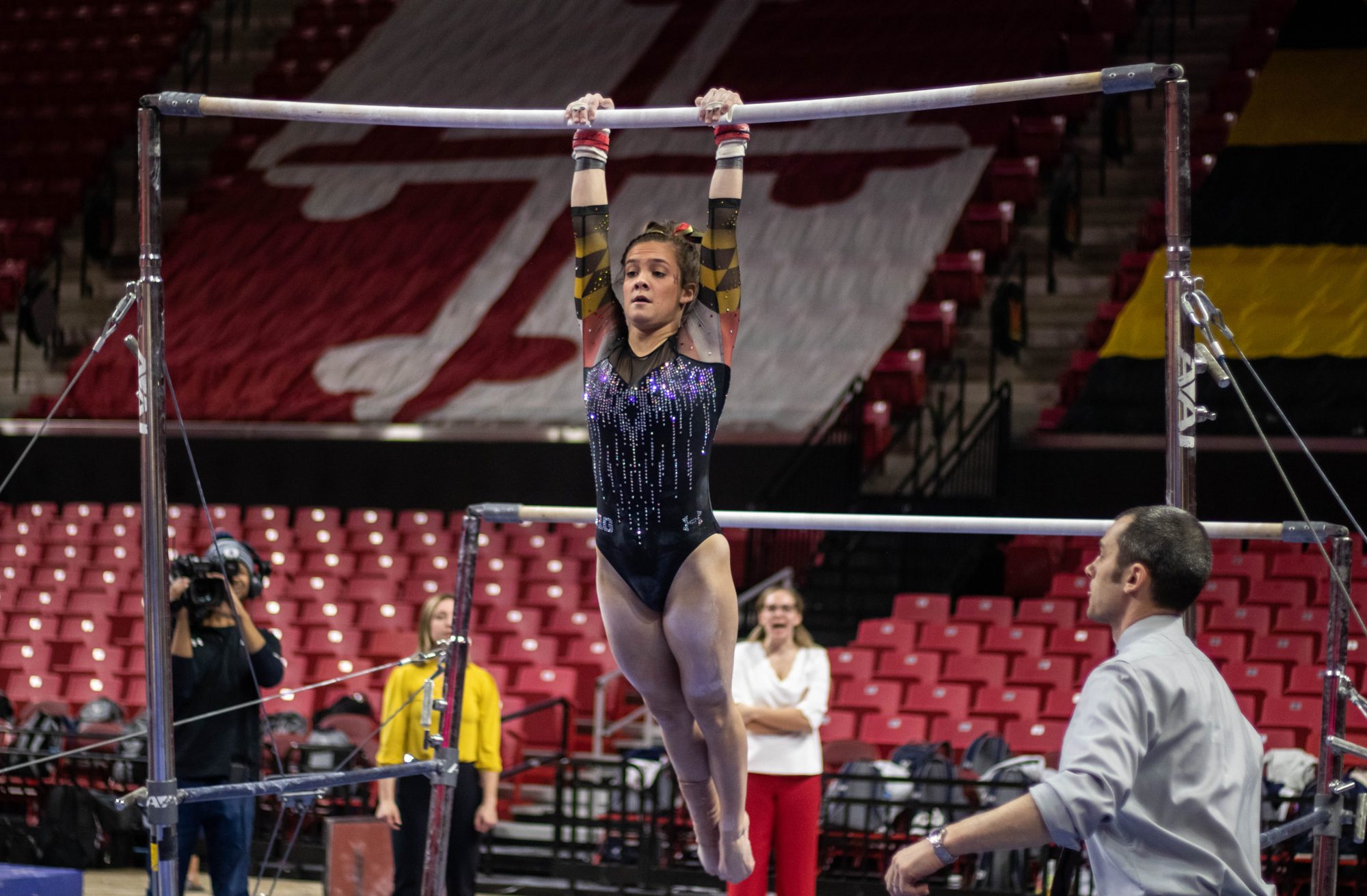 It had been another impressive routine for junior Sanya Glauber, Maryland gymnastics’ ace of sorts on bars in recent weeks. Now, all that was left was the dismount.

Glauber sank from the apparatus smoothly, thrice flipping through the air as she descended. When she landed, she dug her toes into the mat. She turned toward the judges and beamed. Then, pandemonium. Coach Brett Nelligan yelled, as did Glauber herself.

The Mission Viejo, California, native had grabbed herself a 9.85 score. Glauber’s stick and finish set the stage for a fruitful outing for the Terps, who overcame some mid-meet jitters to post a solid 195.65 in the Big Ten championships Saturday afternoon.

“I told her today ‘Look at that. One of your best routines at the Big Ten championship,’” Nelligan said. “She worked so hard to get right here.”

Freshman Tayler Osterhout started the afternoon for Nelligan’s squad on the uneven bars. Osterhout, a rising force in Maryland’s lineups in recent weeks, continued to shine. With a strong routine and a smooth dismount, Osterhout cruised to a 9.80. Glauber was next up, hoping to continue her resurgence after some early-season injury woes.

She did just that, securing her third score of at least 9.80 on the apparatus in the last four meets. Senior Audrey Barber added to the hysterics, posting a 9.825 as the Terps tallied a 48.875 on the bars.

Beam proved a point of frustration in last week’s clash with then-No. 4 Michigan, as Maryland sulked to a season-low 48.25 on the apparatus. And Saturday’s showing was only slightly better. Barber led the way, calmly pirouetting through the sky en route to a 9.85 score.

But that was as good as it would get for Nelligan’s squad on the four-inch-wide platform. Wobbles and small hops scuppered the Terps’ team score. Freshman Sophia LeBlanc and senior Sabriyya Rouse put up a respectable 9.775 and 9.750, respectively.

But lacking that extra sharpness, Maryland fell well short of its season-high 49.

Floor offered a reprieve for the Terps. Maryland has hit a 49 or better in the event in all but two meets this season. And with the lights at their brightest on Saturday afternoon, Nelligan’s squad looked right at home.

The usual suspects showed off their consistency once more for the Terps, with seniors Barber, Rouse and Collea Burgess each dancing their way to at least a 9.80. Newcomer LeBlanc was similarly dynamic, soaring from end to end with ease. LeBlanc notched a 9.80 of her own as Maryland rallied to put up a 49.025 team score on the apparatus.

[Maryland gymnastics notches a 195.05 at Senior Night, despite stumbles on beam, floor]

Bursting with confidence from their floor showing, the Terps saved their best for last. Maryland entered the conference championships with the No. 16 vault unit in the country. It showed as much in Minneapolis, racking up stick after stick with vigor.

Glauber, Burgess and sophomore Reese McClure all hit at least 9.80. Junior Alexsis Rubio took it one further, adding a season-high 9.90. And freshman Samantha Gilbert enjoyed the best day of her young career, besting last week’s 9.80 with a 9.85.

After some early-season struggles, it seems Gilbert is establishing herself as a key part of Maryland’s present and future, a welcome sign for Nelligan and his staff.

Gilbert’s showing culminated in a 49.225 on the apparatus, falling just short of the Terps’ season high. And that led to Maryland’s fourth-highest team score of the season, good for second place in its group.

Now, Maryland waits again: this time, to see which gym it will head to for NCAA Regionals.