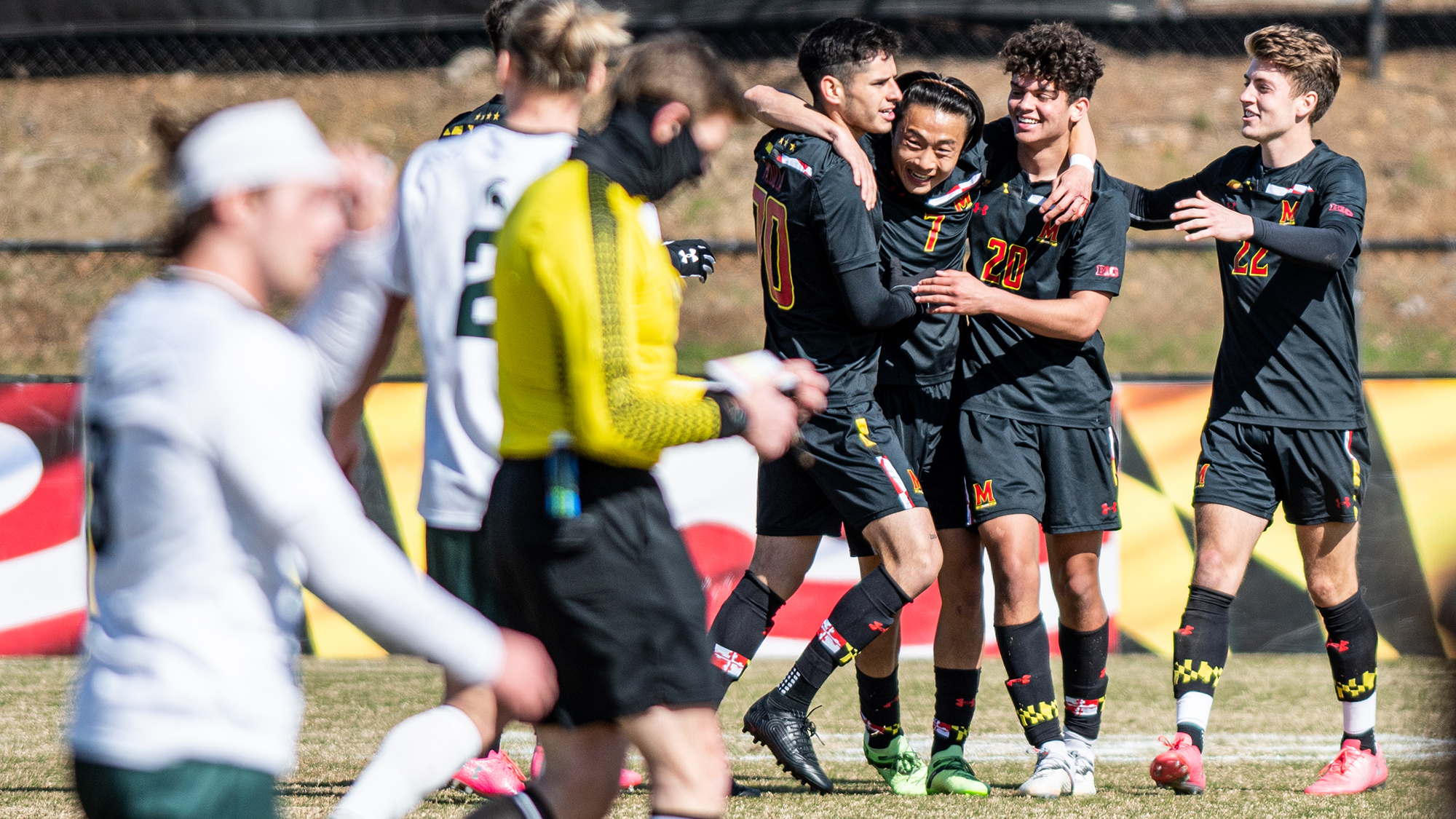 Just under a minute into the second half, Eric Matzelevitch slotted a ball into the box for Paul Bin, a promising look for Maryland men’s soccer’s redshirt senior captain. But Michigan State defender Nick Stone got in the way, tripping Bin up and leaving Maryland with a penalty.

Bin sent the penalty kick hard and low, which Michigan State goalkeeper Hunter Morse couldn’t stop, allowing Bin his second goal of the season and his first at Ludwig since his 2019 injury.

And Bin didn’t stop there. About 30 minutes later, he drove down the middle of the pitch, getting on the end of a Chris Rindov through pass. With only Morse to beat, he rifled a shot into the back of the net. Bin’s aggressive attack defined the second half for the Terps and their eventual 2-1 victory over Michigan State on Friday.

The Terps, who came into Friday afternoon’s matchup missing several players due to injury, were knocked back yet again only eight minutes into the game, when leading goal-scorer Jacen Russell-Rowe went off with an injury.

The freshman forward went down during a grapple off a low corner to the front post, and coach Sasho Cirovski sent Matzelevitch on in his place.

The senior forward entered Friday with just eight minutes of game time under his belt, struggling to build any sort of match fitness. He looked rusty to start, sending his first touch right into a Spartans defender’s path.

But Cirovski’s squad recovered. With Russell-Rowe off, midfielders Ben Bender and Justin Harris pushed up the pitch. Michigan State’s defense was resolute, closing down space and giving the Terps’ attackers few options.

But there were chances. Bender flicked a header wide. Seven minutes later, he whipped a shot straight into Morse’s grasp.

It seemed Maryland was taking control of the game, limiting the Spartans’ chances while enjoying more possession up the pitch. Forward Brayan Padilla came on at the 30-minute mark, hoping to conjure a little magic with his left foot. And just five minutes before halftime, it seemed he had done just that.

The El Paso, Texas, native whipped a free kick right onto defender Rindov’s dish, who nodded the ball toward the top left corner. It struck the post, though, denying Rindov his first career goal and sending the teams into halftime 0-0.

The second half saw a stronger attacking presence from Michigan State side, which registered its first shot of the game three minutes into the new frame. Midfielder Jack Beck gave it its second close after, rocketing a shot just over the crossbar from just outside the 18-yard box.

[After a shutout, Maryland men’s soccer is relying on its defense for future success]

The Spartans created several dangerous moments in the second half, testing the Terps’ young back line repeatedly. For the most part, Brett St. Martin and his squad were equal to the challenge, limiting Michigan State to just four shots.

And with Bin, the Terps always had an attacking outlet. He bookended Maryland’s impressive second-half display, scoring in the 46th and 76th minutes to push Cirovski’s side out in front.

A 90th-minute strike from forward Gianni Ferri made things interesting, narrowing the Terps’ lead to one with only seconds left in the game.

But the Spartans couldn’t find an equalizer, unable to recover from Bin’s second-half showcase. The senior led from the front, helping Maryland take advantage of some gaps in Michigan State’s defense.

And with Bin leading the charge, perhaps the Terps can overcome their early-season struggles and push themselves back up the Big Ten ladder.