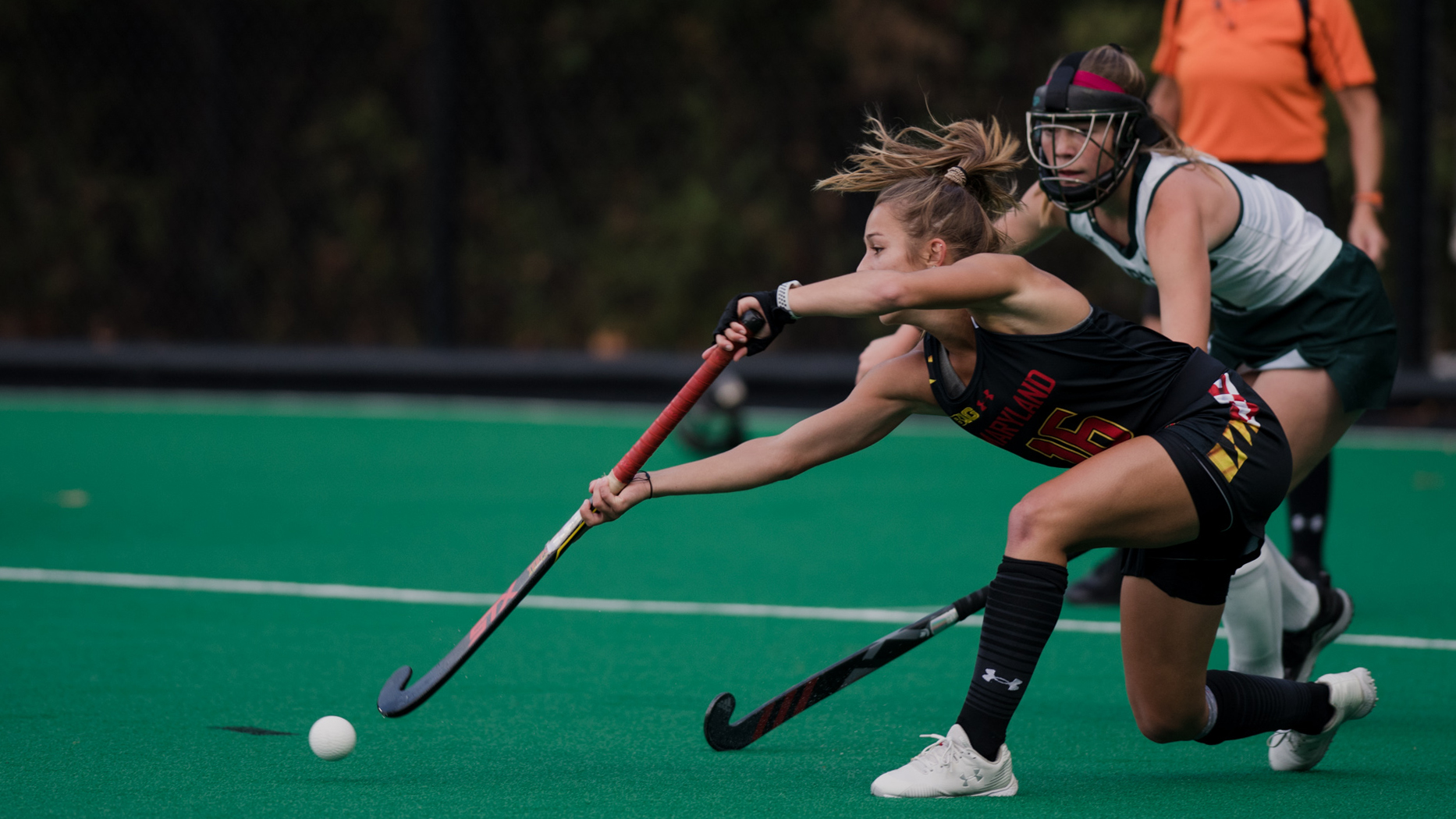 With just over two minutes left in Sunday afternoon’s match, Emma DeBerdine received a pass as Maryland field hockey’s attack charged downfield. The sophomore was in traffic, and had three Penn State defenders around her.

She saw a wide-open Bibi Donraadt dashing toward the cage and dished the ball over. The junior forward flipped the ball right past goalkeeper Brie Barraco and raised her right arm in celebration immediately.

“Gaps opened up in the field everywhere,” Donraadt said. “Emma did a great job pulling the defenders toward her, and because of that, the ball was deflected, and I was there.”

They had zero penalty corners through the first 57 minutes. They were outshot by nine. But as coach Missy Meharg has talked about, the Terps needed to score more goals, and their highest goal total this year gave them a big win over a quality opponent that shut them out two days ago.

“We were, first of all, just fired up,” Donraadt said. “Penn State-Maryland is always a big deal. We played some great segments of hockey.”

Maryland (3-3) was coming off a two-game skid, as it dropped its second match Northwestern last Sunday and was blanked by Penn State (2-3) on Friday. Its last win came March 5 against Ohio State, when strong defense and goals in the first and final minutes lifted it to a shutout victory.

Since that win, it hadn’t scored a first-period goal. Until Sunday.

Just under four minutes into the match, Maura Verleg dragged in a pass toward the cage from the center. Forward Bibi Donraadt was there to send the ball into the back of the net past goalkeeper Brie Barraco, who handled all seven of the Terps’ shots on goal Friday.

“[Barraco] comes really low,” Donraadt said. “So we knew to react quick, like what I did with the first goal.”

And they didn’t stop there. After being held scoreless 48 hours earlier, the Terps had already broken through on Barraco — and their offense just kept rolling.

Maryland’s attack continued to pressure the goalie. Forward Mayv Clune fired several shots toward her, but couldn’t connect. Eventually, midfielder Emma DeBerdine saw an opening and the sophomore knocked in her first goal of the season.

“We’ve also worked on really staying present,” Meharg said. “Forget the score. You need to take care of one time, one chance.”

The Terps defended their lead, taking five shots on goal by late in the second period. But Penn State’s offense, led by Anna Simon — who scored a goal and picked up an assist Friday — wasn’t going to stay silent for too long.

Twenty minutes into the match, Bree Bednarski headed to the backline to insert the Nittany Lions’ second penalty corner of the afternoon. Elena Vos set up a shot for Simon, who sent it past a diving Noelle Frost. Penn State was on the board, cutting the Terps’ lead in half.

[Back from an injury, Kyler Greenwalt is powering Maryland field hockey’s attack]

Despite Maryland’s lead on the scoreboard, it didn’t earn a single penalty corner for the entire first half. Meanwhile, the Nittany Lions had five, along with 12 total shots.

About six minutes after the Simon goal, Bednarski lunged toward the ball after it was deflected. She took a half-step in front of her defender and dragged a shot toward the cage. As the senior forward fell to the pitch, she watched her shot sail past Frost — knotting the match at two.

And the teams remained tied until halftime, with the Terps matching their highest score of the season coming before the second period had even started.

“The attack was opportunistic,” Meharg said. “The piece that made it so much easier for us just to be opportunistic was the level of support from the midfield.”

Seven minutes into the second half, Maryland tried to get its offense going again. It still had yet to draw a penalty corner, and was being outshot, 14-6. And its commanding 2-0 lead had already been shattered.

Emma DeBerdine was looking for her second goal of the match, but Penn State’s strong defense again kept the Terps away from the cage and quickly went back to pressuring Frost.

The action quieted down in the third quarter. Defenses began to shine again, and Maryland still had not drawn a single penalty corner.

With just over six minutes left, Penn State drew its eighth penalty corner of the match. The Nittany Lions worked the ball to Simon, whose shot was blocked — and the second half stalemate continued.

Nearly fifty-seven minutes into the match, the Terps drew their first penalty corner. Bibi Donraadt headed to the backline for the insertion, and the ensuing shot by Riley Donnelly was handled by Barraco.

And in the 58th, the breakthrough came. Though Maryland had been outshot, Donraadt snagged the winner, scoring the only goal in an otherwise tight second half. And it was all the Terps would need to get their revenge after being shutout Friday.

“They didn’t care that they had given up the two goals and it was 2-2,” Meharg said. “They just kept playing. And I’m really proud of them for that.”