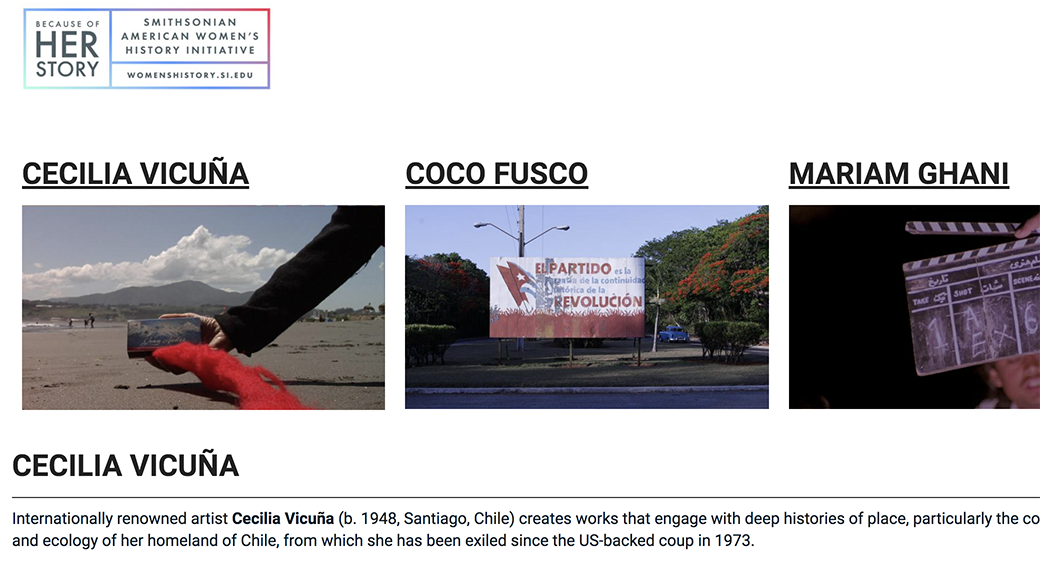 Women’s History Month is a time to reflect on women’s triumphs across career fields, particularly in the arts. According to the National Endowment for the Arts, women comprise 51 percent of visual artists. However, their work only makes up three to five percent of major permanent collections in the United States and Europe.

The film industry presents its own challenges, and the Smithsonian American Art Museum is celebrating the women who have navigated them. This month, the third annual Women Filmmakers Festival is honoring their accomplishments. The all-virtual event is part of the Smithsonian American Women’s History Initiative, “Because of Her Story,” which focuses on elevating the history of American women’s successes.

This year’s festival revolves around the theme “Her History Lessons.” The films focus on past events that address present-day challenges that have persisted over the course of generations. From climate change to political activism and global health, all of the filmmakers offer criticism of current events through their portrayals of history.

[What ever happened to the Lettuce Club?]

A different filmmaker is featured online each week, and attendees can watch their “screening” starting on Mondays. A question-and-answer session is offered on Wednesdays for viewers to hear from the artist and Smithsonian curators about their work.

According to the museum, the three selected filmmakers are not just unique because of their films’ content or female identity. They work “outside the Hollywood game.” Hollywood is not known for being the most hospitable environment for female directors. These three have navigated outside the set boundaries in order to pursue their film inspirations and create meaningful work.

Vicuña is a poet and artist based in New York and Chile. Her two shorts, Semiya (Seed Song) (2015) and Un nudo vivo/A Living Knot (2017,) were the first features in the festival. Both works portrayed the relationship fostered between humans and their surrounding environment through rituals. Vicuña’s work is deeply, artistically connected to Chile, her home country. At the festival, she shared how her childhood taught her that humans and animals were not separate beings, but instinctively connected.

“We were learning from the animals, from the insects, from the birds, they were our friends … Their beauty and their behavior has taught human beings for three million years,” Vicuña said.

Vicuña even got teary-eyed when discussing the educational power nature holds.

She stressed the dangers of losing the educational resources within nature and that humans are harmed by its rapid disappearance. Disturbances to nature such as extinction are unfortunately not new, but her work is a reminder of its sacredness in the face of present-day issues, such as climate change.

Fusco, an award-winning writer and artist, focuses on Angela Davis in a/k/a Mrs. George Gilbert (2004). Her work explores how identity and race played a role in the FBI’s hunt to identify Davis.

Photography was also critical in efforts to try and apprehend Davis. Fusco’s work tied into themes of surveillance and racial profiling that are still relevant today, which she discussed on Wednesday.

[NFTs: what they are, and why they’re revolutionizing digital art]

“The people who were doing the arresting were clearly not looking very carefully at the photographs … when they were arresting other people,” she said. “Out of that comes this story, which is really not just about Angela Davis. It’s about all the other women who were also surveyed … and were thought to be Angela Davis,” she continued.

Fusco’s film La botella al mar de María Elena (2015) is also available for streaming. The film focuses on another activist, Cuban poet María Elena Cruz Varela. It emphasizes the risk of doing that work in Cuba amid political turmoil and personal danger. Fusco’s work is a reminder that debates regarding freedom of speech are not over across the world, especially for artists.

Ghani will be featured next week as the final filmmaker. Her documentary, What We Left Unfinished (2019) follows decades in the Afghan film industry and the complexity of creating art in unstable political conditions.

The week also features her upcoming projects regarding the 1918 influenza pandemic. DIS-EASE clips focusing on themes of illness and invasion will be available for viewing. Her short The Fire Next Time, an exploration into how for centuries epidemics have coincided with social upheaval, will also be posted. All of Ghani’s work will be available March 15 through March 22, and a conversation between her and Smithsonian curators will be held on March 17.