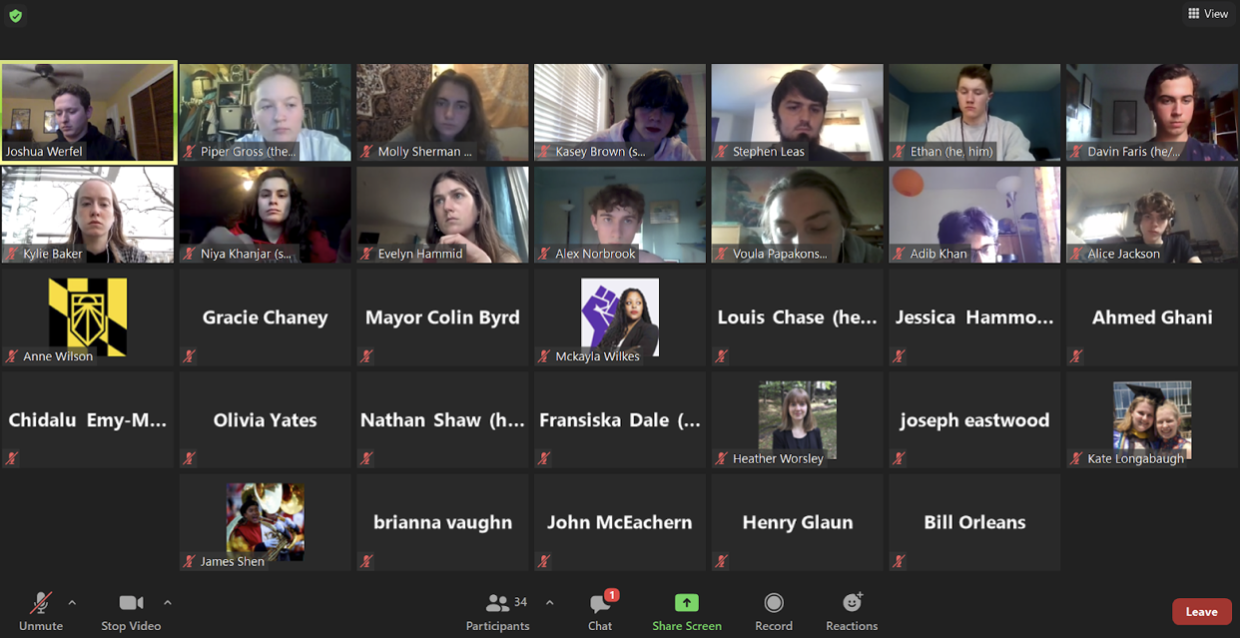 About 30 Maryland climate activists with the Sunrise Movement, including some from the University of Maryland, held a virtual lobbying event Friday, pushing state legislators to pass 17 bills on issues such as criminal justice reform and climate change.

The bills include efforts to limit police officers’ rights and remove them from schools, give essential workers an extra $3 in hazard pay, reinvest in Maryland public transit and remove waste incineration from one of the state’s definitions of renewable energy.

“I hope everyone is as motivated as I am to put the pressure on today and really get the ball rolling,” Niya Khanjar, a sophomore bioengineering major at this university, said in kicking off the event. “As a community, we have so much power, and today is a chance for us to collectively use it for good.”

At the event, activists from 10 Sunrise chapters called and emailed their state representatives, pushing for the bill’s passage. The lobbying day also featured speeches from Greenbelt Mayor Colin Byrd and Mckayla Wilkes, who is running to unseat House of Representatives Majority Leader Steny Hoyer in a race for Maryland’s 5th Congressional District.

“I think it was very successful,” said Josh Werfel, the coordinator for Sunrise at this university. “Another meeting online, it’s hard to get people to attend. So having 30 some-odd people attend and stay for a full hour and a half is a feat in itself.”

At the event, Byrd, Greenbelt’s youngest mayor ever, mentioned the “audacity of progressives” — the idea that big change can’t wait — and pointed to the environment as a pressing example.

“While we no longer have a president who says that climate change is a hoax created by the communists, we are not yet out of the wilderness,” Byrd said. “Right here in Maryland, we have a governor who offers Marylanders seductive lip service about bipartisanship” yet pushes destructive environmental policies, Byrd added.

“[In 2020], we got policy. Albeit, we got bread crumbs when we could’ve gotten the whole cake,” she said. “We cannot be complacent in the breadcrumb. We gotta keep going until we get the whole damn bakery, okay?”

Sunrise Maryland is also pushing for the Environmental Human Rights Amendment, which would enshrine in Maryland’s constitution an inalienable right to clean air, water, land and a stable climate. The state would be responsible for ensuring those rights are not violated.

Ethan McNary, a freshman at Towson University and Sunrise’s state policy organizer, has been involved in drafting the amendment for three years, he said.

Most of the event’s attendees were white, which organizers acknowledged, adding they were working to make Sunrise Maryland more diverse.

“I would hope that in the coalition, we can acknowledge that and address it and think about how we can make this more accessible to more people,” said high school junior Piper Gross, a coordinator for Sunrise Frederick and the political lead for Sunrise Maryland.

Wilkes called on Sunrise organizers to reach out to Black and brown communities and spread awareness about environmental issues.

The lobbying would usually take place in-person, but organizers turned to Zoom this year due to the pandemic. Still, attendees stressed the importance of holding their representatives accountable.