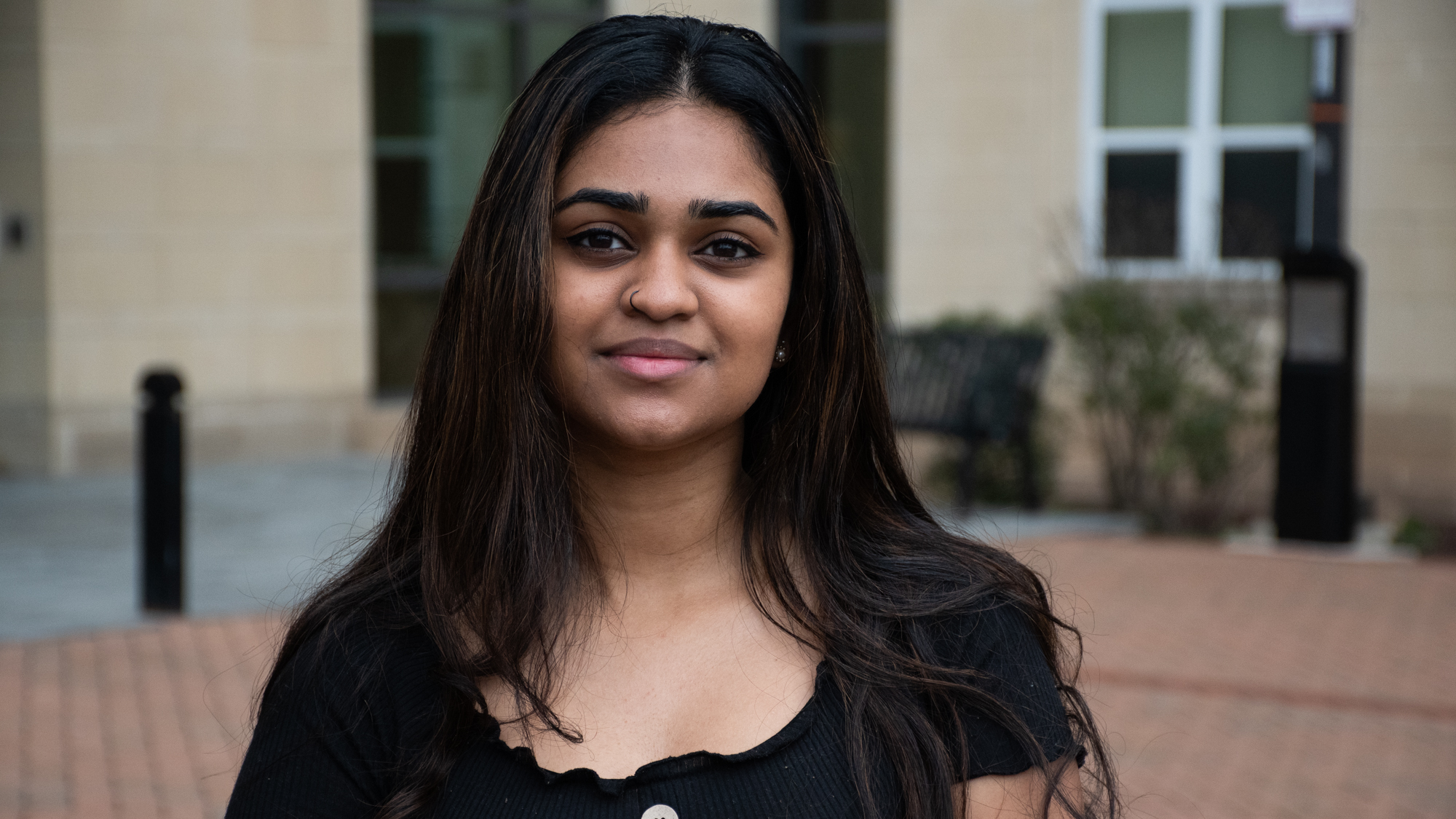 Sophomore Medha Tumku is the president of Anokha, one of UMD's a capella groups. (Freddy Wolfe/The Diamondback)

Gathering in a circle in an empty classroom and singing with friends used to be a weekly part of Medha Tumkur’s life. But the sophomore mechanical engineering major hasn’t done that for over a year. Since the pandemic shut down most in-person activities in March 2020, Tumkur — the president of Anokha, the University of Maryland’s South Asian a cappella group — has been leading rehearsals on Zoom.

Anokha and other a cappella groups at this university have adapted to a virtual setting, forgoing their usual in-person performances and competitions for screen-friendly alternatives.

Although Anokha has made the most of the year, the virtual setting does not lend itself well to a cappella, Tumkur said.

“With a capella, the most important thing you’re trying to go for is a blend of sound,” Tumkur said. “Over Zoom, because you can’t sing together … you just don’t know if you’re blending well.”

Naomi Lichtenstein, the president of PandemoniUM, one of this university’s co-ed a cappella groups, feels the same way.

Singing over Zoom has gotten easier over time, she said, but it does not allow for bonding like in-person rehearsals do.

“We all really miss each other and the fun we have during rehearsals,” said Lichtenstein, a junior environmental science and policy major.

One of Tumkur’s favorite things about Anokha is that it feels like a family, and the group has been trying its best to maintain that connection despite physical distance — especially in welcoming new members, she said.

“All three of our new people — our freshmen — are at home … so we try to just make them feel super-involved in our conversations and do bonding with them as much as we can to onboard them more effectively,” Tumkur said.

Lauren Eng, senior adviser for Ethnobeat, a world music a cappella group, said the virtual environment has brought an unexpected bright spot in terms of socializing with other members.

“We acknowledged pretty early on that we couldn’t practice synchronously … it just wasn’t working, so now instead of weekly rehearsals we have weekly social events where we meet up every week and we just play Zoom games,” the senior information science major said.

Ethnobeat would normally perform at cultural events around the campus, but since those have been canceled, the group has sought out virtual opportunities instead, Eng said. Later this month, they will perform at the Chinese American Museum’s virtual inaugural gala.

Performing has changed for others, too. On Feb. 27, Anokha competed virtually at Jeena, an annual national a cappella competition hosted by the University of Texas’ Indian Students Association. Anokha won first place.

Instead of performing four or five songs in front of a crowd, they submitted just one arrangement to be livestreamed — a mashup of Post Malone’s “Hollywood’s Bleeding” and a Hindi song called “Main Dhoondne Ko Zamaane Mein.” Members recorded themselves singing background vocals and solos, and the group’s music director mixed them into one video, Tumkur said.

Other groups have entirely opted out of virtual competitions. Lichtenstein said PandemoniUM has struggled with funding because of the lack of live performances during the pandemic, an issue that would put them at a disadvantage if they competed with a pre-filmed arrangement.

“We probably won’t compete in another competition until it’s mostly in person just because there’s a lot of discrepancies with virtual competitions,” Lichtenstein said.

The pandemic has provided Eng and others in Ethnobeat with a chance to release their first two pieces of professionally recorded music.

“I’m just really glad that we’ve been able to power through this semester and this whole year. Even though it’s been so different, we were still able to get a lot done,” Eng said.

Lichtenstein agrees. “When people really love something — for us, it’s music and singing together — you’re kind of willing to do anything to make it work,” she said.