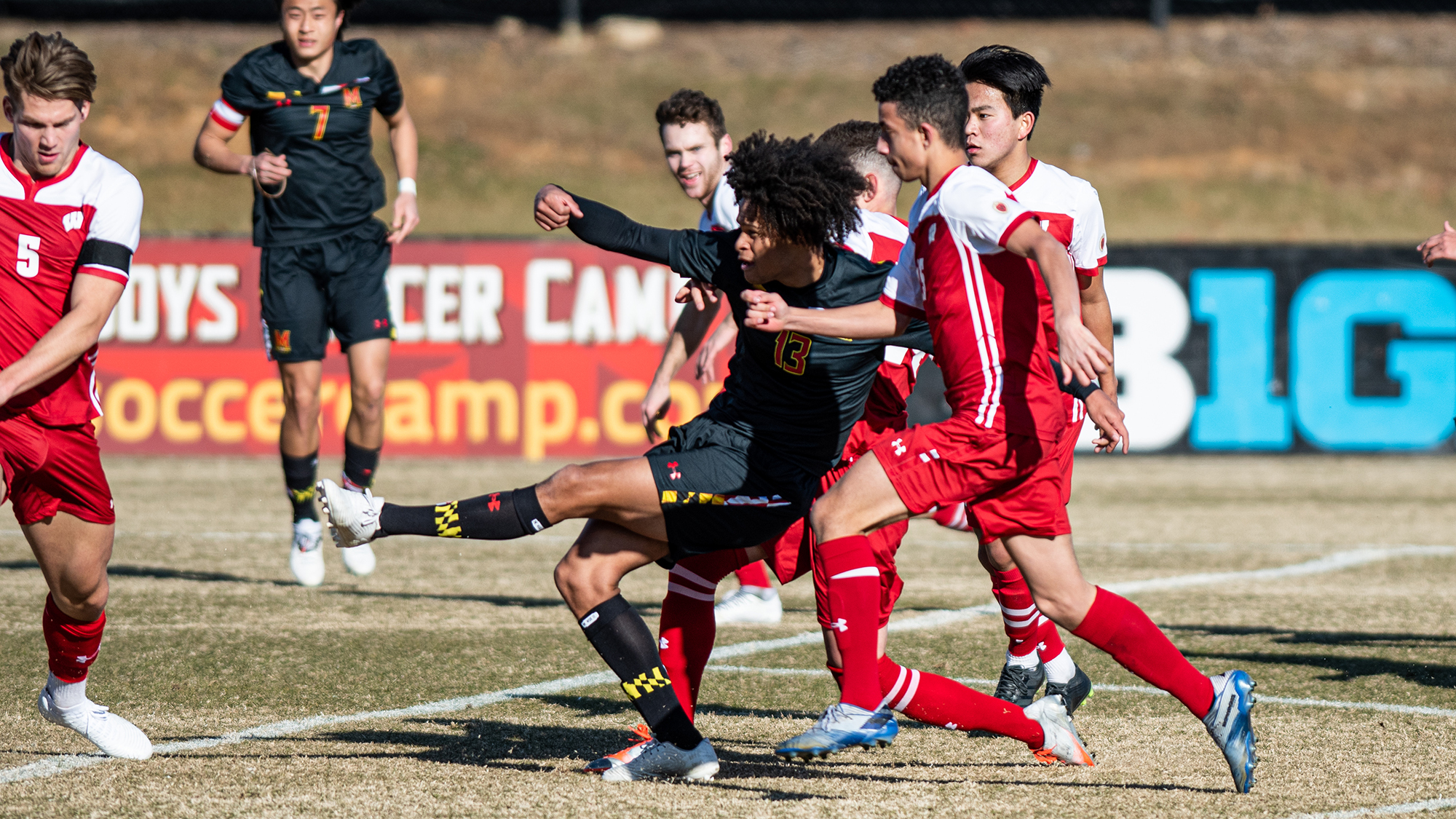 At the start of the second half, Jacen Russell-Rowe was waving his arms in frustration after having a header tipped over the bar.

20 minutes later, he was buried under his Maryland men’s soccer teammates, screaming in delight.

After a frustrating 62 minutes, Russell-Rowe provided a spark in the 63rd. The freshman collected a ball outside the box, cut onto his left foot, and smashed the ball into the top corner from 20 yards, sending the Maryland bench into raptures.

And his strike was enough for the Terps to overcome a scrappy Wisconsin team, winning their first game of the season, 1-0.

“We deserved the goal, for the effort we put in,” coach Sasho Cirovski said.

Russell-Rowe’s game winner served as the difference between two scrappy sides at Ludwig Field Sunday afternoon. Though Maryland had most of the possession, the Badgers made things difficult for them for most of the proceedings. In a game that required a special moment, the freshman provided it.

The Terps established control of the game early on, having a good look early through forward Paul Bin. Russell-Rowe flicked the ball to Mike Heitzmann, who played Bin in on goal — but his shot sailed over the bar.

The Terps didn’t create much else in the opening 15 minutes. Coach Sasho Cirovski toyed around with his system, deploying a 4-4-2 against the Badgers — diverting from the preferred 4-3-3 shape. That shift got Maryland on the ball more, as the home side dictated the tempo in the early proceedings.

[Maryland men’s soccer was derailed by careless mistakes against Rutgers]

“The team was just really excited to be out there and the energy was really high,” center back Brett St. Martin said.

In the 24th minute, Bin went down in the box, and waved his arms for a penalty kick. But referee Mike Stutt waved the shout off, despite the Terps’ protests.

Bin had another look 10 minutes later, heading narrowly over after Ben Bender floated a cross to the back post.

Still, for most of the half, Wisconsin looked a packed, well-drilled unit. Though Maryland enjoyed more of the possession, the Badgers sat in and defended tightly. And for all of their time on the ball, the Terps only managed 10 shots.

The closest they came was from a driven shot off the left foot of Brayan Padilla, who drilled a shot that goalie Sven Kleinhans diverted around the post.

And the two teams were forced to settle for a 0-0 at the half, despite Maryland seeing more of the ball.

“We asked him to be a little more clinical in the final third, and I thought we had a few more threatening chances in the second half,” Cirovski said.

The Terps enjoyed a bright start to the second period, creating an early chance as Russell-Rowe’s header was cooly tipped over the bar by Kleinhans.

But shortly after they shifted into an all too familiar pattern. Ball movement was slow, passes lethargic, runs predictable. After dictating the pace of the game in the first half, midfielder Joe Suchecki seldom saw the ball to start the second. Maryland needed a spark of magic.

And Russell-Rowe provided it. The freshman seized onto a loose ball just outside the box, and curled a shot in for a 1-0 lead.

“I was able to get a nice first touch out, and my first look was to goal,” Russell-Rowe said.

Maryland almost had another moments later, as Padilla unleashed a flying volley that sailed half a yard wide of the net. Bender went closer shortly after, blasting a shot inches over the bar after a flowing counter attack.

And for the rest of the half, the Terps looked a more confident team. It started with Bin, drawing cheers from the Maryland bench after relentlessly pressing the Wisconsin backline. It developed with Richardson, calmly seeing off opposing wingers and spreading the ball around a laboring Badgers side.

A late push from Wisconsin kept the Terps honest. After a few misplaced passes, the Badgers ventured into the final third. But goalie Niklas Neumann was equal to floated crosses to the back post, the German snagging balls out of the air to prevent a late equalizer from the away side.

“We were connected, we’re hard to play against. And when you do that you give yourself a chance to win,” Cirovski said.

It wasn’t the prettiest 90 minutes. But Russell-Rowe’s moment of magic separated the two teams, leaving Maryland good value for its first win of the season.

“When we put that kind of effort in, we got a chance to beat anybody. Because we’ve got players like Jacen Russell-Rowe that can score out of nothing,” Cirovski said.