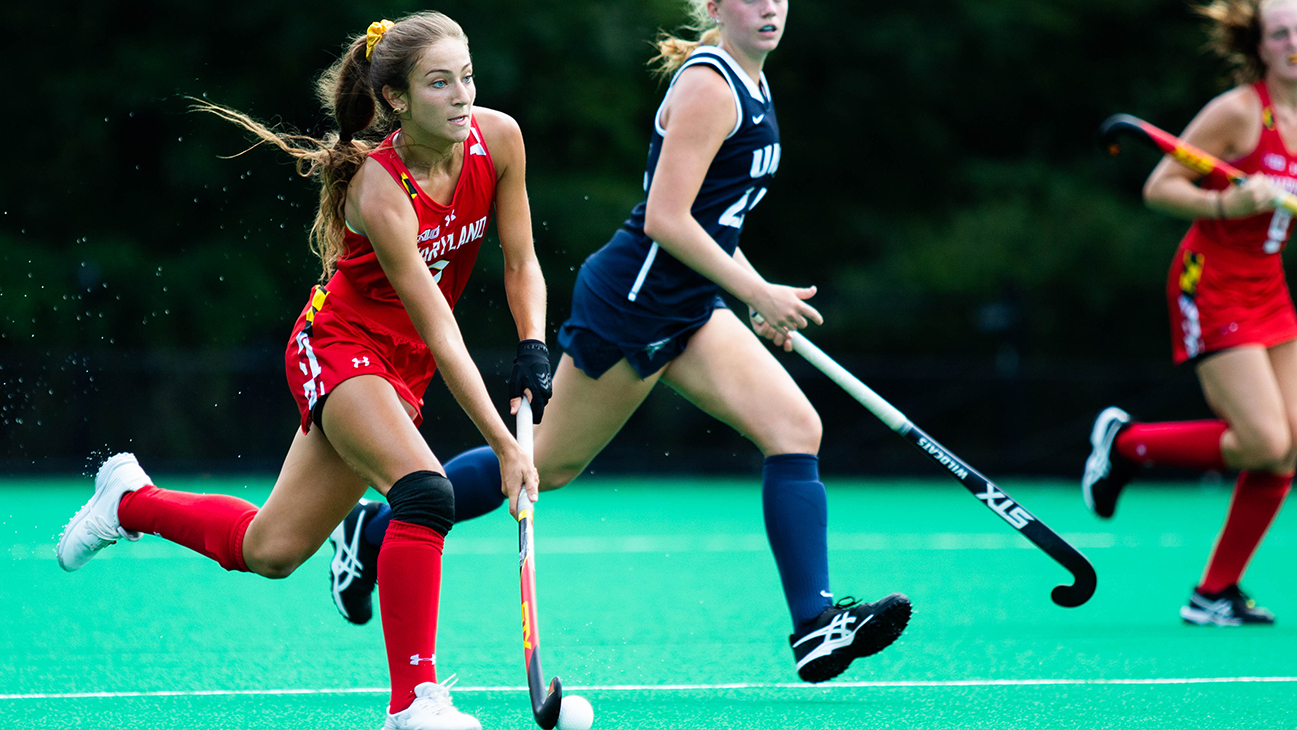 Sam Zywna remembers the Virginia Beach Sportsplex. It was where she was introduced to hockey, and where she first played the sport.

It was where she won middle school, high school and club field hockey championships.

Now a sophomore forward for Maryland field hockey, the Virginia Beach, Virginia, native was ecstatic as the team traveled to her hometown to kick off the truncated spring 2021 campaign.

Late in the first half of Friday’s win over Michigan State, Zywna handled a pass from the Terps’ Riley Donnelly, stepped by her defender and fired a right-handed shot into the cage past Spartans’ goalkeeper Jade Arundell.

Zywna threw her arms in the air in celebration and hugged her excited teammates. She had just scored her first collegiate goal in her hometown.

“To be able to play a collegiate game and score my first goal [there] is just awesome,” Zywna said.

An alumna of Frank W. Cox High School in Virginia Beach — about a 20-minute drive from the sportsplex — Zywna was a four-year letterwinner and two-time state champion for the Falcons’ field hockey team.

Being that close to home meant her friends and family were among the 121 spectators who witnessed her first collegiate goal in person.

“I’m really blessed to have my family there and have a big support system in V.B.,” Zywna said. “I know a lot of people were watching and excited to see me, so that was really cool.”

During her freshman season, Zywna saw action in just eight games. She tallied an assist in a Maryland victory over Towson but didn’t find the cage on two shot attempts.

So, she came into this season having to fight for a spot.

This fall, when Zywna and the Terps were at the Field Hockey and Lacrosse Complex practicing and participating in intrasquad competitions, they were working on technical skills and doing “all the real discipline work,” said coach Missy Meharg.

And in that environment, Zywna thrived.

“Sam grew her game tremendously in the fall,” Meharg said. “She took the game so seriously.”

As Meharg’s squad continued to compete among itself in the fall, there was no clear picture of when it would return to the pitch against other schools. So, it took that time to focus on ways to improve its game, particularly goal scoring — an emphasis that paid off for Zywna.

“To score a goal using that technique was super rewarding — I would hope — for her, and certainly for the coaching staff,” Meharg said.

Zywna will be close to home again this weekend, looking to create more memories as the Terps head down to Virginia Beach for contests against Ohio State and Northwestern.

CORRECTION: Due to a reporting error, a previous version of this article misspelled Sam Zywna’s last name. This story has been updated.