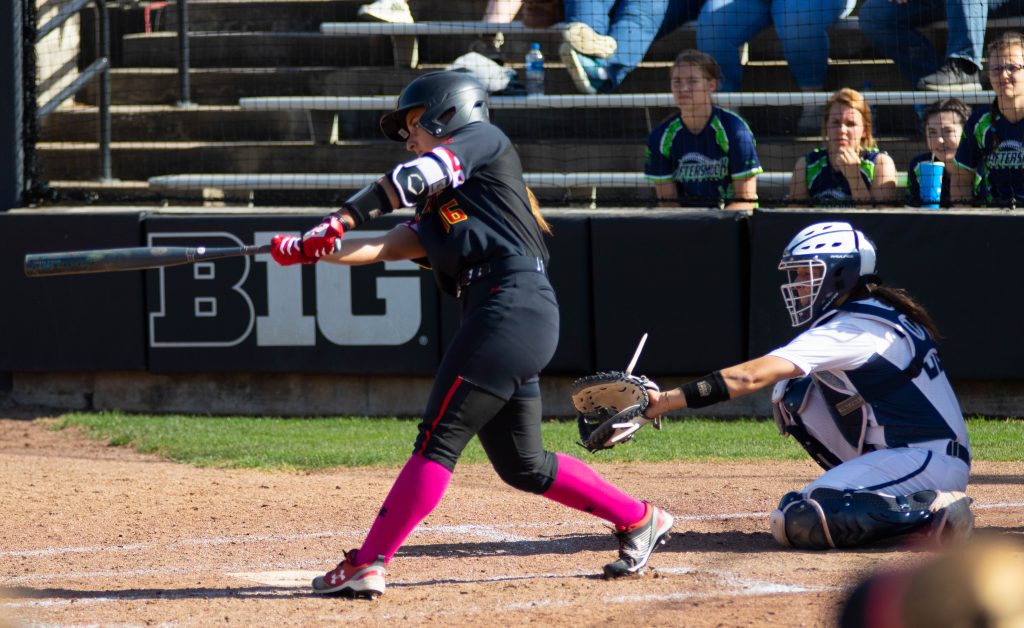 Jaeda McFarland stood just 60 feet away from changing the game. Tied at one with two outs, the freshman needed teammate Taylor Liguori to keep Maryland softball’s scoring chance alive in any way she could.

As it turned out, she got some help.

Minnesota pitcher Autumn Pease fired the ball to home, but it flew past catcher Sara Kinch and to the backstop. That’s when McFarland — who is affectionately called “Air Jaeda” by her teammates — pounced. She scampered home, arriving before Kinch could return from retrieving the wild pitch.

And that was the difference in the second game of a season-opening doubleheader with the No. 24 Golden Gophers, as the Terps eked out a 2-1 win after dropping the opening contest by the same score.

The day’s first game started without much fanfare, each side locking down the opposing offense. The score was tied at zero in the top of the fifth inning, and Minnesota was knocking on the door. Maryland’s Jennifer Brann had shined in the circle for the first four innings, but this frame was in danger of slipping away from her.

And the Golden Gophers capitalized. With runners on second and third, Ellee Jensen smashed the ball through the gap, bringing Sydney Strelow in for the first run of the day. Haley Ellefson then stepped in the circle and got the Terps out of the inning, stranding the bases loaded to limit the damage.

[After a promising start to its 2020 season, Maryland softball is aiming higher in 2021]

Ellefson played stopper once again in the seventh, Minnesota still up 1-0. MaKenna Partain stepped to the plate with Carlie Brandt on third and two outs.

“Don’t give in!” Maryland coach Mark Montgomery screamed from the dugout.

And his squad didn’t.

Partain smashed the ball hard right at Taylor Okada, who promptly threw Partain out at first. And in the bottom of the frame, the Terps had one more at-bat to even the score.

With pinch runners JoJo McRae standing at third and Merissa Borkowski occupying first, Maryland brought out the tricks. Borkowski intentionally danced off first too early, putting herself in a pickle and drawing a throw. That allowed Kline to steal home to tie the game at one — and force extra innings.

But the Gophers quickly quashed the threat in the top of the eighth. Partain stood on third with one out and charged toward the plate. She scored, pushing Minnesota ahead by one.

And that 2-1 result would stand, despite a brief rally attempt from the Terps. McFarland stood in scoring position with one out. But a flyout from Ellefson and a strikeout from Michaela Jones ended the contest, victory escaping Maryland.

Much like the first game, the night’s second contest was a low-scoring affair. The Gophers dented the scoreboard a bit earlier, with a third inning single from Katelyn Kemmetmueller bringing MacKenzie Denson home for a 1-0 Minnesota lead.

[In uncertain times, Maryland softball’s Mark Montgomery is focusing on what he can control]

But once again, the Terps had an answer. McFarland was on third with one out, and Liguori strode to the plate. She pounded the pitch into the ground, but McFarland sped home, knotting the contest at one.

McFarland flashed her speed once more in the bottom of the fourth. Strelow smacked a ball into the left-center field gap, looking all the more certain to strut into second base with a double.

But McFarland had different plans. The freshman darted across the outfield lawn, stretching to reach Strelow’s rapidly descending drive. She dove, hoping to sweep the ball up and deny an extra-base hit.

And when McFarland rose from the turf, the ball firmly in her grasp, her teammates serenaded her with cheers. Another Gophers threat had been averted, all thanks to McFarland and her fleet feet.

And two innings later, McFarland showed off her wheels again. Pease hurled the ball to the backstop, and McFarland dashed to the plate, scoring with ease to give Maryland its decisive 2-1 margin.

Minnesota wouldn’t go out without a fight, though, a Partain two-out triple setting the stage for yet another possible extra-inning clash. But Brann sealed the contest at the circle, getting Kemmetmueller to whiff on a breaking ball and send both teams home with a split.