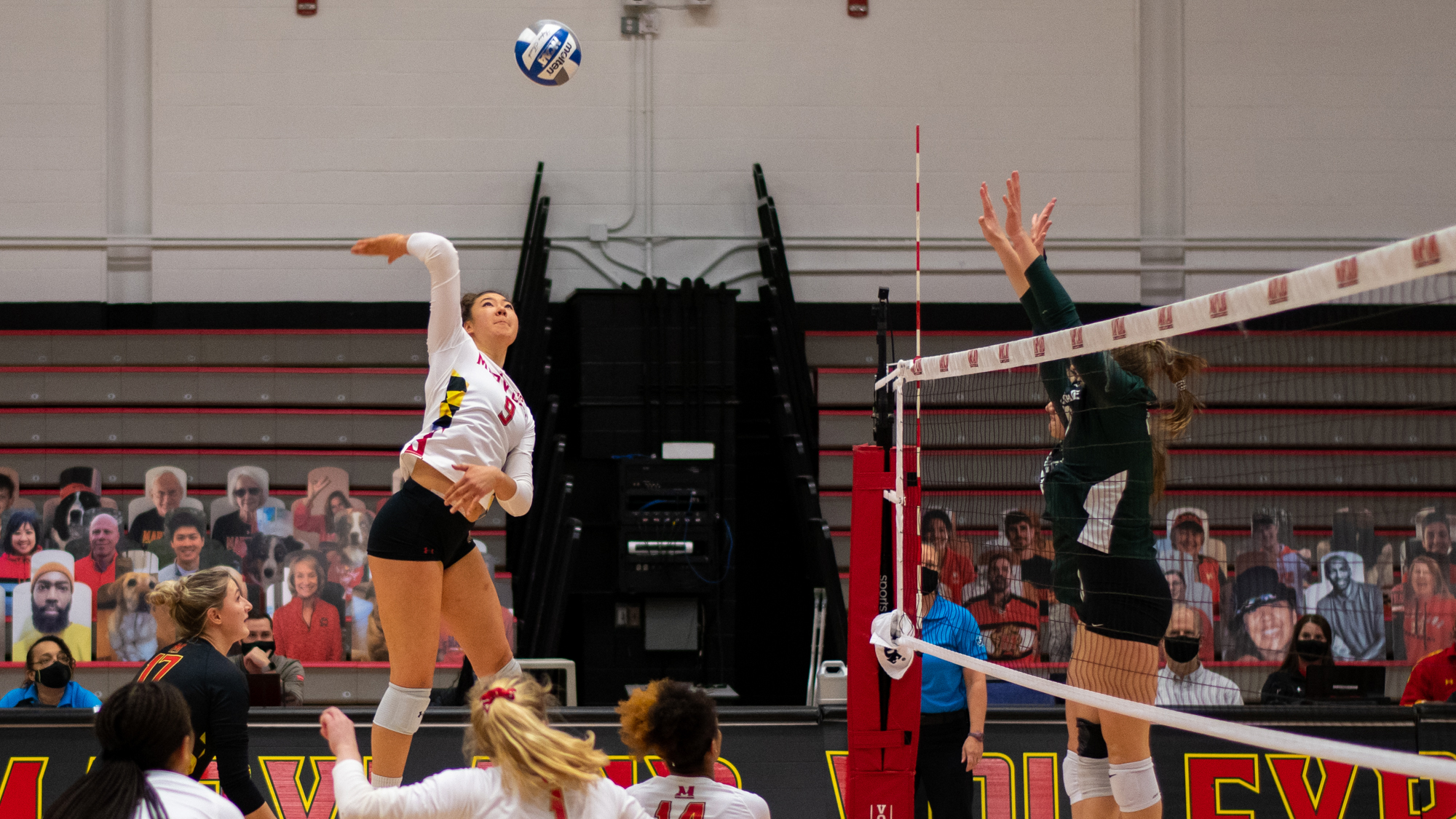 After a Michigan middle blocker’s mistimed kill attempt was palmed weakly back over the net, outside hitter Erika Pritchard sprung into action. Recognizing the Wolverines’ error, Pritchard backpedaled, placing herself in position for setter Nicole Alford to set her up for a kill of her own.

As Alford redirected the ball back into the air, Pritchard capitalized and pummeled the pass through the hands of two Michigan defenders. The ball nosedived, plummeting to the hardwood for yet another Pritchard putaway.

It was an all-too-familiar sequence for Pritchard, who flooded the stat sheet with 18 kills and 16 digs against the Wolverines on Friday.

More importantly though, Pritchard’s kill was the culmination of a gritty five-set outing for Maryland volleyball, which ousted Michigan for its first win of the season last Friday, 3-2.

“I think that it was really good to finally get a win … because it was something we knew that we could do all along,” Alford said.

For Alford, sticking to the scouting report and carrying out the team’s game plan was pivotal in notching the Terps’ first victory of the year — a game plan that involved feeding Pritchard on the offensive end early and often.

Pritchard started off the contest at a steady pace, registering three kills to just one attack error in the opening set. Pritchard duplicated her first set performance with three more spikes in the second frame, including a late kill that helped clinch a back-and-forth.

And after staying patient and picking her spots in the first two frames, Pritchard exploded onto the scene in the third set.

In possibly her most impressive sequence of the season, Pritchard racked up three spikes in quick succession midway through the third frame, en route to a five-kill third set that pushed her team to the brink of its first win of the 2021 season.

“Huge credit to my teammates,” Pritchard said. “They are so supportive of me and they put me in those situations that I can, you know, go get the ball.”

Pritchard’s hot hand carried over into the fourth and fifth sets, where she became too much for the Wolverines to handle in Maryland’s eventual five-set victory.

While it was Maryland’s first win of the season, it wasn’t the first time Pritchard has stepped up to lead the team with scintillating offensive play. Pritchard has been a model of consistency for the Terps throughout the season, averaging 3.44 kills per set whilst facing some of the toughest competition in the country.

And while Pritchard’s production has been invaluable for Maryland volleyball thus far, her leadership is what has really resonated with her teammates this season.

“I’ve been really lucky to play with her and have her as a mentor and my leader,” outside hitter Rebekah Rath said. “Erika is such an amazing person and teammate and player.”

For Rath, Pritchard’s leadership spans back to her freshman year, when she started alongside Pritchard at the outside hitter position.

“It was really nice because she always had my back and she showed me a lot about college volleyball that I didn’t know,” Rath said.

And Pritchard, who took on a senior captain role in the offseason, has treasured being a role model for the younger players on and off the floor.

“We just feed off of each other,” Pritchard said. “I just want to contribute to the team as much as I can and be that rock for them.”