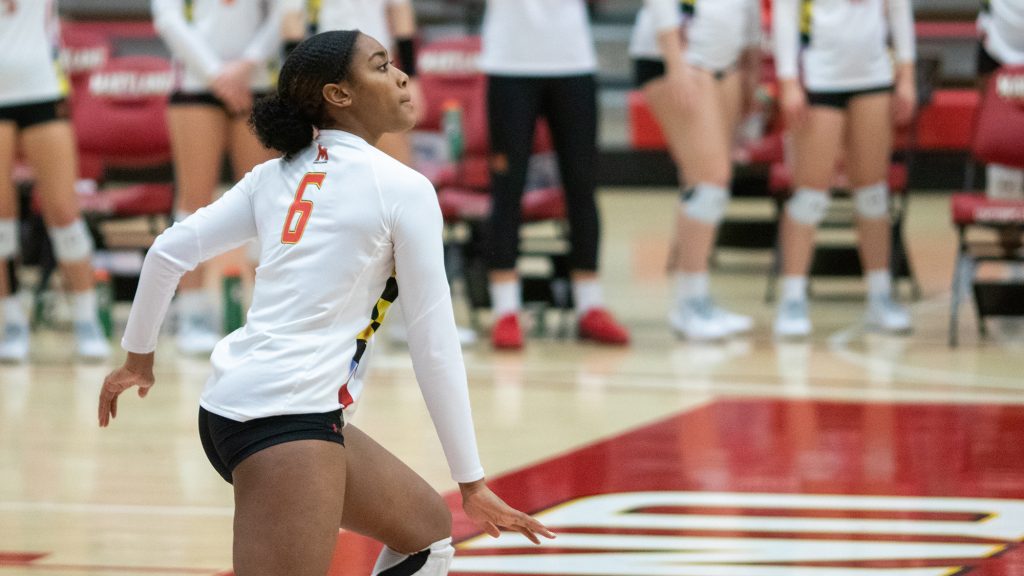 When Maryland volleyball entered its doubleheader against Michigan, it had certainly been tested — worn down by an unrelenting opening slate and desperate to snap its 0-8 skid.

And following two thrilling five-set marathons, the Terps had done just that. Maryland split its weekend series, besting Michigan for its first win of the season Friday before falling to the Wolverines the following night.

The Terps received considerable contributions from their regular cast. Outside hitter Erika Pritchard shredded Michigan’s defense with a combined 39 kills, and middle blocker Rainelle Jones became an imposing presence at the net, enjoying a 17-block weekend.

But Pritchard and Jones’ output alone wouldn’t be enough for coach Adam Hughes’ squad to compete with a stout Wolverines team. Both contests were complete team efforts, as Hughes relied on his youth to come off the bench to make an impact.

“We got a lot of … positive play from some of our subs off the bench,” Hughes said. “I think that will probably be the big standout.”

On Friday, it was sophomore defensive specialist Lexy Finnerty who stepped up.

After Michigan rallied in the fourth set of the first contest to force the match into a deciding fifth frame, the Wolverines jumped out to an 8-4 lead, seeming destined to coast toward a fifth-set victory. But after a service error by Michigan’s May Pertofsky handed the serve back to Maryland, it was up to Finnerty to will her team back into the set.

“Finnerty came off the bench and did a phenomenal job,” Hughes said. “[She] just kind of flipped the momentum and that was the difference.”

Behind five straight Finnerty serves, including an ace that pierced the Michigan defense, the Terps snatched the late lead right back from the Wolverines — a lead they would not relinquish.

“I think Lexy really stepped up in that moment,” veteran setter Nicole Alford said. “She added a lot, and I think it boosted the confidence of the team and that we knew that we could take this match and we were going to win.”

Though Finnerty served as the young spark plug for the Terps on Friday, Hughes turned to freshmen Laila Ricks and Sam Csire to help shoulder the load in Saturday’s rematch.

Csire, who saw a large increase in minutes on Saturday, responded with a career-high five kills. And Ricks, known best for her defensive prowess in previous matches, filled up the stat sheet with three kills, two assists, five digs and four blocks that evening.

Csire and Ricks’ increased playing time was a culmination of hard work put in during practice, Hughes said.

“We’re not getting youngsters burn just to get burn, they’ve earned some of these opportunities,” Hughes said. “[When] someone’s struggling, that’s what good teams do — they have depth to throw somebody in, and both Sam and Laila I thought did a good job coming off the bench.”

And although their efforts didn’t amount to a win on Saturday, Hughes’ confidence in his youth gave the young players the chance to find a rhythm on the floor.

“[Coach Hughes] encouraged us and so did all of our teammates, which I think really boosted our confidence,” Ricks said. “Especially it being … the first time we’ve played in a close game or as much as we did.”

These crunchtime minutes also came to the delight of Pritchard, Maryland’s senior captain.

“I’m really proud of them for stepping in … just contributing to the table as much as they can,” Pritchard said.