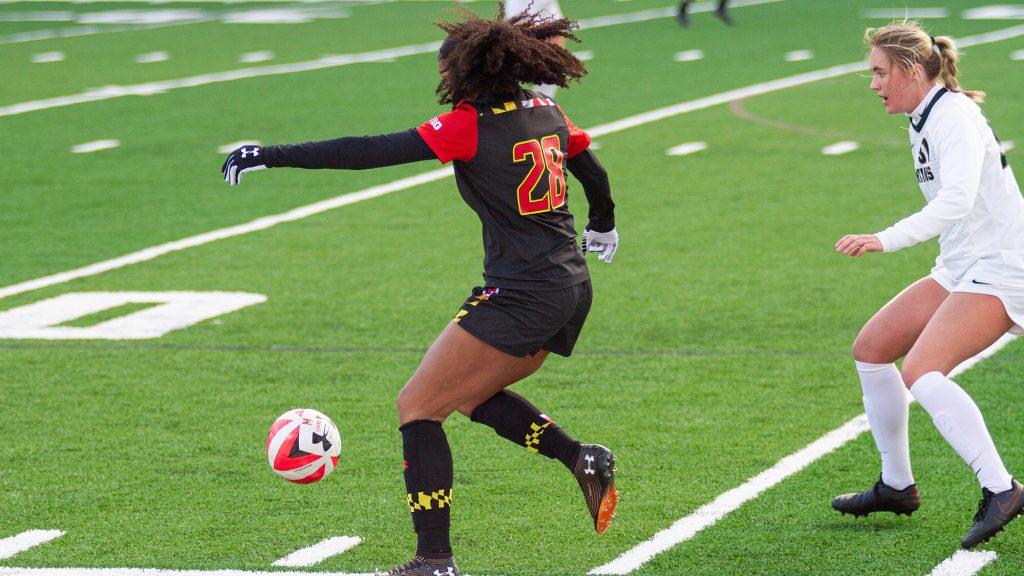 As she weaved past two defenders, the ball ricocheted off her shin and flew into the net, saving the Terps from losing their season opener.

“I kinda mishandled it, but I kept going though, and it ended up being a goal,” Dayes said. “So, I’ll take it.”

Although the game ended in a draw, Dayes’ goal, along with the Terps’ aggressive play throughout the entirety of the game, showed why she could be a threat in the Big Ten this season.

The Big Ten had pegged Dayes — along with her twin sister, Malikae — as a player to watch, and on Saturday she lived up to that billing. Though her goal stood out on the stat sheet, her constant hustle and aggressive running created problems for the Spartans all evening.

“She really carried us up front tonight, and is really setting the leadership of the front line,” coach Ray Leone said.

But for Dayes, that performance is the culmination of three years of growing into the team.

In the five games she played as a freshman, the Brampton, Ontario, native scored three goals and had two assists. Her strong performances against Gardner-Webb and Furman that season earned her a Big Ten Freshman of the Week nod in late August. However, a knee injury derailed what was a strong freshman campaign.

As a sophomore, having recovered from her injury, Dayes started in eight games and appeared in all 19. She was an active presence around the net, regularly getting shots off — but didn’t get her name on the scoresheet.

But Dayes found her form as a junior. She secured herself as a strong competitor in conference play and started in 19 games. Dayes scored five goals throughout the season and contributed to 11 points total. The season was highlighted by a dramatic game-winning goal against Georgia Southern to open the season.

And that knack for scoring big goals was on show again Saturday.

“Every game I think I have the same mentality,” Dayes said. “It just happens to be the opener.”

Dayes’ goal saved the Terps in a difficult contest Saturday evening. Being forced to play on turf instead of grass — and in below-freezing weather conditions — Maryland managed to put up a gutsy performance against the Spartans.

“It was a good hard-fought game between two teams,” Leone said.

Throughout the match, Michigan State appeared to be the dominant team, keeping the ball on Maryland’s side of the field for a majority of the game. However, Maryland’s defensive squad, led by senior Anissa Mose, managed to hold strong, only letting the Spartans breach once.

And just as it seemed that the Terps would walk away with a loss, their forwards began to charge the Spartans’ net with more force. Hope Lewandoski, floating around near the goal, sent a pass back to Mikayla Dayes, whose goal salvaged a draw and drew a rowdy response from her teammates.

Still, despite her last minute heroics and strong performance, Dayes’ focus remains on winning. Scoring goals is just part of the job.

“I’m disappointed about the tie,” said the senior. “But, you know, we still have so many games to go so we’ll just focus on those ones.”