Maryland men’s soccer relied on its freshmen against Penn State 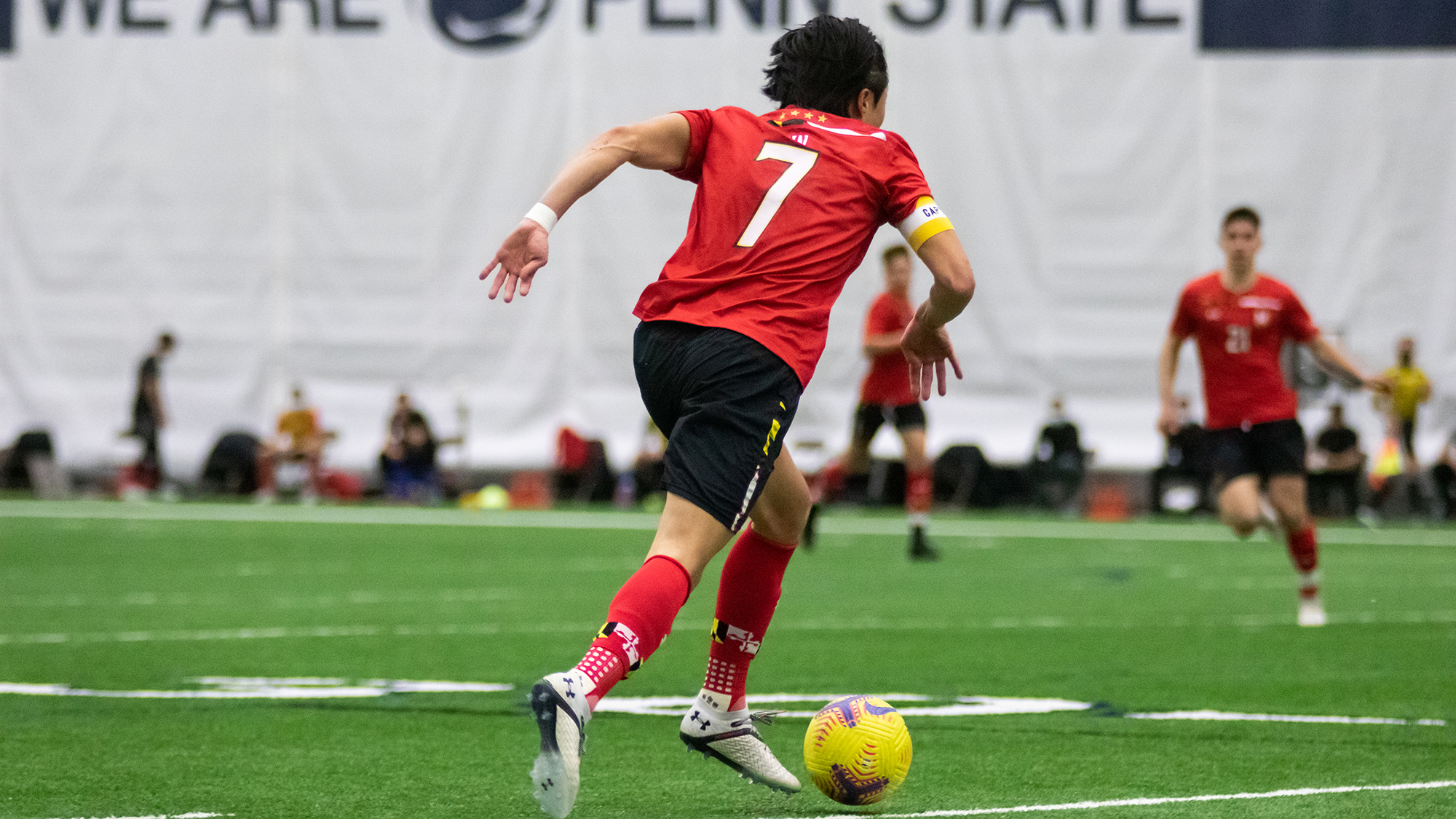 Forward Jacen Russell-Rowe simply jogged back to the center circle, anticipating the next kickoff.

His body language gave no indication of what he had just done: fired a 30-yard strike into the top left corner in his Maryland men’s soccer debut. But despite the cacophony of excitement and adrenaline around him, the freshman treated the goal like any other.

Russell-Rowe’s strike was one of many standout moments from freshmen in an otherwise disappointing game for the Terps, with the first-years showing out amid a slew of slower performances.

“We know how special those kids are, and it was just a matter of time,” forward Paul Bin said.

Maryland tried to play attacking soccer at Penn State. But with an 11 that had never started a game as one unit, the Terps looked disconnected. Passes were wayward, tackles mistimed, movement not quite crisp. The 3-2 loss seemed to be a fair result.

However, the four least experienced players on the pitch made the biggest impact. Russell-Rowe and midfielder Joe Suchecki both found the back of the net. Ben Bender was Maryland’s most confident midfielder in possession. Goalie Jamie Lowell could do nothing about the three Nittany Lions’ goals but made some crucial stops and looked a commanding presence in the second half.

“I was pleased for them to get their feel of Big Ten soccer,” coach Saso Cirovski said.

The Terps conceded early on thanks to a calm finish from midfielder Andrew Privett. Twenty minutes later, Penn State found the net again. In response, Maryland abandoned its possession-based approach. The Terps instead made use of a wide pitch, swinging diagonal balls out to wingers and over the top to their lone central striker.

Those switches made Maryland a more dangerous team, with freshmen functioning as crucial cogs. Bender often found space in the middle of the park and looked for balls to Bin on the left wing. Those passes found their mark several times, allowing the redshirt senior to attack the opposing fullback one-on-one.

And though Bin couldn’t find the back of the net, Bender’s creativity was crucial in an evening in which the Terps sorely lacked it.

“Ben was running the show in the midfield,” Bin said.

That tactical switch also awakened Russell-Rowe. Though his goal was one for the highlight reel, the Canadian showed a propensity to pull off a number of play styles. He dropped deeper into the midfield at times to link up with Bin and Bender, executing quick passes around Nittany Lions’ defenders.

When needed, though, Russell-Rowe flashed another side of his game, running in behind the backline with deceptive pace. That was on full display 20 minutes in, when he received a floated ball from defender Nick Richardson and was taken down by a Penn State defender to earn Maryland a penalty kick.

In the absence of usual front man Eric Matzelevich due to injury, that play was vital in helping the Terps stick around.

But Russell-Rowe wasn’t the only freshman to keep Maryland in the game. The scoreline wasn’t kind to Lowell, but the Seattle Sounders Academy product showed promise in his first start between the sticks. A low-diving save 24 minutes into the second half denied what appeared to be a certain Nittany Lions’ goal — one that would have put the game well beyond reach.

“He was confident, distribution was good. He was managing the box and made one great save,” Cirovski said.

Though the Terps couldn’t find a crucial third, that trio of players — as well as some flashes from Suchecki — kept Maryland in a contest that looked well beyond its reach after 40 minutes.

So, after one game, the newcomers looked more than comfortable. Once the rest of the Terps get on the same wavelength, Russell-Rowe and company could have more reasons to celebrate.

“I think they were our best three players tonight, to be honest,” Bin said. “They were outstanding.”