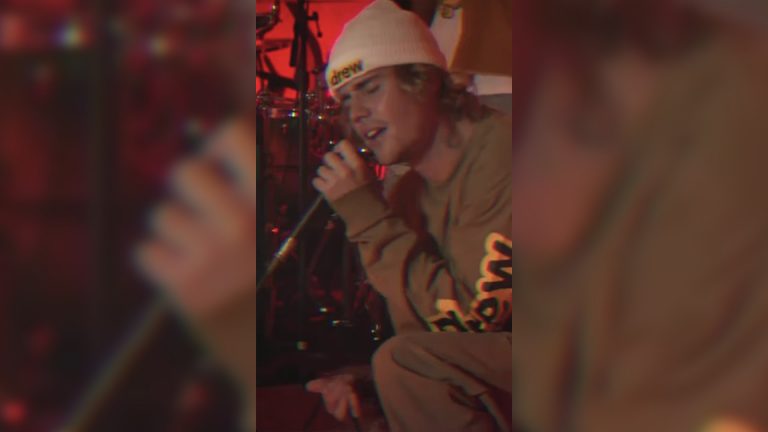 Justin Bieber performed via TikTok on Feb. 14. (Screenshot via YouTube)

In the “first-ever long-form concert event on TikTok,” Justin Bieber performed most of his 2013 compilation album Journals on Sunday. With new backing vocals highlighting a more mature voice, Bieber crooned away while wearing his streetwear brand Drew House during the performance.

A VHS filter overlaid the high-production video. Lit candles surrounded the instrumentalists behind him during the Valentine’s Day show. The event took place at the drew house in California and, at one point, had over 200,000 viewers.

There was something special about this performance, outside of it being the live-performance debut of Journals. Bieber seemed more refined as a singer. Through this show, it was obvious there had been a shift since this album’s era. No more peeing in mop buckets or egging houses. The Bieber we’re seeing now is refined and grown-up — and has the life experience to prove it.

Passion shines through in his singing, and it’s impressive that he dug this album out of the archives to perform it, especially when most of the world is yearning for anything vaguely resembling that buzzing concert-going feeling. The singer’s band added to the euphoric vibe, the live instruments adding a joyful fullness to the album’s sound.

[Review: The Staves’ ‘Good Woman’ is a melancholic meditation on growth]

Hearing him sing Journals live definitely brought back waves of nostalgia. As a former Belieber, my seventh-grade year consisted of looking forward to every Monday of late 2013 because of #MusicMondays (Bieber’s 10-week, one-single-per-week music campaign) and playing this album on a loop.

Fans often cite Journals as Bieber’s best album. Technically a compilation album, it has ten prereleased singles and five new singles. It came a little over a year after his album Believe, which showed a slightly older Bieber sans the swoopy haircut, rapping his hit single “Boyfriend.”

But Journals was his first serious dive into R&B. Although Bieber had played around with other genres besides bubblegum pop in his previous works, Journals was different. He traded sappy sentiments for forgiveness ballads and sensuality. Dare I say it? Journals was a cultural reset.

While there were moments where Bieber just bit from hip-hop culture, the album’s loops, slow beats and iconic samples (such as the Isley Brothers) put it on a different level than anything he had done before.

There was an immense amount of vulnerability shown in the 15 tracks. The lyrics were personal and contained self-reflection. “First, I’ll acknowledge, all trust has been broken/ A successful recovery, I pray for us at night/ Bless me with a second chance, never thought I’d see your face again,” he sings in “Recovery.”

[Review: Even as a lifelong listener, I’m disappointed with Foo Fighters’ 10th album]

Though not revolutionary in and of itself, it showed development within his discography and his path as a musician. He was leaving his younger self behind and stepping into a new era in his career, where he could admit his wrongs and strive to be a better person.

This maturity found itself front and center during the live performance as mentioned earlier. My only two critiques were that the performance had pitch-correcting software, and that he didn’t perform the entire album.

When singing “Swap It Out,” it became obvious that Bieber had some pizazz on his mic, which was slightly annoying because solely hearing his unedited voice would’ve made this livestream even more of a masterpiece.

Whether it be my nostalgia, his growth as a singer and person, missing concerts or a mixture of all three, Justin Bieber’s live performance of Journals was a highlight in virtual concerts during the pandemic and is a must-watch.