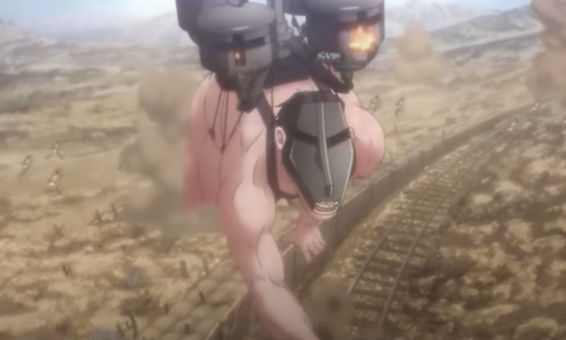 Hajime Isayama is the writer and illustrator of 'Attack on Titan.' (Screenshot via YouTube)

The final season of Attack on Titan has finally arrived and halfway through, it’s been an epic, dark ride into the conclusion of hero (or villain?) Eren Yeager and the worlds of Marley and Paradis.

The animated show focuses on a group of people known as Eldians, who live on the island of Paradis behind walls. Across the sea are the Marleyans, who have persecuted Eldians and banished them to the island due to the Eldians’ ability to harness Titans, powerful humanoid creatures. The latest segment follows Eren Yeager and other Eldians many years after season three, as they work to free themselves from the island and defeat the Marleyans.

The new season kicks off without a single familiar face. Not one of the characters we’ve come to love over the past three seasons makes an appearance, but their absence makes room for an interesting collection of new characters that mirror the original crew in many ways. The similarities between Eren and newcomer Gabi, for instance, provide perspective on the previous seasons, shifting a black and white plot into more gray terms.

[A definitive ranking of niche game shows on Netflix]

The scope of the world here is far greater than before, with multiple nations now in the picture, which provides a political drama along with the conflicts with our characters. I especially enjoyed the increase in scale because it raised the stakes of the plot. A grandiose feeling is what made me enjoy the show in the first place, and season four only heightens that feeling.

The new season is more mature than the previous seasons, almost more adult. Gone are the kids filled with fear and remorse; the characters are grown now, and there’s a clear loss of innocence with everyone. They’ve become warriors, striving to complete their mission no matter what gets in their way. All of this is made very clear by the violence.

If you thought the first three seasons were gruesome, season four takes things to a different level. The imagery is brutal, and it’s clear that this is an all-out war with no mercy. Watching Eren’s Titan and the new Warhammer Titan battle it out was one of the best fight sequences of the show so far, showing how far he’s come from being a naive kid. The new Eren is strong, cold, calculating and genuinely terrifying at times. Even Armin, the innocent little boy from season one, uses his abilities to destroy a port along with countless civilian lives. After seeing all the damage they’ve done, it’s hard to keep rooting for them, but the moral dilemma is what keeps the story fresh and interesting.

[Through its fanfare and flaws, here’s what students think of ‘Cyberpunk 2077’]

But the highlight of the season so far has to be the relationship between Reiner and Eren. In past seasons, we’ve come to see Eren as a hero and Reiner as a villain, but in this season, it’s hard to maintain those roles. Both characters do what they have to in order to save their people, but both commit unatonable crimes. In the name of patriotism and revenge, they’ve both become monsters. So whose side should we be on? As the season progresses, it’s increasingly difficult to choose, and I can’t wait to see how the two characters’ relationship continues.

Halfway through season four, Attack on Titan is everything that worked from seasons one to three elevated to a new scale. It’s epic and thought-provoking, and with so many mysteries unsolved, there’s plenty of twists and turns left for us to experience in the conclusion to this saga.