Review: ‘Strip Down, Rise Up’ shows pole-dancing can be therapeutic and empowering 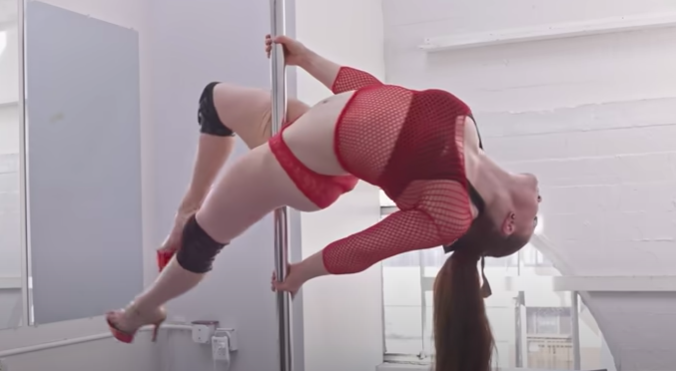 'Strip Down, Rise Up' is now streaming on Netflix. (Screenshot via YouTube)

“How does pole-dancing help you become empowered in the rest of your life?”

That’s the question Strip Down, Rise Up answers. The film follows a group of women going through a beginner’s program at S Factor, a feminist pole-dancing studio run by actress Sheila Kelley.

As a viewer, I was immediately drawn to one specific detail in the studio: There are no mirrors. I grew up attending a pre-professional ballet program, where I spent eight years of my life critiquing how I looked in dance studio mirrors, trying to perfect any imperfection and noting any flaws. But S Factor isn’t about perfection — it’s about healing.

Kelley’s mission is to empower women by using pole-dancing to reclaim their bodies, their sexuality and their lives. Without mirrors and without judgment, the women go on a cathartic healing journey propelled by the power of the pole. Over the course of the film, we are introduced to the stories and traumas which led them to the dance studio.

I’ll admit, it was heavier than I expected. The students include an ex-gymnast who was abused by Larry Nassar, a newly widowed mother, a cancer survivor and several women who were sexually assaulted. While the stories are important, the weight of some of the topics was a lot to bear as a viewer, and I had to pause and come back a handful of times.

Even though the documentary does not issue a content warning at the beginning, there are very difficult conversations about rape and sexual abuse that viewers should know about prior to watching.

Nevertheless, it is fascinating to watch the healing process unravel over the course of the film. By the final scene, we get to see those same women break free from their trauma and reclaim their bodies for themselves. By the time of the course’s graduation ceremony, their radiance is infectious.

One woman is an attorney and practices family law pro bono. In one scene, while you watch a couple perform at a pole-dancing competition, you hear the man’s voiceover telling you he has a doctorate in theoretical physics and neuroscience.

I appreciated that the film prioritized telling each individual dancer’s story. This background is more than just extra detail; it normalizes the practice of pole-dancing as a therapeutic art form.

Even the professional pole-dancers in the film appreciate the healing powers it offers them. “It’s therapy, it’s a release,” professional aerialist Jenyne Butterfly told the camera.

That testimonial goes to show that pole-dancing hasn’t been reinvented by Kelley or S Factor to give it greater purpose. It’s inherently empowering and therapeutic, whether recreational or competitive.

Not only is it therapeutic, but the reclamation of sexuality through pole-dancing also helps these women break from the restraints of living in a patriarchal society where women are taught to exist in the context of men.

Watching Kelley and the other instructors guide these women on such an impactful journey was so powerful. I was skeptical when I set out to watch the documentary — but now, I’m even tempted to try pole-dancing myself.

The movie was released direct to Netflix on Feb. 5 and it’s available for streaming there. Every woman in this film has an important story to tell, and I highly suggest watching to hear what they each have to say.