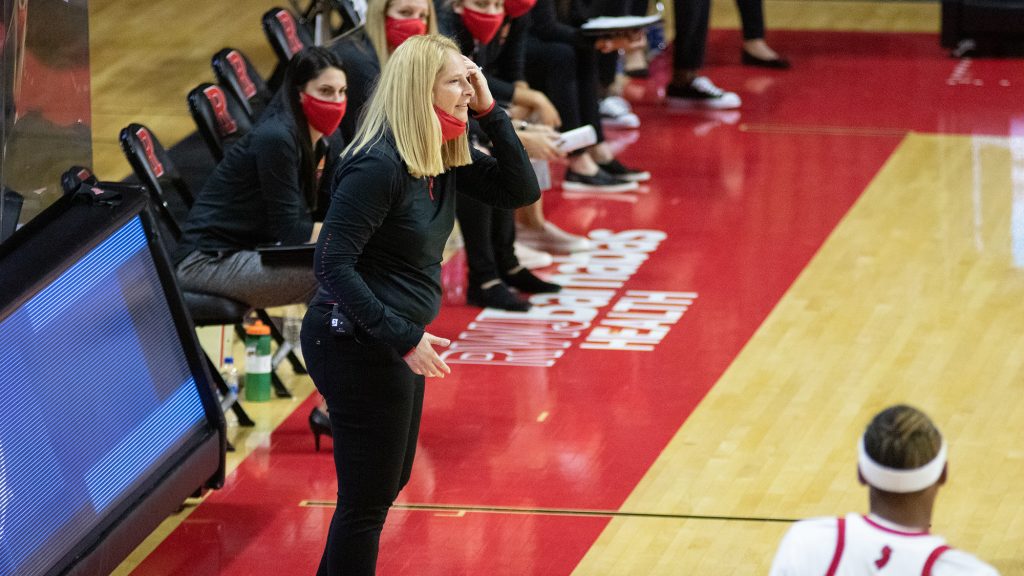 Ashley Owusu picked up a loose ball eight minutes into the first quarter and veered toward the rack, undeterred by the Nebraska defenders that surrounded her.

Owusu crossed a Cornhusker defender at halfcourt, opening up space for her to attack. And even as another defender barreled toward her near the hoop, Owusu drove hard, finishing through contact.

A possession later, Owusu found herself in transition again. This time, though, she looked up and found Chloe Bibby for an open three pointer. Bibby netted, pushing Maryland women’s basketball’s lead to 14. Owusu finished with a near-triple double, with 25 points, seven rebounds, and seven assists, another impressive showing in a historic night filled with them.

The Terps sprinted towards a 95-73 drubbing of Nebraska, using a first half victory to secure head coach Brenda Frese’s 500th victory at Maryland. The win makes her the program’s all-time wins leader. In a season where her team has been an offensive juggernaut, it’s only fitting that a dominant offensive performance would push her to the record breaking victory.

“Incredible, and like I told them after the game, there’s not another team I would rather celebrate this milestone with,” Frese said. “When you look at the resiliency of this team and what they’ve been through this season I think it’s really appropriate that we would be able to celebrate this 500th win.”

Despite a 10-day layoff, Frese’s squad didn’t show any rust to start the game, shooting 64.7 percent from the field in the first quarter. Maryland was fueled by a 12-0 stretch early in the first, turning an early two-point deficit into a 10-point gap.

“We thought it was important to sprinkle some 10-minute-quarter scrimmages all weekend to practice, but the conditioning level is really really good here with the team,” Frese said. “And I thought the way we jumped out on them you were able to see that there really wasn’t any rust.”

With just under two minutes gone, Nebraska’s Ashley Scoggin tried to save an errant pass but threw it right to guard Katie Benzan, who eagerly grabbed the gift and raced down the court for an uncontested layup. By the end of the first quarter, the Terps held an 11-point edge, one that would continue to swell in the second.

Chloe Bibby, Diamond Miller and Mimi Collins combined for 20 points in the second quarter as Frese’s squad rolled past a stretched Cornhuskers defense. The Terps hit nine of their 16 shots in the frame and entered halftime with a 51-33 lead.

“I thought it was an incredible thing, when you just talk about the unselfishness of this team,” Frese said. “I thought each and every quarter I thought they played for one another.”

But in the third quarter, Nebraska pushed back. A 10-0 Cornhusker run cut Maryland’s lead to just 10.

Maryland quickly turned things around, though.

Mimi Collins hit a pair of jumpers, Owusu found Diamond Miller for a three-pointer and soon Maryland was back in control. Miller would finish with 24 points Sunday evening.

By the end of the third, the Terps held a 27-point lead, bolstered by a 21-4 run that quelled Nebraska’s comeback efforts.

Maryland kept the intensity up in the fourth frame, cruising to a 22-point victory. And as the final buzzer sounded, Frese pointed up to her older sisters in the crowd, fist-bumped her assistant coaches, calmly taking in her momentous achievement. Then, the entire Terps roster, headed by Angel Reese and Collins, mobbed her as the team celebrated an achievement 19 years in the making.