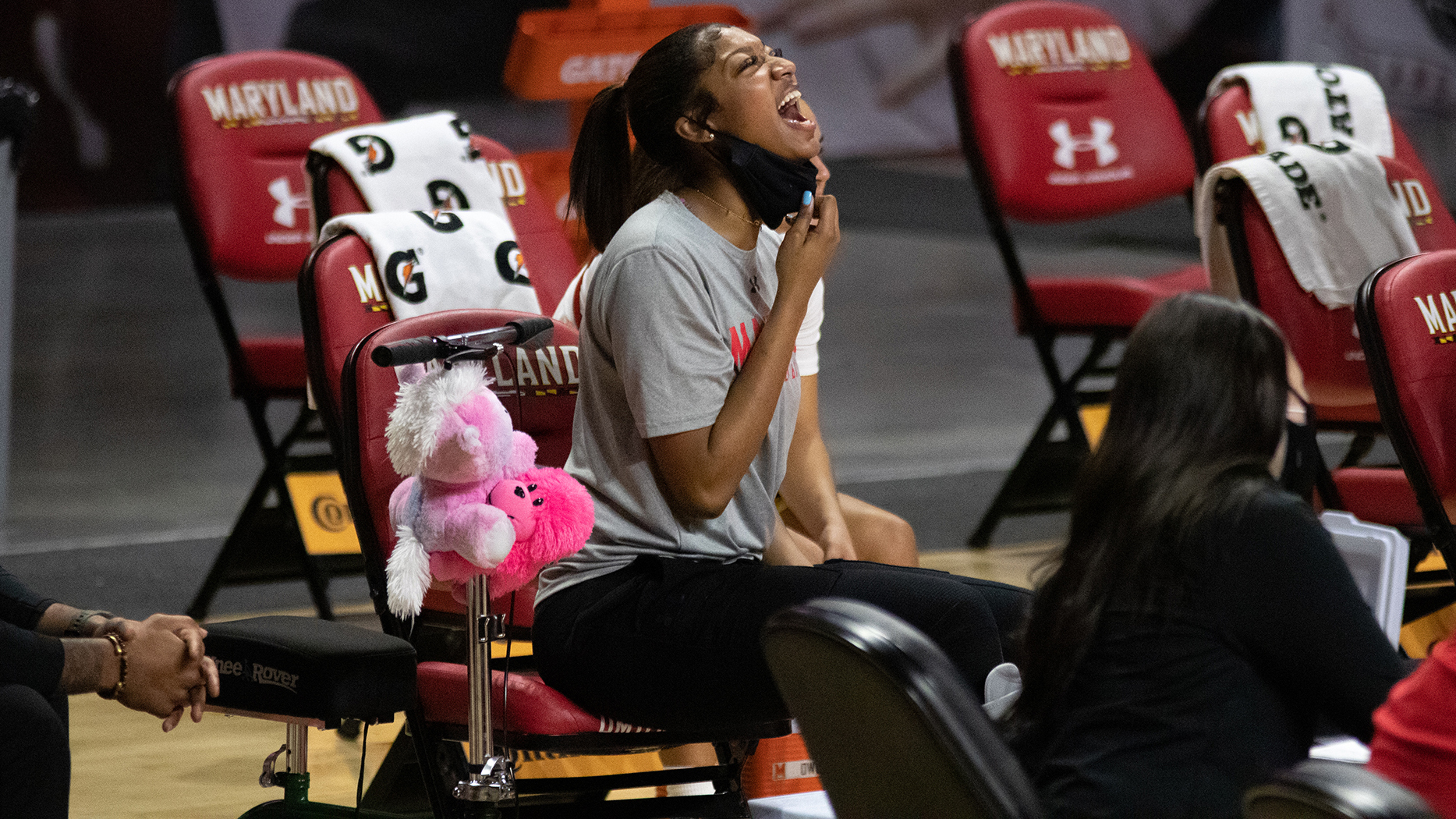 The near-empty Xfinity Center provides new viewpoints. Aspects of the game that would’ve been obscured by a crowd of fans are now all on full display — trash talk between opponents, complaints and pleas to referees and minute coaching adjustments.

But when Maryland women’s basketball plays, two voices rise above the rest.

The first, Angel Reese, is last year’s No. 2 recruit, a budding star whose freshman season was derailed by a foot fracture. The second, Keith Pough, is a former fringe NFL linebacker known for playing gospel music during team workouts who now serves as the team’s assistant director of basketball performance.

Together, the pair have provided energy normally supplied by fans and, in the process, have kept Reese engaged in a season when she can neither play nor practice.

“Especially for me, being injured, I know I can bring energy every day,” Reese said.

The two are engaged in games from the opening tip, providing encouragement and advice for the five Terps on the court. Pough, who is instantly noticeable on the bench with an impressive beard, uses his experience as an athlete to inform his tips.

“Going through scouting reports and knowing that scouting on your personnel, you know I was on the football side of it, but it’s all the same thing. People have tendencies,” Pough said. “And I think … being able to communicate in this fashion in basketball is a tremendous help.”

With so much going on during any one game, having an extra set of eyes telling players how to play or what position to be in can be invaluable.

Reese has done that as well, providing insight to players who have asked for her opinion from the sideline.

“Diamond and Ashley are the two people I talk to most during a game,” Reese said. “We need everybody on the team, so I know how to get each player a different way when we need them the most.”

But the importance of having the bench engaged in the game goes beyond communication. In a season with no fans, Maryland knows it has to generate its own energy to maintain a high level of success.

The duo likes to celebrate as well. After a beautiful pass, Reese made a pair of eye-goggles, signifying that “nobody saw that pass coming,” but the celebrations went beyond just that.

“It just depends on what happened: So like, if somebody throws a good pass, we have a dime in our pocket and we drop it like … a dime,” Reese said. “Making threes, we’ll do one, two, three. How many do we have? One, two, three.”

The engagement has also been pivotal for Reese to stay connected with the team despite being unable to step on the court. The freshman, who watched the Wisconsin game without a walking boot, has stayed positive throughout a difficult opening act to her Maryland career.

Part of that has been due to Pough’s influence.

“He always sent me motivational things to help me stay up and just to get back,” Reese said. “He’s just always been there, positive energy for me.”

That’s been important, and as Pough noted, despite how frustrating this experience could be, she could still help her team and her teammates.

“It’s difficult because you are injured, you are somewhat isolated,” Pough said. “The best athletes are those who can get past that mental roadblock and say, ‘I still got to be here for my team in whatever capacity.’”

And even as Reese finds herself inching closer to returning to the court, she and Pough will still be heard, echoing through the empty arena, bouncing off unfilled seats and motivating the team.