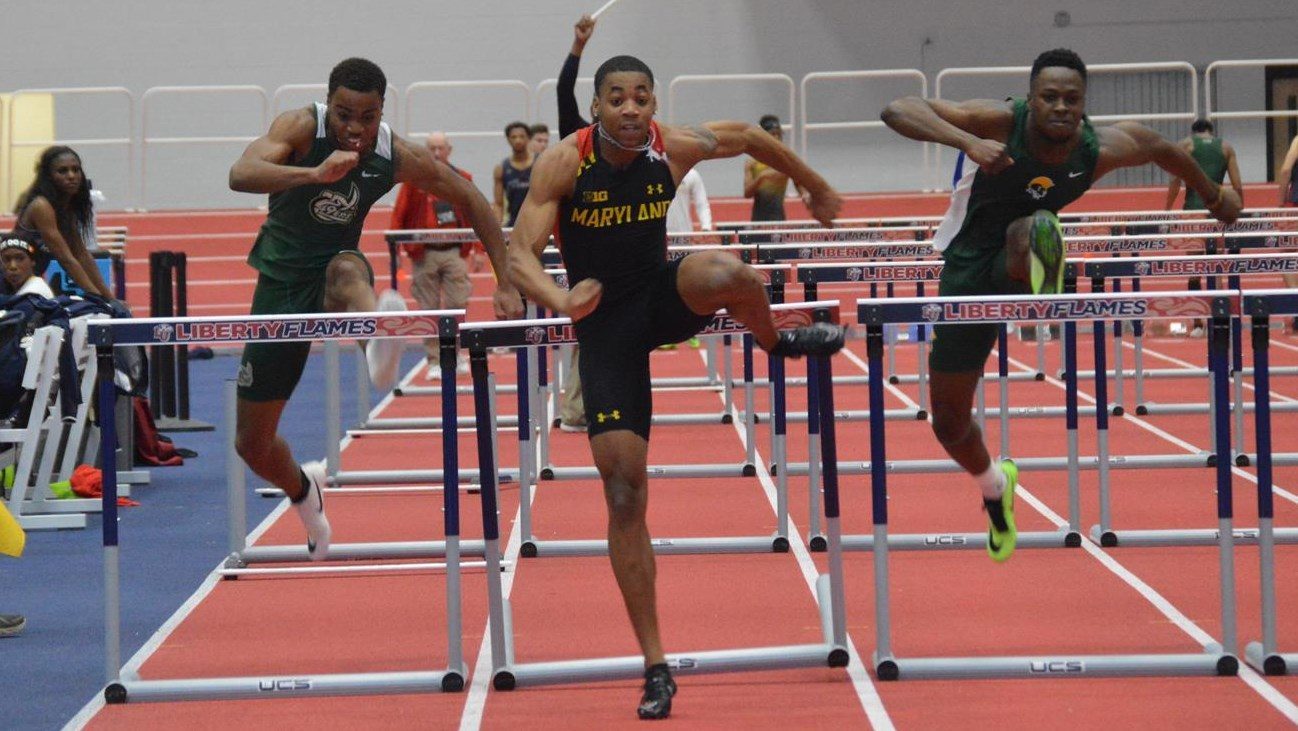 Sophomore Caleb Dean notched a 7.89 during the 60m hurdles, the second-best time in Maryland track and field history. (Photo courtesy of Maryland athletics)

It was a weekend of PRs for Maryland track and field as it traveled to Geneva, Ohio, for the Spire Institute Big Ten Invitational with new bests from 12 athletes in eight events.

But the story of the weekend was sophomore Caleb Dean, who blazed past the competition for a first place finish in the men’s 60m hurdles with a time of 7.89 seconds, setting a new PR in the process.

“I told myself that all I want for Valentine’s Day is a PR, and that’s what I got,” Dean said.

Not only did Dean break a PR, but his performance Saturday now ranks second all time in Terps history.

Also strong on the hurdles was Nadia Hackett, who finished fifth with a time of 8.63s.

The weekend’s meet served as a change of scenery for Maryland, which was not competing in State College, Pennsylvania, for the first time all season. While coach Andrew Valmon found comfort in the routine meets at Penn State, for Dean, the trip to Ohio was like a breath of fresh air.

“It felt good, new atmosphere, new team, new track. I was lowkey tired of going to Penn State,” he said. “It got me more motivated to run a faster time.”

It started with sophomore Chloe Royce, who competed in five different events to take a third place finish in the women’s pentathlon with 3401 points.

While Maryland was without its throwing team, which has been dominant all season, the Terps still had several strong showings on the track.

Among them was Bria Mack, who placed fourth in the women’s 60m dash with a time of 7.52s. However, her performance in the preliminary round was even more impressive, as the senior finished with a PR of 7.49s, giving her the fourth-best time in school history.

Mack fared well in the women’s 200m as well, finishing in 24.82s to place sixth. Jaida Smith – who finished first in the same event during last week’s meet – was not far behind with a time of 24.90s to finish eighth.

Wherever Maryland competed, PRs seemed to follow. Kami Joi Hickson enjoyed a new best in the women’s 800m with a time of 2:12.32s and Samantha Facius, Amanda Eliker and Sophia Zell all set PRs in the women’s mile.

In continuing the trend of broken records for the men’s team, Maxwell Myers’ PR of 1:52.67 in the men’s 800m gave him the seventh-best time in program history.

Meanwhile, Joe Ewan and Kamari Trotz had strong showings in the men’s 200m, finishing with times of 22.07s and 22.15s, respectively. That time was a personal best for Trotz, who, along with Ewan, placed second and first in the men’s 60m earlier this season.

Travis Valmon had a successful day on the track as well, setting a PR in the men’s 400m with a time of 48.72s.

Whether it be in Pennsylvania or Ohio, it seems like the location of the venue is of no matter for the Terps’ that continue to break records across the board. Maryland will look to keep its momentum as its return to State College next weekend.